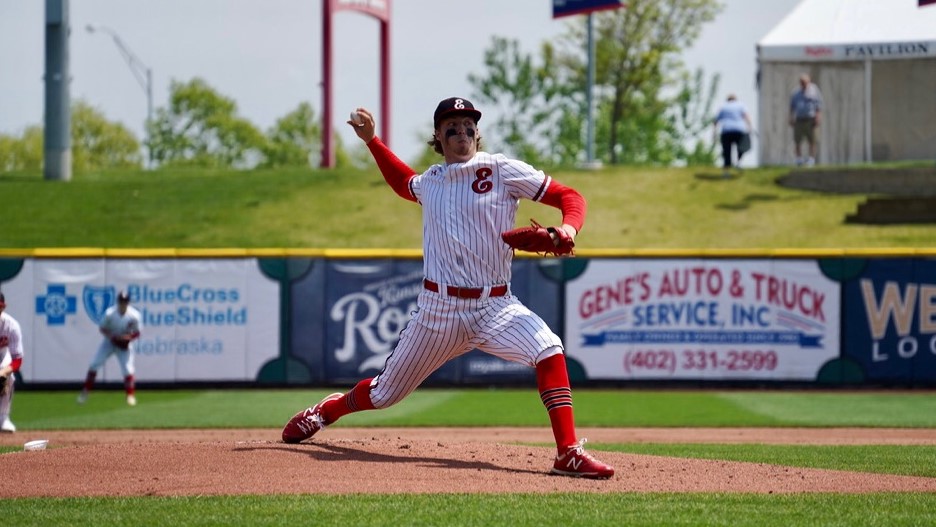 Drew Christo recorded a miniscule 0.43 ERA and had a state-leading 92 strikeouts in 48 ⅔ innings pitched for Elkhorn High School this past spring. (Credit: Scott Avery)

LINCOLN, Neb. (BVM) ⁠— Passing on the opportunity to become a professional baseball player straight out of high school isn’t the easiest decision for a teenager to make, but it’s one that University of Nebraska recruit Drew Christo was comfortable with even before last month’s MLB Draft began.

As a 6-foot-4, 225-pound right-handed pitcher who already throws in the mid-90s, Christo was rated as Nebraska’s top high school prospect, and he knew that major-league teams would be calling with offers that might entice him enough to consider changing his plan of playing for the Cornhuskers. But the 2021 Elkhorn grad had a figure in mind heading into the draft, and although some teams’ offers were tempting, they didn’t quite match his price tag, which is why Christo announced on the third and final day of the draft that he was choosing school over the pros.

“Both options were great options and I feel like [they] could’ve been the right thing for me,” Christo said. “But at the end of the day, I placed a value on myself heading into the draft and stuck by it. Teams got close, but I wanted to stick to my guns and really, stick to my beliefs and my value and what I was worth. Coming to Lincoln has been a dream of mine since I was a toddler and so to actually make that dream come true and be able to wear the scarlet and cream these next three years is going to be something that I’ll always treasure.”

Wanted to say a huge thanks to all the scouts who took valued time to come and evaluate me and pursue relationships; however, going to school is the right choice for me at this point. Thank you again! Let’s work, Lincoln! #BoltEra #GBR 🌽

Wearing Nebraska’s colors means a little more to Christo than it would to the average Cornhusker commit. He’s the son of Monte Christo, a former Nebraska backup quarterback who was a member of multiple Husker national championship teams in the ’90s. Needless to say, it would’ve taken a lot for a big-league organization to prevent Drew, a lifelong Husker, from following in his father’s footsteps and becoming a Nebraska student-athlete himself.

“It’s something that I grew up loving and as I’ve gotten older I’ve just continued to love more,” Drew said. “It means a lot more coming here than it would be going to any other baseball program. Obviously, I want my team to have success because I’m a part of it, but I also want this team to have success because I’m a Nebraska fan. I think that’s why this is going to be a great four years here and I think a lot of people are bought into wanting to be Huskers on this team which is why they’ve had so much success these last few years under Coach [Will] Bolt and hopefully that trend can continue the next couple of years.”

The arrow is pointing up for Nebraska baseball, which is coming off a season in which it captured the Big Ten title and pushed No. 1 Arkansas to a decisive game in the NCAA Tournament before falling just short of super regionals. The Huskers have one of the country’s top incoming freshmen classes to complement a strong core of returning players and help raise expectations for the team. The fact that Drew can now be included in Nebraska’s plans over the next three years also gives Husker fans all the more reason to be excited.

“The atmosphere around this place is a lot different than it was a couple of years ago,” Drew said. “Everybody on the team has big aspirations for these next couple of years. With the chance they had last year almost getting to the super regional, guys here want to make that the standard and not something that just happens every once in a while and I think with this team and with this coaching staff and the support of everybody in Lincoln and the surrounding area, I think that’s something that can become a reality so that’s what we’re going to be working toward.”

Drew’s decision to delay his professional baseball career and go to college isn’t too surprising when considering his off-the-field abilities and aspirations. As a student who scored a 35 on his ACT and maintained a 4.0 GPA while ranking first in class at Elkhorn, Drew is far from the typical baseball prospect. He wants to be a doctor whenever his playing days are over.

“I have a passion for medicine,” Christo said. “I really want to stay involved in sports just because sports have done so much for me in my life, and so something I’m hoping to do is combine those two and hopefully be a sports orthopedic surgeon and help kids be able to come back and play their sports. I know how valuable that is to so many people so that’s something that I definitely want to do when this is all over.”

While a potential career as a surgeon is many years down the road, Drew will likely only have to wait until his junior year of college to have another opportunity to turn pro in baseball. The reigning Gatorade Nebraska Baseball Player of the Year, who recorded a 0.43 ERA with a state-leading 92 strikeouts in 48 ⅔ innings as a high school senior, figures to significantly improve his draft stock over the next three years with the Huskers.

“He has the work ethic and drive and love for the game and with his frame and his potential, I think there’s definitely a chance he’ll be a big-league pitcher someday,” Elkhorn head baseball coach Kyle McCright said. “With him going to Nebraska, I really see him doing well and having a big impact there.”

The chance to make an impact while wearing the scarlet and cream has been a lifelong dream for Drew, which is why it was worth putting his dream of turning pro on hold. And now when his next opportunity arrives, he’ll not only have one dream fulfilled, he’ll be even more prepared to pursue another.

“I’m super grateful that I was able to go through the process this time around as a high school senior,” Drew said. “Later down the road, I’ll just be more familiar with the whole process. … Hopefully, that’s going to benefit me down the road and if that time comes in a couple of years then I feel like I’m going to put myself in a better spot both personally and as a pitcher, and I think the development that I’m going to have here over the next three years will put me in a better spot than it would’ve been otherwise.”