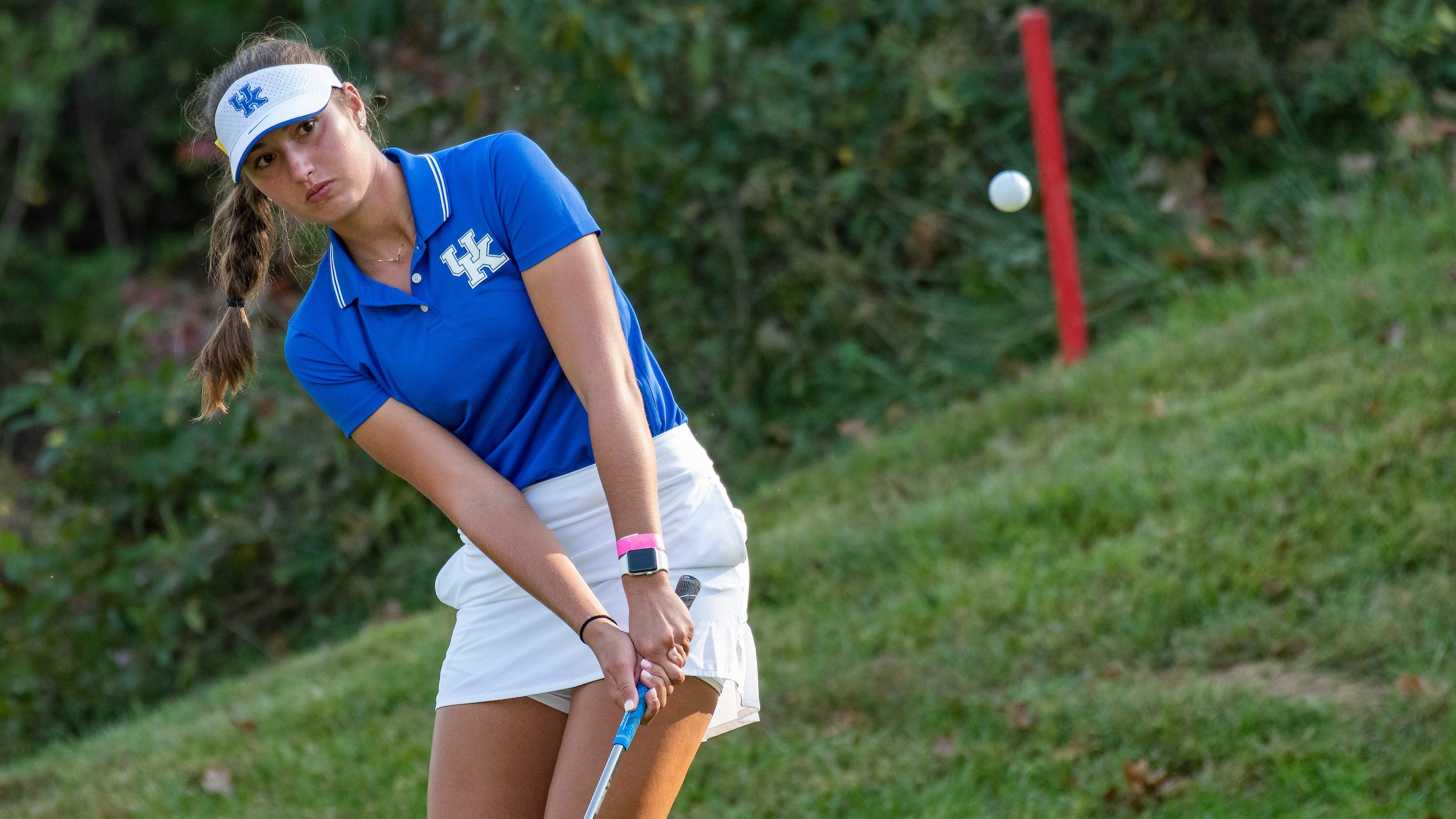 Marissa Wenzler will look to carry her summer momentum into her junior season with the Kentucky Wildcats. (Credit: UK Athletics)

DAYTON, Ohio (BVM) — Marissa Wenzler’s golf talent is no secret. And this summer, she has shown how good of a player she is time and again.

Her dominance was on full display in July while competing in the Western Amateur Championship, a prestigious amateur event that has been held annually since 1901. Wenzler was able to compete in the championship for the first time last summer, giving her an idea of what to expect this year.

“The first time I played in it was last year and that was the first time I had some match play experience,” Wenzler said. “I’ve always loved that event. It’s always run really well and is always a nice event to play in. I didn’t really have many expectations going into this year’s event.”

Going into this year’s Western, Wenzler was coming off a tournament where she didn’t quite play up to her standards. But by the time she got to Park Ridge Country Club in the northwest suburbs of Chicago, things changed.

At the championship, Wenzler began by finishing first in the stroke play portion of the event out of 120 golfers, shooting rounds of 67 and 69 for a two-day score of eight-under.

“I had a good game plan going into the Western,” Wenzler said. “With every day, I just kept going through those motions and the next thing you know, it was Saturday and the final match. It’s really good for the confidence because it’s a long week mentally and physically.”

The championship match would turn out to be a back-and-forth battle. The Kentucky golfer came out hot, going three up through four holes. Hinson-Tolchard would remain tough however, staying within a hole or two throughout the early portion of the back nine. Wenzler would go on to eagle hole 15 for a two-up lead, but Hinson-Tolchard battled back again to win the next two holes.

After tying on the 18th, the two golf standouts went to a playoff. Finally, on the 20th hole of the round, Wenzler drilled a four-foot par putt while Hinson-Tolchard failed to do the same, giving Wenzler the championship.

“I would say so far, that’s definitely one of my biggest wins,” Wenzler mentioned. “Starting out the way I did, I didn’t really think much of it … I kind of kept the same mindset throughout the tournament that you’re all square throughout the whole entire event. Going into extra holes, there were a lot of emotions. I just kept trying to tell myself, ‘this is what you work for, this is why you do what you do.’ If you don’t want to be in this situation, then golf is not for you. This is what it’s all about.

“When she missed that putt on the 20th hole, it was so crazy. All the emotions kind of came out.”

With one of the biggest wins in her career under her belt, Wenzler set her sights on competing in last week’s U.S. Women’s Amateur at Westchester Country Club. Again, Wenzler would make waves in a summer tournament, but had to fight to earn the chance to do so.

During stroke play, Wenzler was part of a 12-golfer playoff to earn one of the final two seeds in the 64-player match play bracket. After a birdie, Wenzler earned the No. 64 seed, and a matchup with top-seeded Wake Forest All-American, Rachel Kuehn.

“I tried to keep the expectations minimal,” Wenzler explained. “The second day of stroke play was a stressful day. The playoff hole was stressful in itself because you don’t really practice being in a 12-person playoff. I had a good game plan going into it, though. Thankfully I was in the last group so I was able to see what everyone was doing. I ended up birdieing and it was a really cool experience.”

A feat just to make the match play portion of the event, Wenzler was not satisfied. Against Kuehn, Wenzler would fall down two early. But birdies at No. 7 and No. 9 helped her rebound, making the match all square at the turn.

After a Kuehn bogey gave Wenzler the lead at hole 11, the Kentucky junior would not look back, winning the match and pulling off an incredible upset.

Today, they each backed it up with wins in the Round of 64, with Wenzler knocking off 🏅 Rachel Kuehn.@Chantel_McCabe | #AmateurAngle pic.twitter.com/yhdbvLOaxF

“I really just wanted to make it into match play,” Wenzler said. “I don’t care what seed I get whether it’s No. 63 or 64, I need to be in it. In an event as big as the U.S. Women’s Am, the seeding doesn’t really matter. Match play is anyone’s game and that’s how I looked at that first match. It was a really cool experience because Rachel is a really great player. To be able to beat her and take that confidence for myself was really important for me.”

Wenzler would lose her next match in the round of 32, but it doesn’t diminish the impressive accomplishments of the summer. What makes them even more special is being able to share it with the ones closest to her, as she had her boyfriend, Conor Stolly, as her caddie at the Western, and her brother, Ryan, as her caddie at the U.S. Amateur.

“It was really awesome,” Marissa noted. “I had Conor at the Western caddying and to have him there with me was nice. He definitely helped keep me calm and helped me to keep a good outlook on everything. Taking that in with Ryan at the Am as well was nice. Anytime I can have Ryan on the bag, it’s always amazing.”

Golf runs in the family, as Ryan is a former collegiate player himself at Wright State who made his PGA Tour debut in 2018 and is currently training for Korn Ferry Tour Q-School. Growing up, Ryan was always someone to look up to for Marissa within the sport when she began playing at 10 years old.

“I didn’t really like it when I first started,” Marissa said about her beginnings in golf. “Watching my brother grow up around golf made me want to do it. He’s definitely had a huge impact, he’s one of my role models. It’s been really cool to see him, how he’s grown and how he’s battled through some of the hard times.”

Although soccer may have been Marissa’s first love, she quickly began getting better and better at golf. Before long, she began her prep career at Centerville High School. By the end of her career with the Elks, Marissa turned into a star, becoming a two-time first team All-Ohio player, as well as the No. 37-ranked golfer in the Class of 2019 according to the American Junior Golf Association (AJGA).

“Everyone wants to do it and state was such a big deal,” Marissa said. “At Centerville, we have all these plaques that show accomplishments at state. I’d go to classes and walk by them every single day. It was always cool to walk by and see those and think I want one of those and I want to make and leave something here at Centerville. To be able to win felt really good and at that point it was one of the most important wins of my life. It was a really cool experience.”

It didn’t take long into her high school career that Marissa realized she could become a college golfer. Although there were a few choices of where she could play, it was Kentucky that saw the golfer’s true potential, and she was set on becoming a Wildcat.

In her freshman season, Marissa made an immediate splash at Kentucky. Over six events played, Marissa earned three top-20 finishes, and averaged an 18-hole score of 73.18, the third best single-season average in program history. However, the season would take a turn in the opposite direction when the remainder of it was canceled due to the pandemic.

“We started strong and came out guns blazing,” Marissa said. “Our team dynamic was awesome. We were out in Arizona for a day and they called us back; that was really hard. Our season was on hold, then it was canceled and there was no national championship. Going through the summer and into the next season, it was really hard.”

However, Marissa would get back on the links during the summer of 2020, and would continue her breakout campaign with wins in the Metropolitan Amateur Championship and Heritage Classic. From there, the 20-year-old also got her first taste of the Western Amateur and U.S. Women’s Amateur championship.

“It was a very long time without competition, so going back into it was more special,” Marissa said. “It was a really good summer and I took a lot from it and appreciated all the experiences I was able to have. That really helped me in taking that step forward and being able to get better.”

Going into this past season, Marissa and her Wildcat teammates were determined to make up for what they lost in 2020, and they certainly did so. The Kentucky women’s golf team would reach the NCAA Championship finals for the first time in 29 years in 2021, with Marissa as a key reason why.

“We didn’t start off as great as we could have to start the year, but in the end, we started to put everything together and it worked out,” the Kentucky golfer added. “It was a really awesome experience for us to be able to compete at nationals.”

Now, with the Wildcats returning plenty of stars, the future remains bright for both Marissa and the team as she looks ahead to her junior season.

“I think anything is possible at this point,” she said.

However, the ultimate goal for Marissa isn’t just what lies ahead this year, but years down the road. She is displaying the kind of path and talent a professional golfer needs, and to get to that level someday would be the ultimate feat.

Resounding US Ryder Cup win could be start of something big
Americans win back Ryder Cup with a record margin of victory
Choi wins at Pebble Beach for 1st PGA Tour Champions victory
Capsules summaries of singles matches at Ryder Cup
Reliance on rookies pays off for U.S. in Ryder Cup blowout
Americans win Ryder Cup in a rout, send Europe a message
Hataoka wins Northwest Arkansas Championship by a stroke
Overmatched Euros ‘need a couple miracles’ to keep Ry...
Choi carries 2-shot lead into final round at Pebble Beach
Johnson is first American since 1979 to go 4-0 in team play
Hataoka gets 2nd ace, shares 1st with Lee in Arkansas event
Capsules from 2nd day at Ryder Cup at Whistling Straits