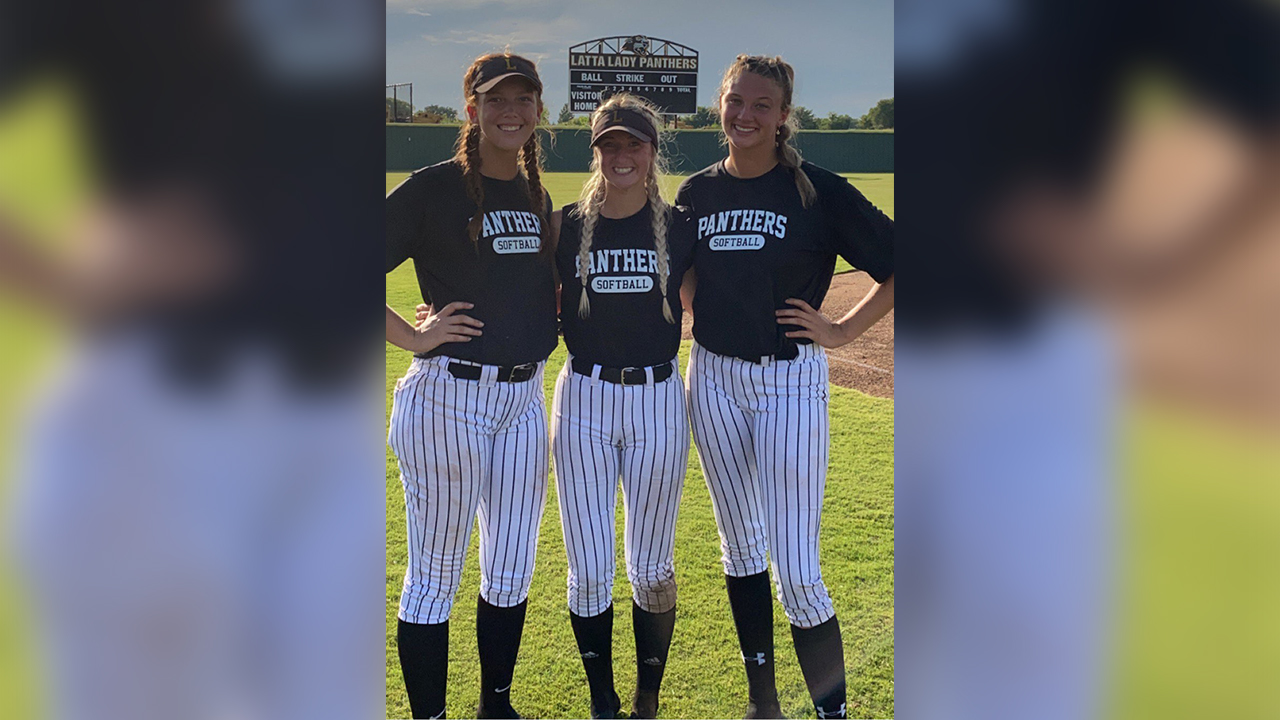 ADA, Okla. (BVM) — Seniors around the country are preparing for their final seasons of high school athletics. Latta High School seniors Jaylee Willis, Triniti Cotanny and Taryn Batterton, are just three of those athletes that will be experiencing their last go-round.

“I went to a [seperate] school as both of them [growing up], so I played travel ball with them growing up,” Batterton said. “They’ve always been my best friends, and we have [great] chemistry. We’re always together.”

“It’s like a sisterhood,” Willis said. “I really enjoy [playing] with them. They’re my best friends.”

Growing up and playing sports together can help develop chemistry, but it can also develop expectations for the team and players like these three.

“In softball, we were always the ones that we’re told we’re going to have to step up,” Willis said. “We’ve always been the ‘chosen’ group for high school.”

The three seniors finally delivered on those expectations last season. The group of three captured their first state title.

“It felt like we reached the top of the mountain,” Willis said. “It was awesome. It’s the best feeling ever, honestly, and we’re looking to do it again this year.”

“We just have to have faith,” Cotanny said. “There [are] so many people that talk down on us. We’re the underdogs in almost [every sport]. We just have to believe we can do it because I know we can.”

Along with having their sights set on two state titles, the three have begun to think about athletics and academics after high school.

In fact, Jaylee and Triniti will be playing together at the University of Science and Arts of Oklahoma (USAO).

“I chose [to go to USAO] because it’s a small school and I’m already used to going to a small school, and I couldn’t imagine myself going to a bigger school like OU (University of Oklahoma),” Cotanny said. “I know I could connect with a whole bunch of people there … It’s awesome [to play alongside Jaylee]. [Her and I] have been friends for a very long time. That helps out on the court, and we work so well together … “[I’m] playing softball [with Jaylee], but I’m trying to [join] the basketball [team] too.”

“I’m really excited to [continue] to play with [Triniti],” Willis said. “I’ve been playing with her my whole life. We have a really great friendship and were both really good together on the field and on the court.”

After a lot of consideration I am very excited and extremely blessed to announce that I have verbally committed to play softball and basketball at USAO!💚💛 Go Drovers!! @CoachDM15 @jadyn_wallis pic.twitter.com/tu1kZ7AlM2

I am super excited and blessed to announce that I have committed to play softball at USAO!! I’m so grateful for this opportunity, and can’t wait to be drover! 💚 pic.twitter.com/9X5S9p9zIo

Batterton may be joining her teammates at USAO, but she is continuing to mull her offers that she has received.

Wherever the road leads her, she is bound to have a successful tenure. But if she were to team up with Jaylee and Triniti at USAO, it could be a special trio.

Not only have the three had each other to lean on while they compete for state titles, but they’ve had incredible support systems behind them.

“My parents have been there through everything in my sports career,” Willis said. “[They’ve put in so much time] and have been extremely supportive. They’ve been my No. 1 supporters through it all.”

“[I’ve been playing] for Coach Rogers for almost six years now,” Cotanny said. “She has taught me so much. How to be a young lady, how to act right [and] how to treat other people right. She’s amazing. I know I can talk to her about anything. Same [goes for] Coach Plunk, he taught us never to never give up and always hustle, he’s amazing [too].”

“Having Coach Plunk and Coach Rogers as coaches in high school has really helped me develop [as a player and a person],” Batterton said. “[They help] make us grow better as people, not just athletes.”

It truly has been a special four years for the players and the coaches, especially for this trio. They’ll look to go out on top, but no matter what they accomplish they should be remembered as three of the best athletes to come through Latta High School.