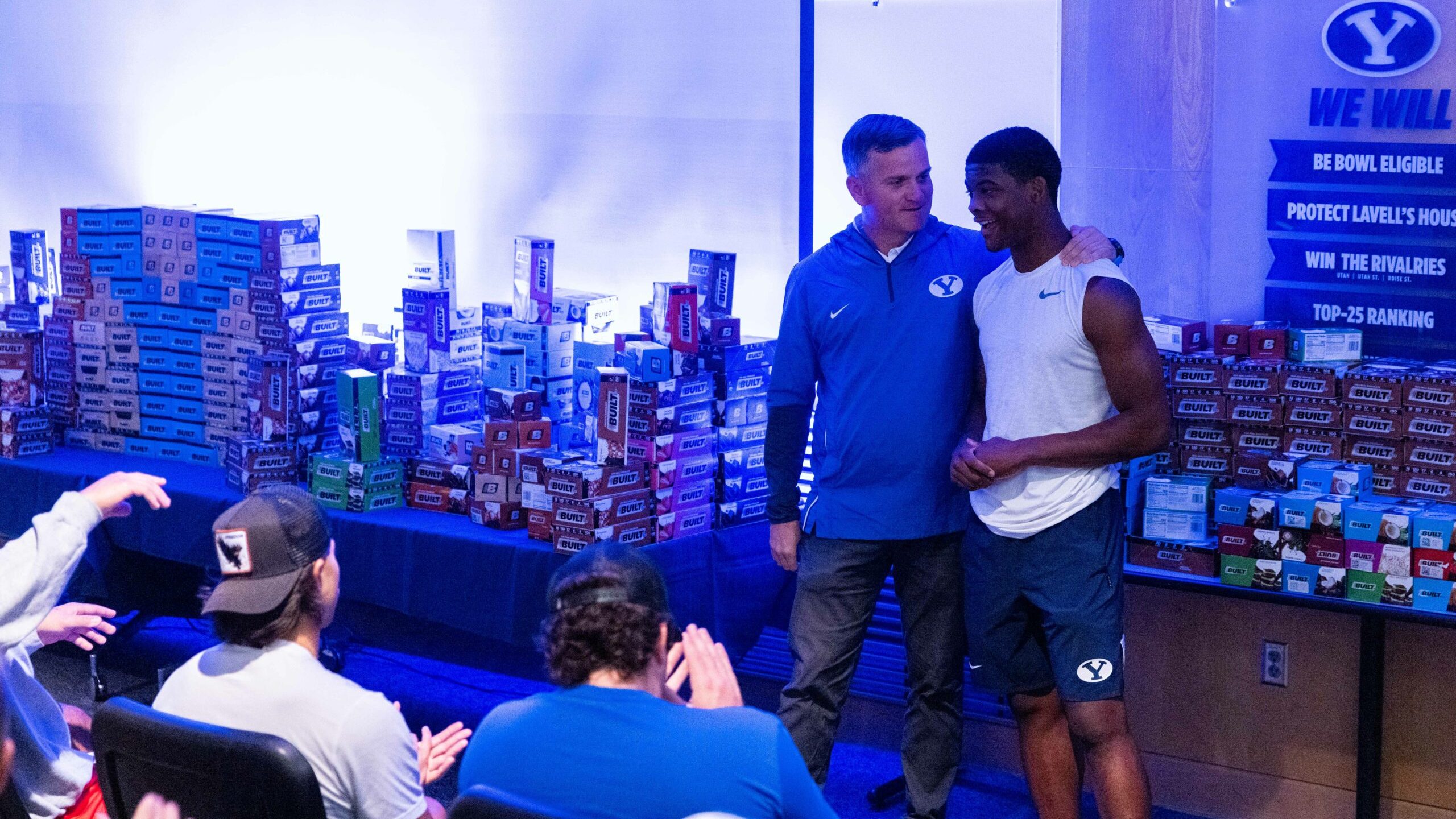 Quarterback Nick Billoups is one of 36 BYU walk-ons to enter into an agreement with Built Brands, LLC which pays their tuition. (Courtesy: Jaren Wilkey/BYU Photo)

PROVO, Utah (BVM) – The landscape of collegiate athletics is evolving before our very eyes. Just hours after the NCAA adopted a long-awaited policy change that allows college athletes to have the opportunity to benefit from their name, image and likeness beginning on July 1, the first deals were struck.

From Fresno State basketball twin sisters Hanna and Haley Cavinder becoming spokeswomen for Boost Mobile to Alabama quarterback Bryce Young raking in nearly $1 million in deals before ever starting a game for the Crimson Tide, high-profile collegiate athletes have finally begun cashing in on their NIL rights.

But even the walk-ons at one Division I football program have been able to reap the benefits of this new reality. Nick Billoups is a walk-on quarterback at BYU who knows exactly how his experience differs from that of a scholarship player.

“Being a walk-on is pretty hard,” Billoups said. “You’re trying to get on the field at whatever position you are, kind of knowing that you’re a backup or last option. Sometimes it’s not what you want to do, because of course you want to play, but it’s kind of just all a part of the process of being a Division I football player.

“It’s for sure a hard lifestyle.”

BYU Athletics and its corporate partner Built Brands, LLC – producer of protein and energy products — recently made the life of Billoups and his teammates much easier in the form of a groundbreaking NIL deal. A total of 123 football players, including 36 walk-ons, have entered into an agreement directly with Built in which players will wear Built branding on their practice helmets and participate in experiential events.

“From the beginning of the NIL discussion, my hope was that changes to NCAA rules and regulations would provide a pathway forward for all players to benefit more fully from their name, image, and likeness, especially walk-ons who sacrifice so much to make our program great,” BYU head coach Kalani Sitake said in a press release.

“When Nick Greer (Built co-founder) called to tell me that Built was committed to entering into NIL deals which would pay our walk-ons enough money to cover their tuition for the full academic year, I could not hold back my emotions. I love these boys, and I am overwhelmed with gratitude to be partnering with a company that is equally committed to assisting BYU football in building a culture of love and learning while enhancing the experience for all players.”

The day was perhaps most special to Billoups who was introduced by Greer as Built’s employee No. 1.

Just moments before he was told that he would have his tuition paid for and was swarmed by his Cougar teammates, Billoups said he was nervous to be called down in front of the team. Having just recently joined the program after entering the NCAA Transfer Portal, he still felt like the new guy.

“He (Greer) called me up and I was like ‘Jeez, he’s probably just picking on me. Why me? I’m the new guy’,” Billoups said. “Once he told me he wanted to make me employee No. 1 and wanted to pay for my tuition, my heart dropped; I didn’t expect that at all.

“All my teammates were cheering for me and it was just an unreal feeling. It was a super emotional day for everybody, my family and even all the other walk-ons. It takes a lot off my family and I really appreciate what they did for me.”

Beyond humbled, a lot of soul searching last two years, a lot of unexplained lows, Thank God for sending the right people around me @Tritonfootball for never stop speaking of me, @kalanifsitake Coach, my family loves you, I’m speechless @CoachRoderick You believed in me, Let’s Go https://t.co/s5y0PnfNNt

It was certainly a high point for Billoups after a couple of years filled with “unexplained lows.”

The San Clemente, California native compiled 1,486 total yards and 24 touchdowns as a senior at San Clemente High School, but a postseason run was cut short after the Tritons were removed from the CIF-SS playoffs. Billoups, however, was able to play in the Orange County North South All-Star game in 2020 where he earned MVP honors for the South squad.

But what Billoups’ impressive high school career didn’t net him were any Division I scholarship offers.

“That was just the only upsetting part,” Billoups said. “I was balling in high school and having a great time, but I just didn’t have those college offers that I saw some of my peers had; it was pretty depressing.”

“I can spin the ball as good as these guys, I go to all the camps and I bring something else; I bring my feet, I can run. So I was like if anybody should be getting offers or looked at, it should be me.”

Billoups landed as a walk-on quarterback at the University of Utah for the 2020 season, but the Utes’ coaching staff deemed his skillset to be more useful at another position. By the time spring football rolled around, Billoups was one of 10 safeties on Utah’s roster.

“They (Utah staff) told me ‘We want you to go to free safety; we think you’d be a good choice’,” Billoups said. “That was another low for me because that was almost heartbreaking to put so much time and money into (playing) quarterback and then to be told they think you’ll be better somewhere else.”

Billoups entered the transfer portal in May at the conclusion of Utah’s spring ball and soon after felt wanted by BYU and offensive coordinator/QBs coach Aaron Roderick. BYU signee Preston Rex was a high school teammate of Billoups and San Clemente is an area Roderick has recruited extensively during his time with the Cougars.

Exactly one week into fall camp in Provo, Billoups found out he would have his tuition paid for, something that appeared to be a long shot just a year or two prior.

None of this would’ve been possible without NCAA changes to its NIL policy. The future of collegiate sports is now here, and Billoups is here for it.

“I think it’s great because these schools make so much money off of our names, the football teams and all the different sports,” Billoups said. “We’re generating all the money so we should get a part of it. It’s pretty dope.”