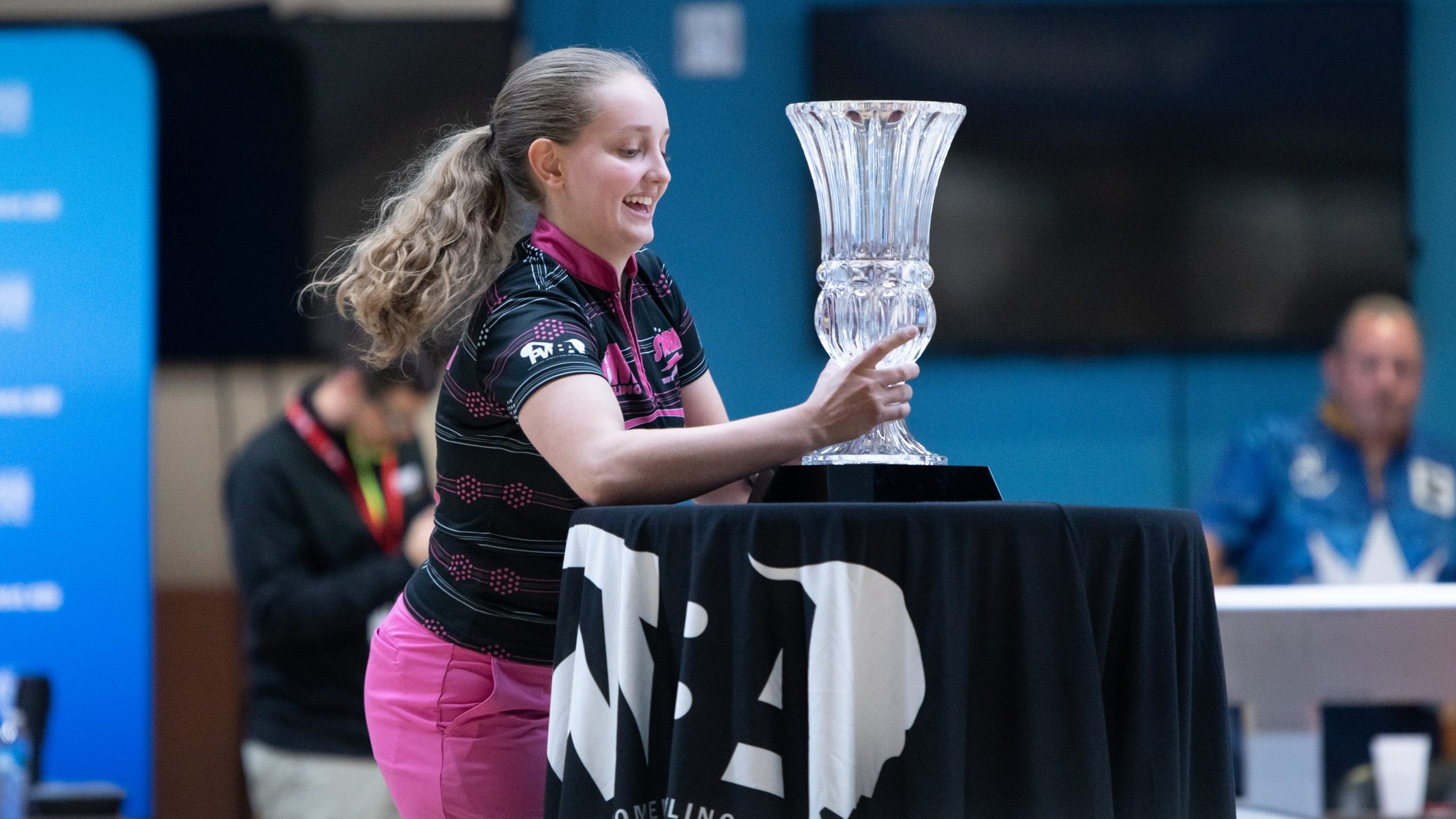 STOW, Ohio (BVM) — The name Jillian Martin is quickly becoming well known in the bowling world, and it may be one people remember for many years to come.

At 5 years old, Martin already knew she may have a future in bowling. Trying out gymnastics and dance as well, nothing could compete with her talent on the lanes.

“As I started getting older, I just kind of fell in love with bowling and it ended up winning over my heart of the three,” Martin said. “There’s an endless amount of things to learn and I think that is what has always made me love it so much.”

Like many typical high school students, Martin also makes time for extracurriculars whether it is band or national honors society. But the work she continues to put in when it comes to her top sport is beginning to stand apart.

Growing up, Martin was able to learn the game from her uncle and alongside her father while competing in an adult-junior league with him.

“I learned a lot of stuff from my uncle and he really helped me with learning the basics and setting a strong foundation,” Martin said. “As I got older, my dad really became a big part of the picture and we were really trying to learn bowling together. Both my parents have been super supportive of my journey which I’m endlessly thankful for.”

Whether it’s her footwork, strength, hand positioning or rev rate, Martin’s top attributes in the sport helped her emerge throughout her youth. What also came was confidence thanks to the words of a famous professional bowler.

“When I was 14, Jason Belmonte actually said that one day I would be the greatest female [bowler] in the world so I’ve kind of always looked up to him,” Martin said.

Belmonte had good reason to make that claim based on Martin’s impressive junior career. Starting out with local youth tournaments, Martin quickly rose to the national ranks. There, she has won 11 junior championships including another in 2021.

Perhaps one of her top accomplishments prior to this summer was also earning a spot on Junior Team USA in 2019 at just 14 years old. To do so, she impressively led all competitors in the U20 division at the Junior Gold Championships.

“That was one of my big goals that I accomplished,” Martin noted. “I decided to go into the U20 division to give myself a chance to become the youngest to ever make Junior Team USA and I actually did that. The support of the coaches and everybody on Junior Team USA has been incredibly helpful for my game.”

Around the same time, Martin was coming off her first and only season of bowling at Stow-Munroe Falls High School. As one could imagine, she found herself as a champion once again that year while competing at state.

“It was super awesome,” she said. “I gave it a shot and it was a super fun year. I enjoyed competing for my high school and I had never played in a state championship.”

Although she would like to still be competing at Stow-Munroe Falls, Martin is a rare athlete who is getting opportunities to compete at a pro level in her sport as just a high schooler. In 2019, Martin competed in her first Professional Women’s Bowling Association (PWBA) event in the U.S. Women’s Open. Her performance there continued to grow her confidence.

“I performed a lot better than I thought I would perform and I think for me that was the point where I felt like I could really compete against these ladies out on tour,” Martin added.

With the 2020 PWBA season canceled, Martin’s next professional opportunity came last January at the ITRC Classic. There, she once again dazzled with her performance, making it through several rounds of tournament play to eventually face off and win against hall of fame bowler Liz Johnson, as well as Dasha Kovalova.

From there, it was on to the final match against Bryanna Cote. Martin would bowl an impressive 238, but would unfortunately fall short of becoming the youngest PWBA winner ever as Cote beat her by just six pins.

“I got to the championship match and finished second,” Martin said. “It stung to be that close and still lose, especially knowing that if I won that, I would be the youngest to ever win the title. But I think that led up to what happened in early August.”

Just seven months later, Martin had her third crack at a PWBA event. This time, it was the PWBA BowlTV Classic held in Arlington, Texas. Once again, the high school senior would make it all the way to the championship match, and this time, the results would be different.

Doing battle with England’s Verity Crawley, Martin came out on top 221-188, winning the $10,000 prize of the tournament, and also becoming the youngest female to ever win a PWBA event — breaking Wendy Macpherson’s record set in the 1986 U.S. Women’s Open.

Martin, the top seed for the finals, defeated England's Verity Crawley, 221-188, in the title match of the 2021 PWBA BowlTV Classic. pic.twitter.com/wBnTLhfFec

“After my finish in January, I definitely had the confidence to go out there and win,” Martin explained. “I had that experience in that championship match before and I think that really helped me. I just wanted to control what I could control and stay in the moment, and I ended up winning.

“There were a lot of nerves going into that, but it was just a really cool accomplishment and something I’ve been looking to do for a while. It was super cool and super awesome to have my dad behind me and one of my coaches and one of my friends.”

The win has garnered plenty of national exposure for Martin, perhaps highlighted by a recent appearance on the TV show, “FOX and Friends” on National Bowling Day. Meanwhile, her impressive win is also something young female bowlers, and young athletes as a whole, have begun to look up to for inspiration.

“I’ve gotten messages from younger people and girls in the sport,” Martin said. “It’s been awesome to be that role model. I never fully expected myself to be in the position but I’m super grateful to be in that position and be an ambassador for the sport with what I’ve done. I hope people see it and know they can achieve whatever they want to do. I think it’s awesome for the sport of bowling too.”

Now, Martin will continue to bowl youth tournaments through the fall, and prepare for her next PWBA event in January. Meanwhile, she is also closing in on making her final college decision. Currently, her options are down to Nebraska, Wichita State, McKendree, Vanderbilt and North Carolina A&T.

Wherever she ends up, Martin’s goal will be to win a national title. But with a professional win already under her belt, the star bowler’s ceiling is sky high. After college, Martin plans to immediately become a professional bowler, where she will have a chance to live up to her high expectations.

By the time all is said and done, Martin hopes to have racked up several more PWBA wins, and with the trajectory she is already on, just maybe leave the sport as one of the greatest of all time.

“Right after college I do plan to join the pro tour,” Martin said. “It will be super cool to be at the pinnacle of our sport, I just think that’ll be a great experience. We’ll see how many more titles I’ll win, I think it will be fun. We’ll see what legacy I leave behind. At this point, I’m not sure, but it would be great to be possibly one of the greatest ever.”