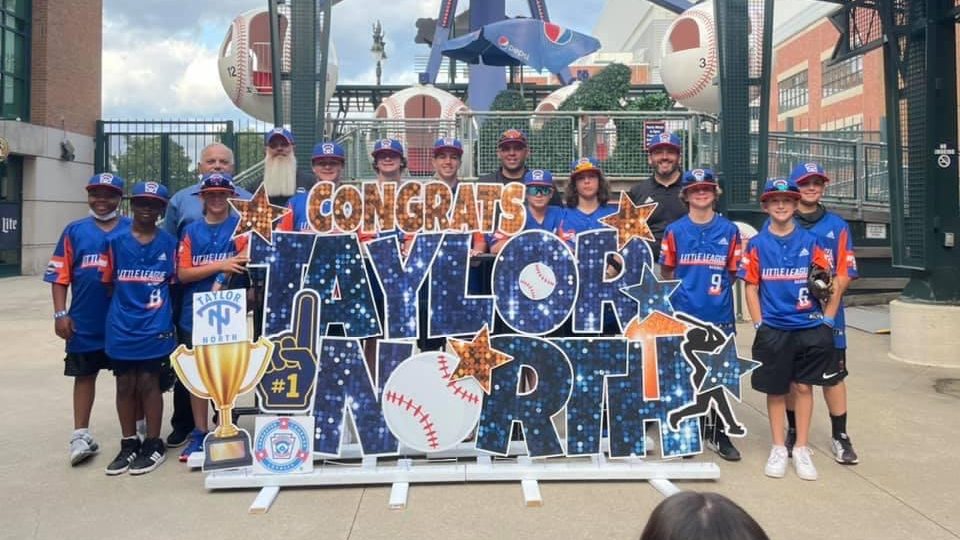 TAYLOR, Mich. (BVM) — The Taylor North Little League team has not always been seen as the top dog. Even after getting to the Little League World Series in Williamsport, Pennsylvania, many still didn’t envision Michigan having its first little league champion since 1959.

But Taylor North defied the odds, and after a 5-2 win over Ohio, they were crowned champions. It’s been a long journey to get to this point for Taylor North, but also a dominant one at that.

After recently combining the North Central, Northwest and Northeast teams into one, Taylor North had a lot of potential early in the season. That was quickly realized by Coach Thorning — a part of the Taylor program for the past 13 years.

“Without a doubt, it’s a good group of kids,” Rick said. “Six of the kids were on our travel team and in our little league organization and the other five kids I’ve known throughout the past couple years. Once we put the names down on paper, that’s when Coach Guido and I knew we really didn’t have a hole in this lineup.”

Taylor North proved they indeed had an exceptional lineup, but a dominant group of pitchers as well. Within the state of Michigan, the team cruised to the title game. Despite a tough championship contest with Bay City where the team had to battle back from a 2-0 deficit, Taylor North came out victorious again, sending them to regional play.

From there, Taylor North did battle with several Midwest foes. Blowout wins over Wisconsin, Illinois, Indiana and Ohio would help the team to the top seed coming out of its region, and punched a ticket to the Little League World Series.

“Bay City was one of our toughest games,” Rick said. “But once we got to the regional tournament, we knew that we belonged there with these kids. Reality started setting in that if we played good baseball, we would make it out of the region for sure.”

The Michigan team was happy to be in Williamsport. But once there, the group put its focus on the task at hand.

“You’re happy to be there, you’re excited no matter what,” Rick added. “But Coach Guido and myself started watching games and looking at stuff and knew our team was built for this and built for a run like this.”

The run began with an 8-0 win over Florida. At that point, Taylor North had outscored their opponents by an astounding 170-10 margin through the summer. But as they headed deeper in the tournament, things did get tougher.

In a contest against Texas, Taylor North was in a rare hole, getting down 5-0 early. However, a Cameron Thorning grand slam would get them right back in the game, and after a couple more runs and some dominant pitching from Ulin, Michigan survived to keep its perfect season going.

Next up, though, was one of the toughest teams in the tournament in Hawaii. And for the first time all season, the squad from Michigan had no answers, losing 2-0.

“We only got one hit and that was the first time somebody has really shut us down,” Rick said about the Hawaii game. “However, during that game we barreled the ball up quite a bit and even had a home run that was robbed. I felt pretty confident and happy after that game even though we lost.”

With their backs up against the wall for the first time this summer, the kids from Michigan responded with a dominant win in their next game over Texas, scoring a tournament-high 15 runs in the process. That would set up a rematch in the Hank Aaron bracket final against Hawaii. This time, things would go much differently, in large part thanks to Rick’s son, Cameron.

A home run in the top of the first by Cameron set the tone, and Michigan never looked back. The youngster was also dominant on the mound throughout the contest, and threw a combined two-hitter along with Furkas.

“You knew it was going to be a tight game,” Rick said. “My son Cameron hasn’t thrown that much in the past three months, but he was ready to go. When he’s healthy and he’s on, he’s been untouchable for us the entire year. To score two runs on his home run in the first inning, I knew that very well could be all we needed.”

The 2-1 win set up a championship game which perhaps surprisingly was also a rematch, this time coming against the team from Hamilton, Ohio. The regional foes would play a much closer contest this time around, but the results remained the same.

In the first inning, Taylor North jumped out to a quick 3-0 advantage. Despite bases-loaded threats from Ohio twice in the early innings, ace pitcher VanBelle managed to get out of the jams, and gave way to Ulin to finish things off.

Tacking on a couple more runs in the fifth thanks to a clutch hit by Surma, Taylor North could taste victory, and would close out what ended up being a 5-2 win.

“Ohio was a team that deserved to be where they were, they played well,” Rick said. “That game in itself was big, we got out of a couple jams but our team was built to get through stuff like that. Our kids stayed confident, calm and relaxed, and they pulled it off.

“That game was definitely a different atmosphere. When you’re playing for the Little League World Series championship, as a baseball guy, you know what that means. The ground is buzzing and you can feel the noise. There weren’t as many people there as previous years, but it still felt like you were playing in front of 30,000 people with the support of our fans. For us to come out on top of that, to get that last out and know that we did it, it turned into a sigh of relief that we just accomplished what every 11 or 12-year-old kid in the world wants to accomplish. There’s really no feeling like that and it’s hard to put into words. It’s a phenomenal feeling to have.”

Taylor North goes down as the first little league team from Michigan to win the world series since Hamtramck did it back in 1959. It takes a special group of kids to win a title, and that’s exactly what this squad had.

“It’s building team chemistry,” Rick said. “With these kids, you have 11 different personalities which is phenomenal and you have to understand that they’re not 17 or 18-year-old kids. We got pretty close with these kids and got to know them on a daily basis; that’s huge. When they were on the ball field, they mended so well together and that was really a big key to our success.”

Each of Taylor North’s three coaches had a son playing on the team. For Rick, seeing his son Cameron — who finished the tournament with three home runs and nine RBIs — have so many special moments in the world series was all he could ask for.

“I’m one of those coaches who doesn’t talk about his son prior to stuff,” Rick said. “I tell people he’s different because he does have something different about him. He’s a hard worker and sports are his life right now. When he was 4 years old, you could just tell the way the kid threw a baseball, caught a baseball, could swing the bat … you just kind of knew.

“It was very humbling to see the things people say about him. During the game I have my coaching shoes on, but after the game I put my dad shoes on and get to watch my son on TV and be proud of what he accomplished.”

When Cameron was 4, Rick predicted he would lead Taylor to the Little League World Series. He was right, and the sigh of relief that he and the team felt after the win has turned into a full-fledged celebration.

Back home, the Taylor North boys received a victory parade through the city. Days later, they had an opportunity to meet the Detroit Tigers, including MLB legend Miguel Cabrera. Sunday, the squad will also attend and be honored at the Detroit Lions’ season opener against the 49ers.

“It’s been phenomenal with the support people have been showing us,” Rick said. “There’s so many different things we are doing and it’s just amazing people are reaching out to us. We’ve touched so many people in the state of Michigan that people know who these kids are. It’s overwhelming, but in a good way.”

Rick realizes the aura surrounding this title won’t last forever. But what will is the legacy this team has left.

“Even though these kids are 12, there’s a lot of 6, 7, 8-year-old kids who look up to these guys almost like they’re professional athletes,” Rick mentioned. “We’re hoping this situation brings more people back to little league.”

While the team will always be remembered, soon it will be time to look towards the future, and it remains bright not only for the current squad, but also the Taylor North program as a whole.

“Our goal with all of this is to reach out to the kids in our little league and show them that this is possible,” Rick concluded. “We hope this opened a lot of people’s eyes. That’s our goal in all of this is to get these kids back. This team has a track record so I think the expectations will be there and the support will be there … I think that’s the best outcome that we could ask for.”