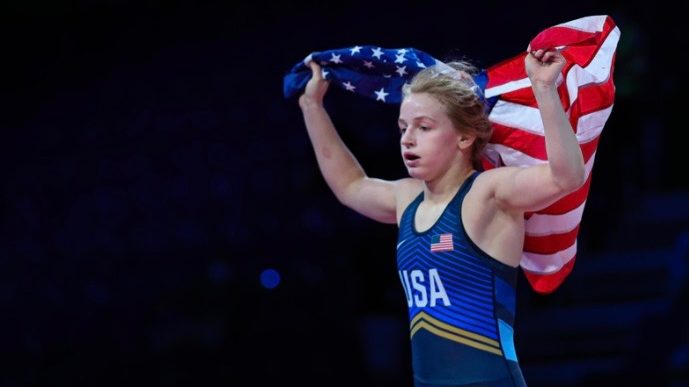 MINNEAPOLIS (BVM) —  After winning one gold, one silver and two bronze medals at the 2020 Tokyo Olympics, Team USA women’s wrestling doubled down on their impressive summer by making history at the 2021 Junior World Championships in Ufa, Russia.

It was in Russia that Team USA for the first time ever had multiple champions in women’s freestyle with Amit Elor, Kylie Welker and Emily Shilson all winning gold medals in their respective weight classes.

“Team USA has had a great summer in womens wrestling,” Shilson said. “It’s so cool to be a part of this team that’s had the summer that we had”

Shilson came into the tournament with high expectations after making it to the Team USA Olympic Trials back in the spring. She missed the cut for Tokyo, but the whole experience was extremely positive and Shilson said it prepared her for Russia.

“I went into the tournament feeling really confident, but it was also my first time ever wrestling at junior worlds so I knew it was going to be a little different than cadets or U23s,” Shilson said. “I knew that we had a really solid team and I felt great leading up to the tournament.”

Shilson had competed against most of her competition prior to worlds and everyone she faced in the tournament had won a medal at worlds previously, so the Maple Grove, Minnesota native had her work cut out for her when took on her first opponent, Natallia Varakina of Belarus.

Shilson won 6-3 to move on to the next round where she overcame a 4-0 deficit to beat Viktoriia Aleksandrova of Russia 10-7. After that, Shilson did not concede a single point in her last two matches, winning both 10-0 against Simran Simran of India in the semifinals and Enkhzul Batbaatar of Mongolia in the championship.

“To be part of the first-ever junior team that won worlds it’s really cool,” Shilson said. “That’s something that is never going to go away and it’s just awesome to be a part of history.”

Her success in Russia is just the most recent accolade in her short career. The 20-year-old has a resume that includes becoming a 2018 UWW Cadet world champion, a 2017 UWW Cadet world silver medalist, a 2018 Youth Olympic Games champion, the first American to do so, and a five-time USA wrestling world team member.

Shilson then made the decision to stay close to home and go to college at Augsburg University in Minneapolis where she has gone undefeated during her two seasons with the Auggies and has won two National Collegiate Women’s Wrestling Championship (NCWWC) titles.

However, this success did not begin overnight and has been in the works since Shilson was 5 years old watching her brother wrestle.

“I would always go to practices with my brother and I’d always be sitting on the side,” Shilson said. “I didn’t want to do that anymore, I wanted to get in on the action so I asked my parents if I could wrestle and they said I could as long as I always gave 100% and I never looked back from there.”

Giving 100% was never an issue for Shilson. and in fact, it is the reason she loves wrestling so much. The physical and mental demands that it imposes on those who try to excel at it are what keep her coming back each day to train. Shilson says one of her coaches at Pinnacle Wrestling School, Brandon Paulson, an Olympic silver medalist himself, has a motto, ‘Love the fight.’

And from an early age, Shilson wasn’t just training for the fun of it, she also had some big-time goals that she is still working toward to this day.

“When I was first starting wrestling my parents told me what the Olympics were and I said I wanted to do that but I didn’t really understand what that meant,” Shilson said. “Then I think as I got older I started realizing what it would take to get to that point and I realized that I wanted to and I could do whatever I wanted in the sport.”

She got close this year and although she didn’t make it, she is confident that in three years she’ll be more than ready to take the next step in her career.

“I’m not really close to peaking yet in my career,” Shilson said. “I think as we get closer to 2024 I’ll be closer to that point and I know I’m only getting better.”

Until then, she will continue to train with her dad and brother as she focuses on her next big tournament which will be the UWW U23 World Championships in Belgrade, Serbia in early November.

Once she is done with that, Shilson will switch her focus back to her collegiate career and helping Augsburg win a national championship.

“I want to help the team win a national title. … I think we’re going to be the team to beat,” Shilson said.

“It’s just so cool to be a part of this movement,” Shilson said. “Now with Minnesota high school girls wrestling being sanctioned it’s only going to explode more from here.”

All the more reason to show those girls that will someday be following in Shilson’s footsteps how to “love the fight.”