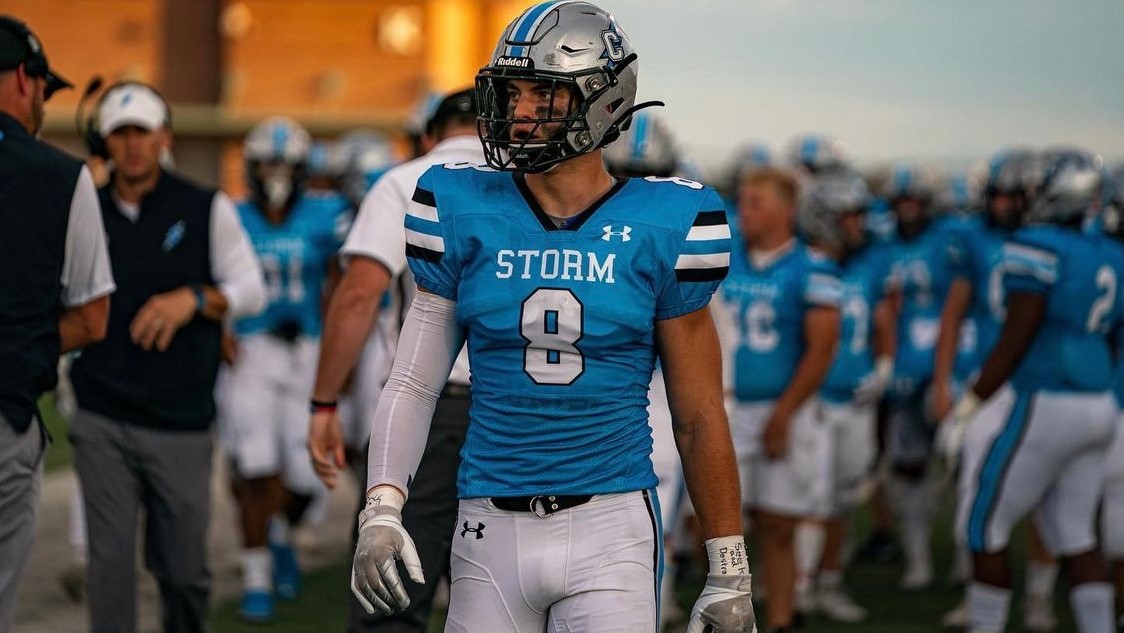 Sophomore linebacker Stratton Shufelt quickly burst onto the scene as a Cleveland High School freshman this past spring when he was named first team all-state. (Credit: Varsity Sportraits)

RIO RANCHO, N.M. (BVM) — In one way, the 2020 high school football season could be remembered as a year of lost opportunity for the Cleveland Storm. They didn’t get the chance to win back-to-back Class 6A state championships after their normal fall season was postponed due to the COVID-19 pandemic and they were forced to settle for playing an abbreviated four-game schedule with no playoffs in the spring.

But in another way, the 2020 season could be remembered as one in which the Storm made the most of the opportunity they were given by dominating all four of their games while many players gained valuable experience they wouldn’t have had heading into this season if the New Mexico Activities Association (NMAA) had canceled the 2020 season altogether. One of those players who certainly made the most of his opportunity is Stratton Shufelt.

The 6-foot-2, 210-pound linebacker earned a starting position in his first year of high school football and opened eyes all across New Mexico while becoming an all-state first team selection — a rare feat for a freshman. He also earned his first Division I scholarship offer from the University of New Mexico.

“A lot of times, kids come to us and we have to teach them how to practice, how to be physical, how to grind, so to speak,” Cleveland head coach Heath Ridenour said. “Stratton came to us as a freshman knowing all of those things, which was such an advantage.”

It shouldn’t come as much of a surprise that Shufelt was ready for his chance. Not only did he already have the skills and build of a varsity player, but he also comes from a football family. He’s the son of Pete Shufelt, a linebacker and special teams captain for the New York Giants in the mid-1990s.

“Coming into my eighth-grade year, I told my dad, ‘I want to play on varsity,’ Stratton said. “I didn’t want to just wear the jersey, I wanted to play. I worked and worked and I got my chance and I wasn’t going to let those seniors down during the COVID season.”

Heading into his sophomore year, Stratton was already considered to be the best player in the state. Such a distinction might seem like a lot of pressure to put on a player who only had four varsity games under his belt prior to this season, but Stratton takes it in stride.

“You’ve just got to block that out and play for your team,” Stratton said. “I’m there to win games and making a name for myself will come along the way. (I just have to) to stay focused on the game and play hard for the guys next to me and to win a state championship is the main goal I have. You’ve just got to be able to take that pressure and push it to the side.”

Another state championship is a realistic goal for the Storm. They’re off to a 5-0 start and ranked as the top team in the state. As for Stratton as an individual, meanwhile, he’s just beginning to draw the level of attention that will lead to many more Division I offers, some of which will likely be coming from Power 5 programs.

“He’s just too talented, early, early in his high school career to not get those opportunities,” Ridenour said. “He’s incredibly strong, incredibly explosive. I think his football IQ really puts him in position to win a lot of plays. … He’s a special talent. I think the sky’s the limit for that guy.”

With two and a half years of high school football left, Stratton still has plenty to prove, but he’s not tempering his own expectations. He’s driven to play college football at the highest level and the ultimate dream of following in his father’s footsteps and reaching the pros is by no means beyond the realm of possibility.