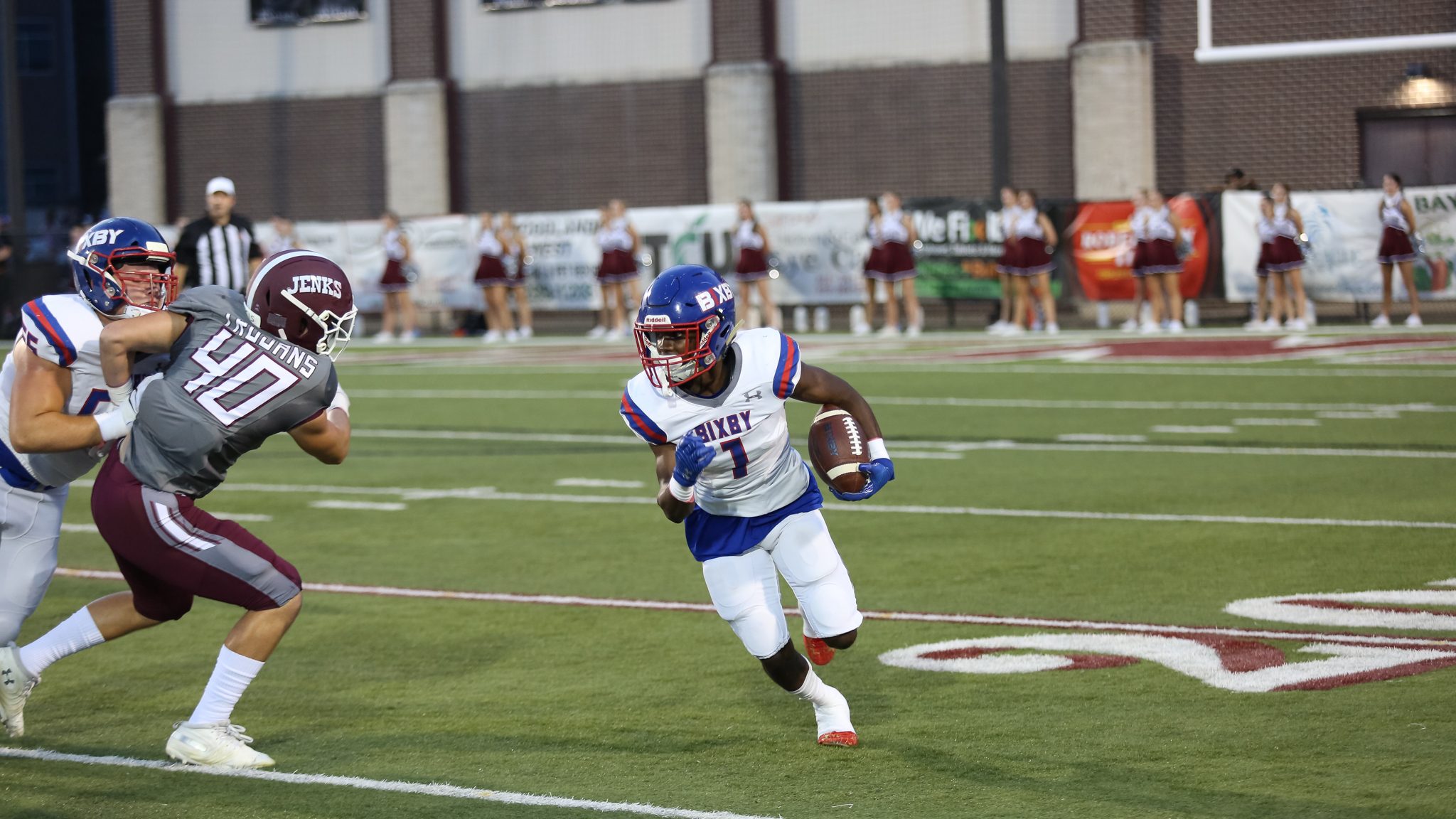 Braylin Presley (No. 1) will be joining his brother at Oklahoma State in 2022. (Photo Credit: Gregg Shipman Photos)

BIXBY, Okla. (BVM) — Braylin Presley has had a great career at Bixby High School. In his final year with the Spartans, Presley is ready to go out on top.

As a freshman in 2018, Presley played in 13 games for Spartans, but compared to his next two seasons, it would be a small role for him. According to MaxPreps, he carried the ball 99 times for 743 yards and a total of 12 TDs.

“Braylin is super explosive,” Bixby head football coach Loren Montgomery said. “You get the feeling that each one of his runs could go the distance.”

Presley and the Spartans captured a state title at the end of the 2018-19 season and they were poised to win more.

“Getting over the hump was a huge step for this team,” Montgomery said. “Football has always been a big part of Bixby; it’s great to see this team at the next level.”

“I love it [playing at Bixby],” Presley said. “Building the name of Bixby, and helping it become the national program it is today is one thing that is special to me.”

Over the next two seasons, Presley would help the Spartans capture two more state titles and continue Bixby’s winning streak. In those two seasons, Presley rushed for 3,130 yards and 46 TDs. Braylin did this alongside his brother Brennan who now plays at Oklahoma State for Coach Mike Gundy.

When both took to the gridiron in Bixby, it was nearly impossible to stop them. Braylin and Brennan scored 130 touchdowns together. That’s roughly 22 points per game.

“Although both are explosive, [they have] very different skill sets.  Braylin is more elusive and explosive,” Montgomery said. “Brennan is smoother and can really play multiple positions.”

For Braylin, football came at an early age. He started playing football when he was in kindergarten and from then on, he kept on improving his craft.

“People started to notice I was getting better each year,” Braylin said. “It was [a sport] I always stuck with [and] I always enjoyed it. I continue to love it more every day and you really can enjoy yourself when you’re out there.”

And that improvement has helped him garner interest from top D1 programs. Although there was plenty of interest, Braylin made his decision to join the Oklahoma State Cowboys earlier this year.

“The atmosphere [and] the coaches were the main [reason for heading to Stillwater],” Braylin said. “I trusted what coach Dunn and Coach Gundy were saying.”

“I think it will be special,” Montgomery said. “They are a very close family, and Braylin and Brennan are very competitive with one another. I would also think that it will be really exciting for their parents to watch the two play together.”

But that is something that Braylin isn’t focusing on right now. Currently, he is trying to help the Spartans win their fourth straight state championship. With four games played, Braylin is doing just that in his senior season with 520 rushing yards and six TDs in only four games.

When the season ends, Braylin hopes to hoist his fourth gold ball in his career. And with the way this season is going, it looks like that could happen.

“[I want to win] another championship first and foremost,” Braylin said. “Regardless of how many rushing yards or receiving yards I get, the goal for me and this team is to win another state championship and to go undefeated.”