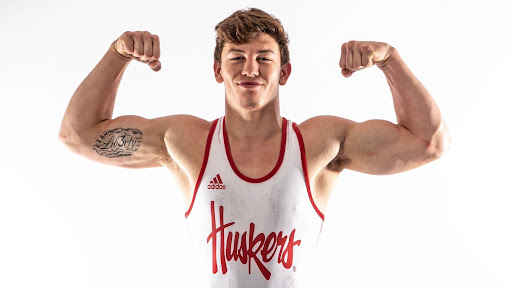 Harley Andrews will continue wrestling for the Cornhuskers in 2022. (Courtesy: @dripH20/Twitter)

TUTTLE, Okla. (BVM) — The Tuttle wrestling program has been the best in the state of Oklahoma for 12 years now. A lot of its athletes have gone on to the college level to continue their athletic and academic careers, and Nebraska commit Harley Andrews is planning to do the same.

Since he was younger, Andrews has always wrestled. But after his first year, he nearly quit the sport.

“I actually quit [wrestling] one year because I didn’t like it,” Andrews said. I didn’t [perform well] my first year and I played soccer. I was way too big for that, so I went back to wrestling.”

Eventually, he would find his love and passion for the sport, but along the way, he also fell in love with another sport: football. He started playing football around the fourth or fifth grade and he has enjoyed playing both sports in Tuttle.

Harley didn’t always live in Tuttle though. He was born and raised almost 45 minutes away in Hinton, Oklahoma. But the community of Tuttle embraced him as one of their own.

“I wasn’t a kid who grew up in Tuttle… I’ll always go back to Hinton,” Andrews said. “But Tuttle is home. To realize how much love and support I had from all the Tuttle fans, it shows how much of a family [this program] is. [To be a part of this program] it was something I dreamed about ever since I was a little kid.”

And since day one, Andrews has helped Tuttle win championships. In 2018, his freshman year, he was part of the undefeated Tigers team that won the Class 4A state title. Once his sophomore year rolled around, he decided to take a year off from football. He had lost in the state finals the year prior, so he wanted to focus on wrestling.

“I think that one year I took off and wrestled year round gave me a view of what it’s going to look like writing in college,” Andrews said.

But in his junior year, Andrews decided to suit up again and get back out on the gridiron. It took a while for the 6-foot-5, 240-pound athlete to get used to football again, but he has continued to play a pivotal role for the Tigers football program.

“I’ve always had a deep love for wrestling, and I love football too,” Andrews said. “I didn’t realize how much I loved football until I took a year off.”

Now in his final year at Tuttle, Harley will be aiming to be one of the best wrestlers Tuttle, if not all of Oklahoma, has seen at the high school level.  But he doesn’t credit himself. He credits the coaches that have helped him learn to be the best.

“They [Coach Williams and Coach Surber] meant a lot [to me],” Andrews said. “I moved to Tuttle in my seventh grade year, so Coach Williams has always been my coach since I was younger, and we’ve always had a special connection and I love having him in my corner. Coach Surber has been like a second dad to me. He’s helped me with the recruiting process or things that might be affecting me outside of wrestling.

And those coaches helped him find his way to Nebraska where he’ll be wrestling next year.

“A lot of people wanted me to go to OU or Oklahoma State,” Andrews said. “But I wanted to go out of state. And the coaches at Nebraska were a big part [of my decision to go there]. They talked about how the wrestling team is a family and hearing them talk about their team… it really felt similar to how Coach Williams and Coach Surber talk now.”

I want to say thank you to my family, friends, coaches, and everyone else who supported me along the way. I’m very blessed to get to live out my dream of wrestling at the next level. Thank you coach Manning and coach Snyder for giving me this opportunity! Go Huskers!!😤 #CLB #3 pic.twitter.com/PSY4aO57wz

Wrestling at Nebraska is a year away and Andrews is focused on helping the Tigers capture another state championship in football. But as soon as that season’s over, he’ll shift his thoughts to wrestling in the winter. And because the expectation in Tuttle is to win, Andrews has nothing but winning on his mind now.

“I’ve been a part of some great teams that have had great leaders,” Andrews said. “So now to be a leader as a senior and help lead the team to another state title is special. But while doing that, we need to wrestle as a team and wrestle for each other, we can keep the tradition alive.”