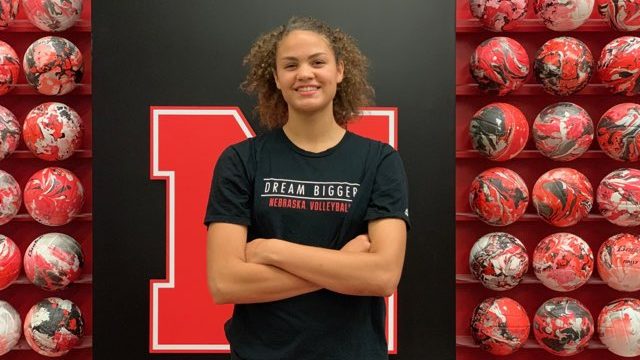 WAVERLY, Neb. (BVM) — The past year has been an emotional journey for Bekka Allick.

It began in a match against Wahoo on Oct. 6, 2020, when the Waverly High School volleyball star suffered a fractured tibia that ended her junior season a month prematurely and started a long process to get back on the court.

“When I was officially told that it was broken, that was the worst news I could receive,” Allick said. “Being told that no matter what I could do, that it wasn’t going to heal on time and that if I tried to push it, it was going to make it worse… I just felt like I was being starved. I couldn’t do anything and it was frustrating and the only thing I could do was take it very slow.”

Following months of rehab, healing and recovery, Allick finally returned to full strength in May. Two months later, her hard work was rewarded when she was selected to be one of 24 players on USA Volleyball’s Indoor Girls U18 National Training Team roster. Then after training with the team in Anaheim, California, the senior Nebraska Cornhuskers commit, who dreams of one day competing in the Olympics, was picked as one of only 12 players to represent the U.S. at the FIVB U18 World Championships on Sept. 20-29 in Durango, Mexico.

Allick would help Team USA bring a bronze medal home from the trip to Mexico which she fittingly described as “a trip of emotions.” Not unlike much of her yearlong journey to that point.

“One thing that stuck out to me the most during the trip was the very last day during the medal ceremony, we got to finally interact with the fans fully, and when we got to go up to them and hug a couple and I remembered there were these two girls who were literally balling when they asked to take a picture with me,” Allick said. “And it just made me realize I only had ever thought of where I was through my eyes, like what I was going through. I got to see it from another perspective which was these girls… They think we’re these megastars and they’ve probably never seen females built like us that can do what we can do. So it made me appreciate what I have even more.”

What Allick has when she’s on the volleyball court is a unique skill set and talent that sets her apart from most of her peers. The 6-foot-4 middle blocker, who can routinely average 20 kills per match, is not only a dominant presence at the net who can also be a team’s top passer and defender on any given night, but she’s also usually the most intelligent player on the court.

“Something that’s really unique about Bekka is she’s probably one of the most cerebral kids I’ve ever coached,” Waverly head coach Terri Neujahr. “She analyzes everything and she sees volleyball more from a coach’s perspective and a technical perspective more than everybody else in the game.”

Allick’s talent and potential has been evident for a while now, and her college plans have been known since he was only an eighth-grader. She was committed to Nebraska before she began her high school career at Lincoln North Star, which she transferred from following her sophomore year.

“It was the kind of feeling that it was just home,” Allick said of her early commitment to the Cornhuskers. “As much as I love to travel and meet new people, there was just something very different about Nebraska. I moved a lot as a kid and so having somewhere like this and it being so elite, it’s almost like God put it right in my lap.”

By joining the perennially powerful Huskers next year, Allick will be following in the footsteps of a talented 2021 Nebraska recruiting class that’s led by former Omaha Skutt star Lindsay Krause. The state’s reigning Gatorade Player of the Year won four straight state titles with the six-time defending state champion SkyHawks and also led the U.S. U18 national team to international gold in 2019. Krause is already an impact starter as a freshman outside hitter for the No. 10-ranked Huskers, and Allick is eager to join her in 2022.

“Krause has always been improving and she still is,” Allick said. “I’m going to be with girls that yes they are aware that they’re good, but they know that they want to continue to do well and they want to be at the top. They’re not satisfied. They want it every year, every game, and those are the kind of girls I want to hang with. There’s no way I want to be on the other side of the net against them.”

Before Allick can team up with Krause and company at Nebraska, she has a final season to finish with Waverly teammates, including her sister Hannah, the team’s starting senior setter. And after losing the opportunity to help the Vikings make a deep postseason run last year when they lost in the first match of the state tournament without their star, Bekka is looking forward to being on the court all the way to the end this fall.

No matter how it ends for Bekka at the high school level, her volleyball journey won’t be anywhere close to ending. The same could probably be said even when she’s done at Nebraska.

“She has dreams of being on the Olympic team and she was talking about that even in middle school,” Neujahr said. “And I know that she has the drive, she has the desire and she has the physical tools to be able to do that.”

After an emotional year that culminated with an eye-opening experience in Mexico with the U18 national team last month, Bekka is now more driven than ever to live out that dream.

“By the end of the trip, though I was being stretched, physically, mentally and emotionally, I was like ‘I want to do this,’” Bekka said. “Though it’s hard as hell, I love it. I’m always going to come back to it. No matter how much I get beat up, that’s part of it, that’s what it’s going to take. … I want to keep up and then at one point I want to thrive. I would love for that to be my job and I would love to represent my country more than anything.”