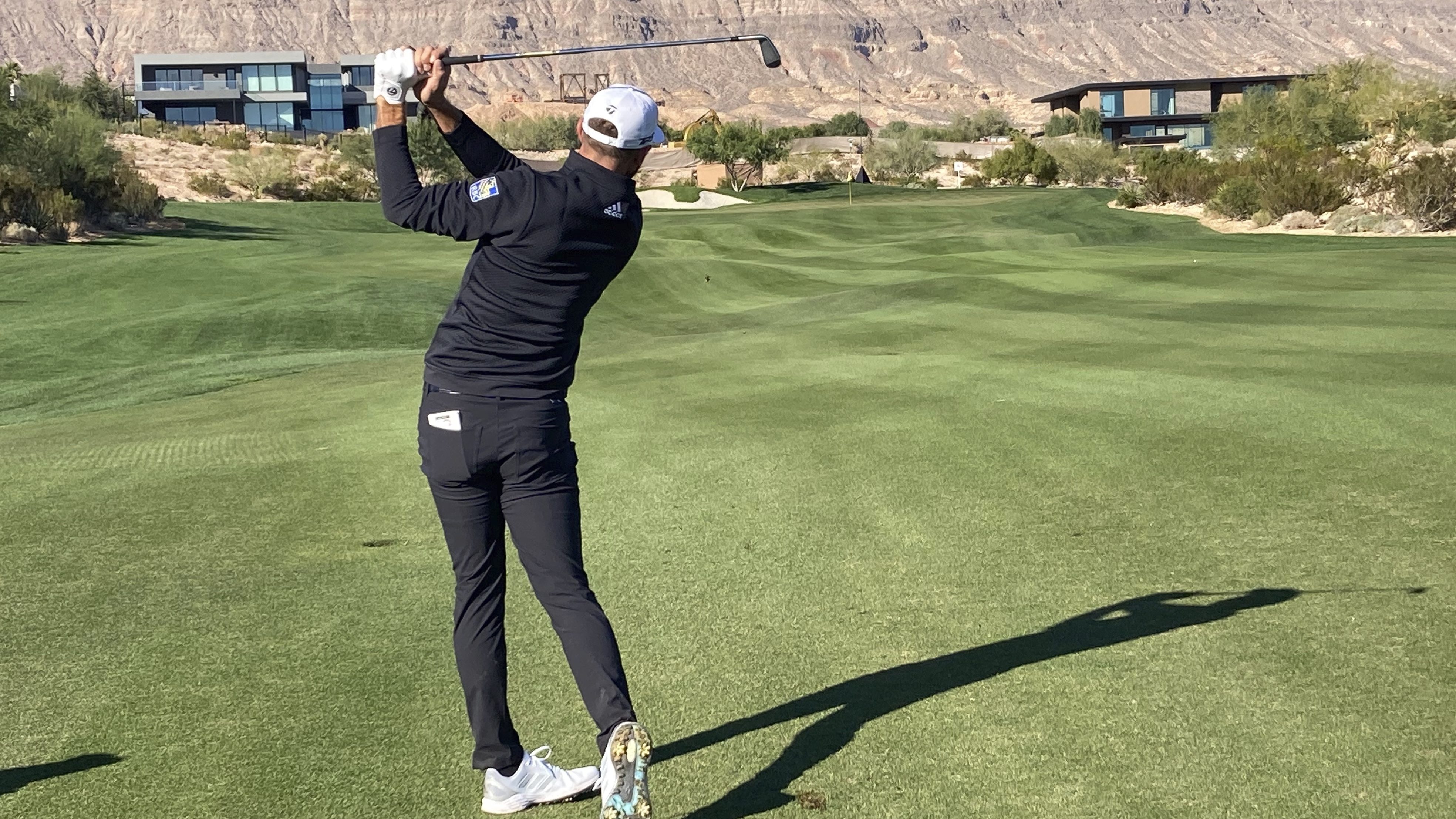 Dustin Johnson hits to the eighth green at The Summit Club during the pro-am at the CJ Cup at The Summit golf tournament on Wednesday, Oct. 13, 2021, in Las Vegas. The South Korean-based tournament is being held in Las Vegas for the second straight year because of pandemic restrictions. (AP Photo/Doug Ferguson)

LAS VEGAS (AP) — Dustin Johnson hasn’t played much golf since becoming the first American in more than 40 years to win all five of his matches in the Ryder Cup. He still remembers the basics.

“You try to keep it in the grass and not the desert,” he said Wednesday as he stood on the eighth tee at The Summit Club.

And then he pulled his tee shot into the rocks and desert bushes.

It was only a pro-am round for the CJ Cup at Summit, and Johnson is confident some of the best form he had all year at Whistling Straits is not about to leave him now.

But he is running out of time.

The CJ Cup, which has moved from its home in South Korea to Las Vegas for the second straight year because of the pandemic, might be the last PGA Tour event he plays this year. And that means his last chance to win on the PGA Tour, something Johnson has done all but one of the 14 years he’s been on the PGA Tour.

Rory McIlroy didn’t realize that until he sat down for breakfast with the world’s No. 2 player.

There is no additional sense of urgency with Johnson — there rarely is — though it’s another layer of motivation for him.

The year hasn’t been all bad. He won the Saudi International on the European Tour in early February. He went 5-0 at the Ryder Cup (his performance in the winning news conference might have been even better).

But he’s been eligible for the winners-only Sentry Tournament of Champions every year except for 2015. He has won it twice. And right now, he’s not in the field.

“That’s definitely something that I’ll always shoot for, and it’s a golf tournament that I always love playing,” Johnson said. “I feel like that’s a good start to the year if you’re playing in Maui.”

There would be other opportunities after the CJ Cup, though he doesn’t sound terribly interested in anything but a long rest.

That wasn’t the case for most top players at this time a year ago. The CJ Cup looks like a repeat from 2020 by being held in Las Vegas — it was at Shadow Creek a year ago — in the middle of October with the season winding down.

One big difference: A year ago, the pandemic-delayed Masters loomed in November. No one was interested in taking a big break, not with an Augusta National green jacket to be won.

“It was a pretty intense end of the year, everyone trying to get ready,” McIlroy said. “Masters was only a few weeks away and you were building toward something. And here, I guess you’re starting off your season … not looking too far ahead to this massive thing.”

Johnson is among six Americans playing for the first time since the Ryder Cup. The list includes Collin Morikawa, who is a member at The Summit Club and has a home-course advantage.

The private club, with a view of the Las Vegas Strip on the horizon and sound of jackhammers from home construction, is a Tom Fazio design and typical of the desert with the contrast of brown and green and pure greens.

The par 5s are reachable. There are a few par 4s that are close to being reachable. No one is expecting a U.S. Open to break out this week.

“This is a course I come during my off weeks,” Morikawa said. “I’m in a cart, I go and play five holes, 18 holes, 36, whatever it may be. I’m not sure how I’m really going to go into this week just mentally about that, but I have to remember that this is still a tournament. This is the start of a new season and I’ve got to be ready by Thursday just like every other week.”

For some, the new season will have to wait. Patrick Cantlay is not playing the PGA Tour the rest of the year, while Bryson DeChambeau and Daniel Berger have yet to play since the Ryder Cup.

Johnson wound up missing this tournament last year when he had a positive COVID-19 test that kept him out for two weeks. It had a happy ending when he won the Masters in November with a record score.

Now he’s returning from a post-Ryder Cup break in what could be his last event of the year.

“Had a really nice Ryder Cup and hopefully can just build off of that a little bit,” he said.