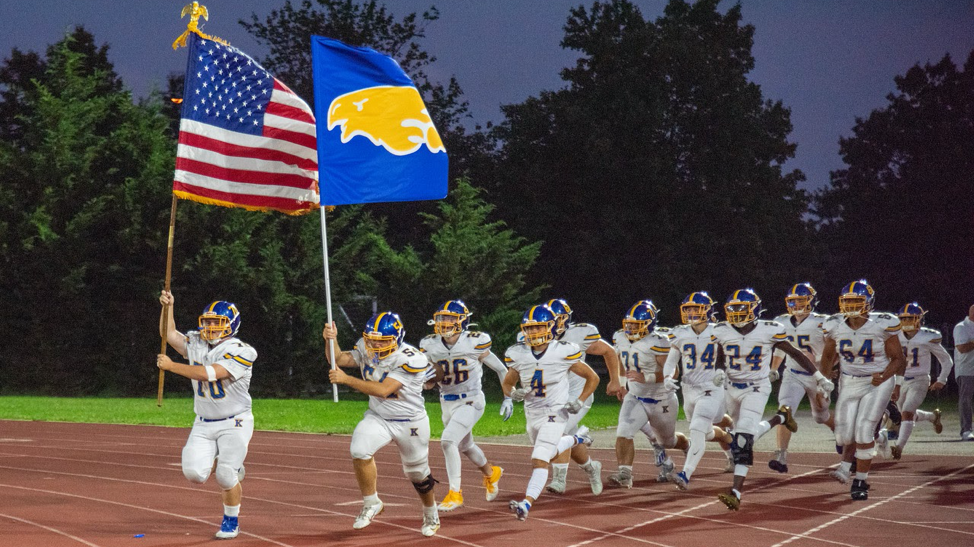 The Firebirds are looking for another dominant season after a 4-2 season in 2020. (Courtesy: Kellenberg Photography Club, ETV and Social Media Club)

UNIONDALE, N.Y. (BVM) — When it comes to the sport of football, Kellenberg Memorial High School (KMHS) has excelled as being one of the premier teams in the state.

Kevin Hanifan, who has had a long tenure as the head coach of the Firebirds varsity football team, looks to lead his KMHS to another winning season. The past four years have been very kind to the Firebird football team, as the blue and gold haven’t witnessed much losing.

In 2017 and 2018, the Firebirds had back-to-back undefeated seasons and won the Catholic High School Athletic Association (CHSAA) championship in both years. Coach Kevin Hanifan was also named the New York State Coach of the Year due to his terrific season in 2018.

In the fall of 2020, the season was put on hold due to the COVID-19 pandemic, but play resumed in the spring, where the team was given six games to refresh and prepare for September. The Firebirds would go on to finish with a record of 4-2.

Currently in the middle of their season, the Firebirds look to continue their run as one of the top football teams in all of New York.

The season started on a bit of a rough note for Kellenberg, losing its first game of the season to the St. Francis Red Raiders by a score of 24-21.

That season opening loss gave the Firebirds a wake up call, as the loss would ultimately motivate them to push through and continue their season on a good note.

The Firebirds who lost their most recent matchup enjoyed an early three-game winning streak. After the opening loss to St. Francis, Kellenberg would pick up its first win of the season, beating the Xaver Knights 47-7. The following week, the versatile team would get their second win of the season in dominating fashion by beating the Fordham Prep Rams by a score of 38-10.

The team got their most recent victory by defeating the rival school, Chaminade Flyers, with a final score of 35-8.

The key components to the team’s success can be attributed to seniors likeEthan Greenwood, who has led the way with his arms and legs as a dual-threat quarterback. Greenwood broke out for 238 passing yards and scored three total touchdowns in the season opener against the Red Raiders.

The following week, Greenwood ran for over 100 yards and scored two rushing touchdowns against the Knights. Running back Brendan Leahy has added to the offensive firepower, as well. Jaden Lyons and Peter von Schoenermarck have led the receiving core, and Rino Monteforte has made a difference as an impact player on both the offensive and defensive line.

The KMHS Firebirds currently have four games left in the season before playoff action begins. Their next game is against Monsignor Farrell.