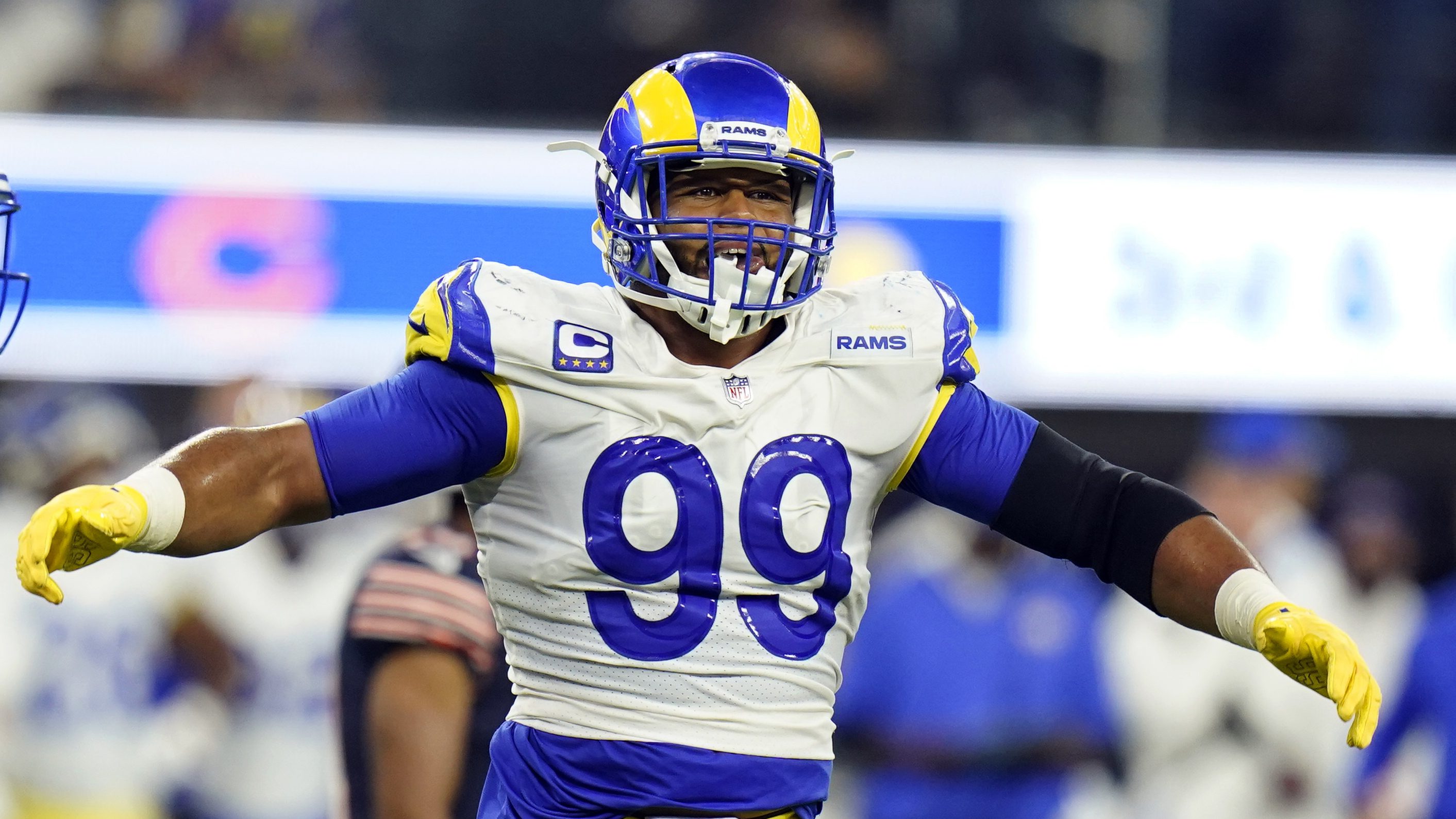 FILE- In this Sunday, Sept. 12, 2021, file photo, Los Angeles Rams defensive end Aaron Donald reacts during the second half of an NFL football game against the Chicago Bears in Inglewood, Calif. Donald's first game in his 30s looked like most of his dominant performances from his 20s with the Rams. (AP Photo/Jae C. Hong, File)

EAST RUTHERFORD, N.J. (AP) — The Los Angeles Rams and New York Giants are heading in opposite directions as they meet for the third time in five seasons.

The Rams (4-1) are off to another good start and in line to make the playoffs for the fourth time in five seasons under now 35-year-old coach Sean McVay.

Heading into Sunday’s game at MetLife Stadium, the Giants (1-4) are off to another horrible start and face a fifth straight losing season. It would be their second straight under Joe Judge, their fourth coach in the short span, which includes interim coach Steve Spagnuolo.

Still, McVay — whose Rams have won the last two meetings — isn’t taking the Giants lightly. He said they have playmakers, good coaches and play hard. But he likes the progress his team has made this season.

“That doesn’t mean that it’s a perfect trajectory where you’re just always on that upward tick, but you do want to see the things that we’ve emphasized continue to come to life,” McVay said. “The things that really matter. The things that end up making the difference between winning and losing, and I like where our team is at.

“There’s a lot of improvement and looking forward to seeing some of these things we’ve emphasized come to life on Sunday.”

Judge and the Giants keep saying they are making progress, but the standings tell a different story. They opened last season 1-7, and are on the same path this year.

“It’s tough, but you have to keep plugging,” Giants receiver Sterling Shepard said. “Whatever we’ve done in the past to figure (it) out midway through the season, we have to hurry up and do it now.”

Shepard went to the playoffs with the Giants as a rookie in 2016. Only losing seasons have followed.

“We’ve got to fix the things that we’re not doing well,” he said. “And that’s the bottom line.”

Jones seemed to be in Stage 4 of the NFL concussion protocol on Thursday. That’s taking part in a non-contact practice. The next step would be taking part in a full practice and then being cleared by a specialist to play.

Concussions can be tricky. Jones may be cleared to practice, but could feel dizzy after a tough workout. He also could take a hit in a game and be back to square one. Whatever happens, backup Mike Glennon is ready to go.

The Rams had the NFL’s top defense last season, but they’ve regressed after the departure of coordinator Brandon Staley — now the Charges coach — and four starters.

Los Angeles is ranked 23rd in yards allowed and 13th in points allowed. Although their pass rush is still formidable and Jalen Ramsey is having an outstanding season in his do-everything role, the Rams have enough vulnerability to give the Giants some hope. The injury absence of starting cornerback Darious Williams means extensive playing time for either rookie fourth-round pick Robert Rochell or inexperienced David Long Jr.

After watching him catch 10 passes for 189 yards — a team rookie record — expect the Giants to get the ball to elusive wide receiver Kadarius Toney. In a relatively short time, he has shown he can take a short pass and turn it into a big play with a quick feet.

While Golladay’s status is iffy for the game, Shepard and fellow starting receiver Darius Slayton appear ready to return after missing two games with hamstring injuries.

Stafford is already off to a strong start with the Rams, and the passing game is only getting better now that he’s distributing the ball more evenly among his top targets.

Cooper Kupp got the bulk of the important throws in the first four weeks, while Robert Woods was curiously underused. After a heart-to-heart talk between Woods and McVay, Stafford targeted Woods 15 times in Seattle to tremendous effect.

Second-year pro Van Jefferson is emerging as a solid No. 3 wideout, while DeSean Jackson has been an effective deep threat. McKay is using more aggressive downfield throws than he did with Jared Goff throwing.

Another reason the Giants have to be concerned: Their fans are fed up with the losing.

In their last home game, the organization retired the jersey of two-time Super Bowl MVP Eli Manning and added his name to its Ring of Honor. With New York trailing Atlanta at halftime, co-owner John Mara was booed during the ceremony.

The Giants plan to celebrate the 10th anniversary of their Super Bowl XLVI championship — the ’11 season — at halftime Sunday. It could be ugly if New York is trailing again.