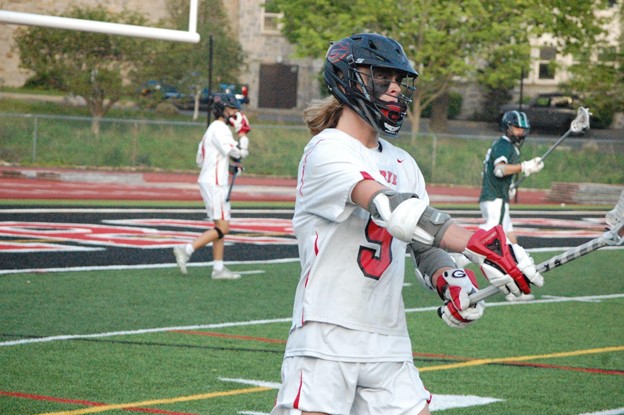 RYE, N.Y. — Rye High School’s Caden Whaling is no stranger to being a star on the field. As an award-winning lacrosse player and a dominating running back, Whaling has put his athleticism and versality on full display as he enters his senior season.

On Rye’s lacrosse team, Whaling emerged as a stud midfielder. This past spring, in his junior season, Whaling served as a team captain and scored his 100th team point, taking him just two years to do so. He was made a USA Lacrosse All-American for his accomplishments.

The Rye lacrosse team was Section 1 Class B Champions in 2021, where Whaling led the team with four goals in an 11-7 win against Yorktown.

“There’s nothing more we could’ve asked for than to win it for them, so they can see how it feels and they can come out here and do the same thing,” Whaling said after the thrilling win. “It’s about building the culture and that’s what’s important to us.”

A compilation of Caden Whaling’s lacrosse highlights during his monumental junior year showcase his incredible talent.

He is also known as the star of the Rye Garnet football team and has led the team to an undefeated record of 5-0 to start the 2021 season. In their most recent win against Harrison High School, Whaling had 175 rushing yards and one touchdown on 20 carries with an additional two receptions for 70 yards.

“The importance of the game to us is unparalleled to the games we’ve had so far this season,” Whaling said after the win. “Just to come out and be able to beat them, especially on their home turf is awesome, but props to Harrison, who fought hard all game. Great team, great coaches and it was just a fun game.”

This season, Whaling has 91 carries, 971 rushing yards, and 13 touchdowns on 11.1 yards per carry, absolutely absurd statistics for the senior running back.

This dominance is nothing new for Whaling, who ran for 901 yards, the most in Section I, and 11 touchdowns in just six games during a football season shortened by the COVID-19 pandemic. He won Section I’s Class A co-Offensive Player of the Year and earned All-Section and All-League honors. During this season, the Rye Garnets won the Class A championship.

Whaling is planning on attending the University of North Carolina on a lacrosse scholarship after he graduates this upcoming spring.

“Still being able to play football, even being committed to UNC for lacrosse is just awesome,” Whaling said in an interview with The Journal News. “There’s no other feeling like [when] you’re coming out under the lights, seeing everybody in the stands waiting just to watch a fun game of football.”