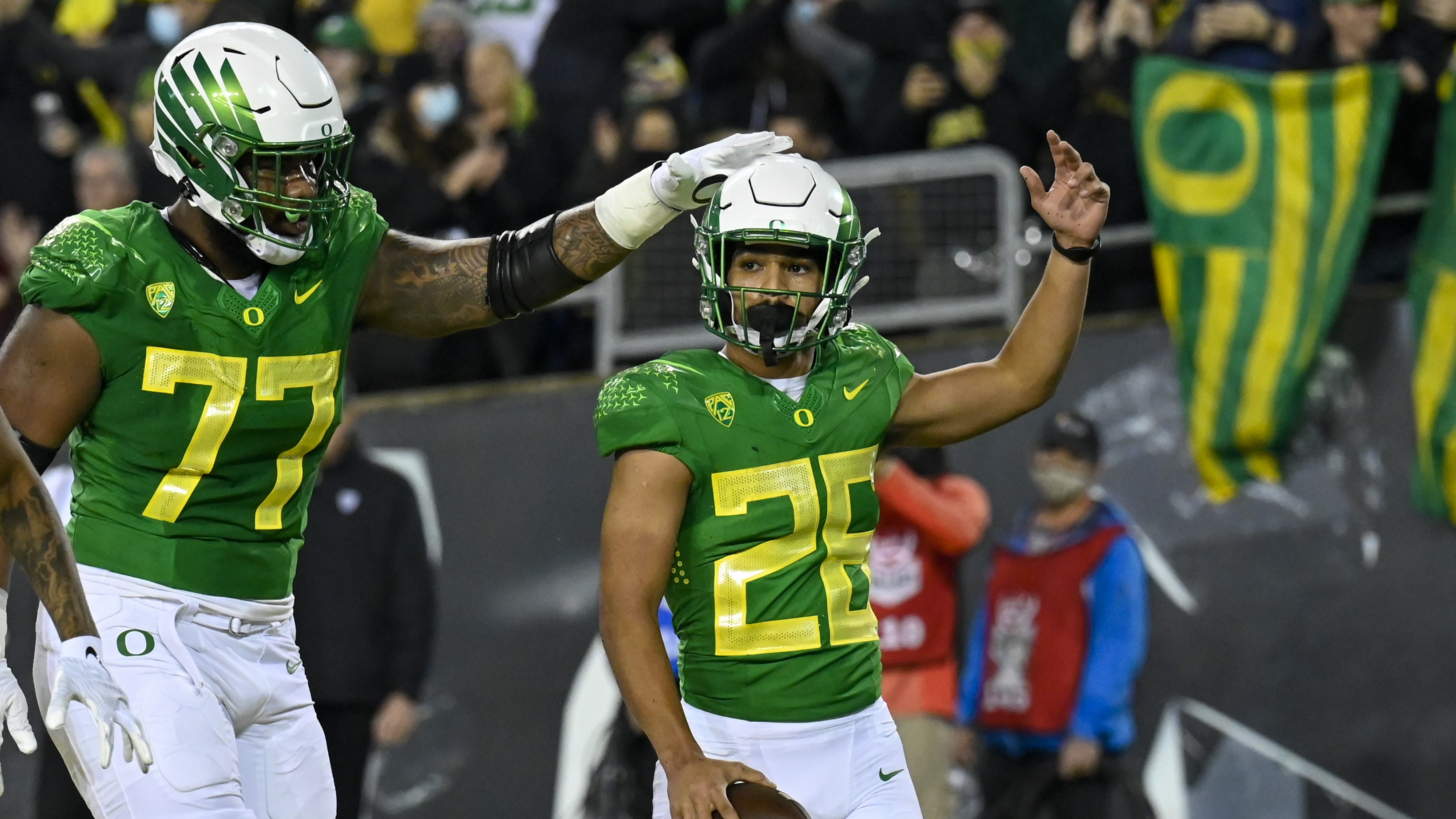 EUGENE, Ore. (AP) — Anthony Brown Jr. threw for 135 yards and a touchdown while rushing for 123 yards and another score, and No. 5 Oregon defeated Washington State 38-24 on Saturday night.

The Ducks, ranked No. 3 in the College Football Playoff rankings, have won five straight and extended their winning streak at Autzen Stadium to 18 straight games, including 14 straight victories at home over Pac-12 opponents.

Oregon (9-1, 6-1 Pac-12) needed to win and for Stanford to beat Oregon State up the road in Corvallis earlier on Saturday to clinch the Pac-12 North. The Beavers didn’t hold up their end, winning 35-14 over Stanford.

Washington State (5-5, 4-3) tied the game at 14 before halftime but Oregon pulled away in the third quarter. The loss snapped a four-game winning streak over Pac-12 opponents for the Cougars, who fell to BYU on Oct. 23 in a midseason nonconference game.

The Cougars still need one more win to become bowl eligible and perhaps redeem a season that has been marked by turbulence. Washington State dismissed head coach Nick Rolovich on Oct. 18 after his refusal to get vaccinated against COVID-19.

Saturday’s game got off to a strange start. Washington State’s second play from scrimmage appeared to be a 77-yard touchdown pass from Jayden de Laura to Calvin Jackson Jr. But on review, Jackson stepped out of bounds at the Oregon 7-yard line. On the next play, de Laura fumbled out of the end zone for an Oregon touchback.

Travis Dye plowed his way into the end zone from a yard out to give the Ducks a 7-0 lead. Verone McKinley III got his fifth interception of the season and three plays later Dye scored on an 11-yard pass from Brown.

The Cougars closed the margin on de Laura’s 14-year pass to De’zhaun Stribling midway through the second quarter. De Laura’s 1-yard keeper with 11 seconds left in the half tied it at 14.

Oregon scored on Brown’s 17-yard scramble on their first series of the second half to pull back in front. The Ducks extended the lead on Camden Lewis’ 22-yard field goal.

It appeared that Washington State’s George Hicks III recovered a fumble by Brown in the end zone early in the fourth quarter and ran it back 50 yards. After review, the play stood.

De Laura hit Travell Harris with a 38-yard pass to get to the Oregon 11, but the Ducks’ defense held and the Cougars settled for a Dean Janikowski’s 34-yard field goal to make it 24-17.

Dye ran for 88 yards and a score, and had 25 yards receiving and another TD.

De Laura threw for 280 yards and two touchdowns for the Cougars. He was intercepted twice.

Oregon: Last year in Pullman, the Cougars led 19-14 at halftime but the then-No. 11 Ducks pulled away in the second half, with Dye catching two second-half touchdown passes, to win 43-29.