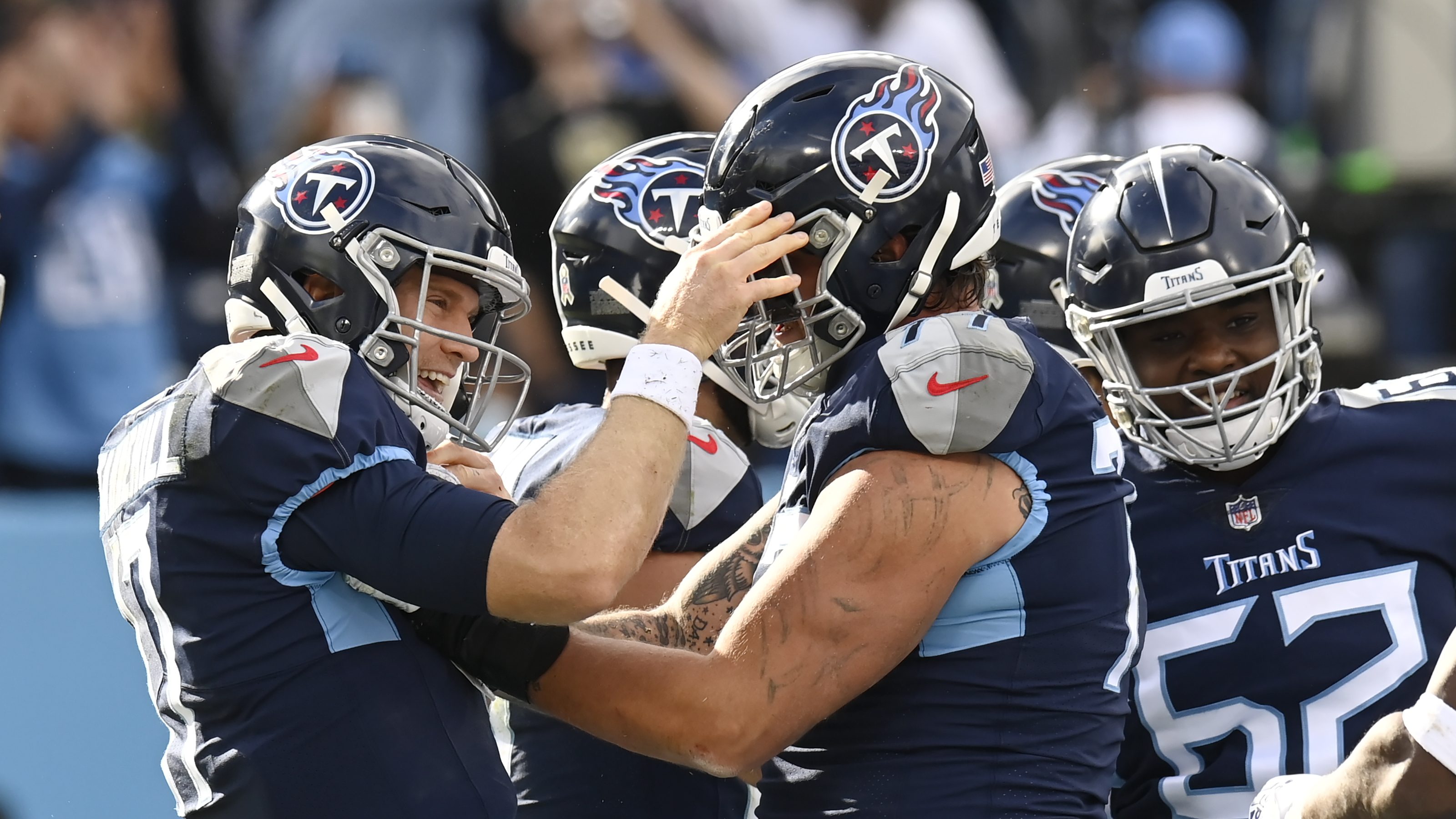 Tennessee Titans quarterback Ryan Tannehill, left, celebrates after scoring a touchdown on a 1-yard run against the New Orleans Saints in the first half of an NFL football game Sunday, Nov. 14, 2021, in Nashville, Tenn. (AP Photo/Mark Zaleski)

The Titans (8-2) also became he second team in NFL history to win five straight over playoff teams from the season before, joining the 2003 Philadelphia Eagles. Tennessee improved to 7-0 overall against 2020 playoff teams this season.

The Saints (5-4) dropped their second straight since losing quarterback Jameis Winston to a season-ending ACL injury.

Against the Titans, they also played without a trio of starters in four-time Pro Bowl running back Alvin Kamara because of an injured knee, left tackle Terron Armstead (knee and shoulder injuries) and defensive back C.J. Gardner-Johnson (foot), who was just put on injured reserve.

The Saints still had a chance to tie late.

Trevor Siemian, the Titans’ designated survivor QB for part of last season, threw a 15-yard TD pass to Marquez Callaway with 1:16 left, pulling the Saints within 23-21. But Adam Trautman was flagged for a false start, pushing the Saints back to the Titans 7 on the 2-pointer.

Siemian’s pass to Mark Ingram at the right edge of the end zone was incomplete, with Titans cornerback Jackrabbit Jenkins defending. That was the Saints’ eighth straight failed 2-point conversion over several seasons.

The Titans recovered the onside kick to seal their tightest victory yet.

The Saints could have kicked the extra point for the win if kicker Brian Johnson hadn’t missed two extra points earlier. Johnson did kick a 20-yard field goal with 5:33 left to pull New Orleans within 23-15, but the Titans stopped the Saints on five plays with goal to go trailing 23-12.

The AFC-leading Titans had some luck extending their streak.

A slight roughing-the-passer penalty on linebacker Kaden Elliss wiped out Tannehill’s interception in the end zone by safety Marcus Williams, and he later scored on a 1-yard sneak for a 13-6 lead. Tannehill also fumbled a snap at the end of the third quarter, and receiver A.J. Brown recovered for a 6-yard gain and a first down.

Dylan Cole stripped Deonte Harris of the ball on the opening kickoff of the third quarter to set up Tannehill’s 2-yard TD pass to MyCole Pruitt. That prompted fans to start volleying a beach ball around the lower bowl on the Tennessee sideline.

The ball disappeared as the Saints kept getting the football back in the fourth quarter.

Ingram, who became the Saints’ all-time rushing leader in the third quarter, scored on a 13-yard run late in the third period to start the comeback, pulling New Orleans within 20-12.

Saints: WR Ty Montgomery II went to the locker room late in New Orleans’ second series of the game with an inured finger. He didn’t return.

Titans linebacker Bud Dupree, their biggest free agent signee this offseason, went to the locker room early with an abdominal issue and was declared out. Both OT Taylor Lewan and linebacker Ola Adeniyi dealt with cramps but returned.

The Titans host the Houston Texans next Sunday.

(Corrects headline to 6 instead of 7)