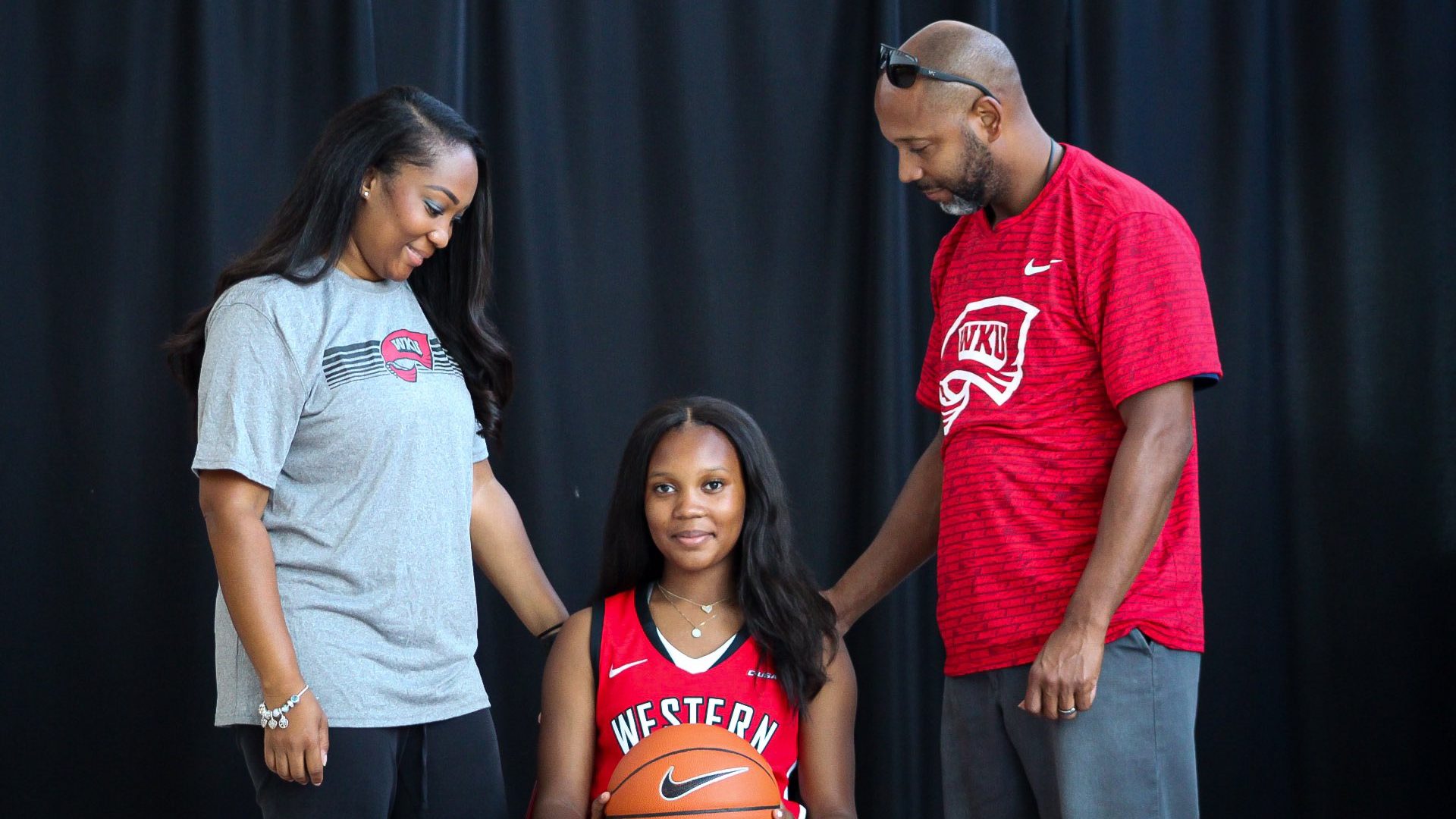 Instead of following her sisters to Mississippi State, Acacia Hayes forged her own path by committing to the Western Kentucky University women’s basketball program. (Courtesy: @acaciahayes2003/Twitter)

MURFREESBORO, Tenn. (BVM) — Coming from a family filled with basketball players, it came as no surprise that Riverdale High School senior Acacia Hayes would continue playing at the collegiate level like her sisters before her. What did come as a surprise from the outside looking in was the program she chose as instead of joining her three sisters, Aislynn, Alasia and Anastasia at Mississippi State, the youngest Hayes girl chose to go to Western Kentucky when she committed Nov. 2.

Acacia felt an immediate connection to Hilltoppers head coach Greg Collins and the coaching staff and after an unofficial visit and an official overnight, the senior knew it was the fit for her.

“Me and Coach Collins bonded instantly from the first conversation we had. Him and his staff were just awesome and so great to me from the start,” Acacia said. “I went up there for an unofficial around August or early September and I loved it. I loved the campus, but I didn’t stay long. I went back the weekend of Halloween and I fell in love with the campus, the school, him and his staff and his players. They were great. Being there a whole day I knew it was home. It felt like home.”

However, a deeper dive into what drives Acacia, specifically off the court, is where the answer to why she chose WKU comes into focus. Acacia wants to be in the medical field one day and so when she visited the campus in Bowling Green, Kentucky a few weeks ago it was the hospital and the medical school that stole her heart, though the benefits of the Hilltoppers basketball program didn’t hurt either.

“I had to do what was best for me and my education further than basketball,” Acacia said. “WKU has an awesome medical program.”

Of course, with most of your family attending one school that program gets its fair share of attention. Acacia enjoyed what the program had to offer and of course the opportunity to play with her sisters once again, but in the end WKU provided her just a bit more opportunity to do what she wanted to do for her future both on and off the court.

“My sisters have always supported me. They have always been my number one fans,” Acacia said. “Who wouldn’t want to play with their sisters, you know? That’s family right there and three sisters at that, but education-wise WKU was the better school for what I want to do and what I want to be than Mississippi State was and they understood that. I talked to them about it and they were supportive about it. It was a hard decision, but you have to do what’s best for you at the end of the day.”

Acacia, who is rated as a four-star recruit and the No. 22 player at her position by ESPN, has been considered by members of the family as the best of the four sisters. With all three siblings at one of college basketball’s best programs and one being the second-highest scorer nationally a year ago, that’s high praise.

“Growing up I was the last sister so pressure was always on me especially when it was only me left,” Acacia said. “Growing up with [my sisters] it made me better and they pushed me to be the best I could be. My sisters always told me since I was a little girl that I was going to be the best one and having sisters tell you that all your life really helps. That took off the pressure and I just worked hard.”

So far in her prep career, Acacia has certainly made the argument for being the top Hayes sister. As a freshman, the youngest sister played an integral role on a Riverdale team that made the state semifinals before losing her entire sophomore year to a knee injury. Fast forward to this past year, her junior season, and Acacia once again put the Hayes family on the map in Tennessee prep basketball. She was named a Class AAA Miss Basketball finalist and a first team all-state member after she averaged 19.9 points, 5.3 rebounds, 2.5 assists and 2.1 steals.

With one season left to go at Riverdale, Acacia is looking to do something each of her sisters did — win a state championship. The year before she came to the Warriors, the program won three straight Class AAA state titles thanks mostly to her sisters who led the way for the team. Unfortunately for Acacia, she barely missed out on the opportunity and has yet to win the coveted championship. However, as one of the top players in her state, the title is well within reach for the 5-foot-7 guard.

Now with the pressure of her college decision off her shoulders, Acacia will look to once again bring the Hayes family to the top of Tennessee prep basketball. As one of the most skilled players in the entire country, expect Acacia Hayes to be firmly in the discussion for Miss Tennessee Basketball this season and to hear big things about her during her time at Western Kentucky.

“The goals that I’m setting for myself is to improve my game and make sure by the time the season ends or by the time I’m stepping on the court at a different level that I’m ready,” Acacia said.