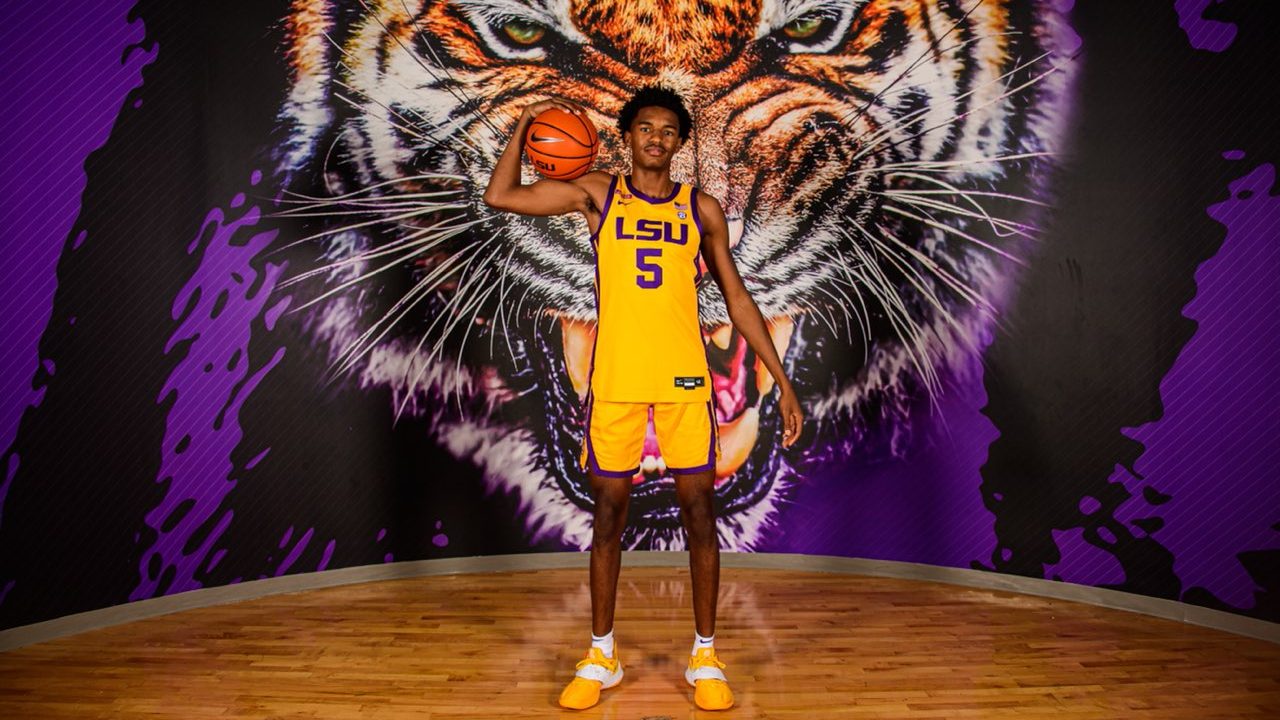 BRANSON, Mo. (BVM) — One of the top basketball recruits in the country has finally made a long-awaited college decision. Five-star Julian Phillips had offers from numerous Division I schools, but ultimately, it was Coach Will Wade and the LSU Tigers that won out.

“What sold me with LSU was just how much Coach Wade showed that he wanted me throughout the recruiting process,” Phillips said. “I spoke with him the most out of every school that recruited me.”

The (5) stars align… @ju1ianphillips is officially a Tiger 🤩

Through the past several months, Phillips has had an opportunity to form a tight bond with Wade. It is that bond that makes the five-star commit thrilled to get to Baton Rouge.

“I have a great relationship with him and we still talk every other day,” Phillips added. “I’m really excited. I think he’s a great coach and he runs a great program. With my game and what I can bring, I think it will flourish well in LSU’s system.”

There is no doubt that Wade and the Tigers are excited to see Phillips suit up for them as well. Phillips had a final-four list of schools that included the likes of Tennessee, Florida State and USC.

He also had offers from numerous Division I powerhouse programs, including Alabama, Kansas, UCLA, Clemson, Florida and Virginia.

The recruiting process was a humbling and exciting journey for the 6-foot-8 forward, but his college basketball dreams had been long in the making, ever since he first stepped foot on the hardwood.

“It really was my older brother,” Phillips said about how he got into the sport. “He really got me playing. He played basketball and I just really looked up to him a lot. It’s something that he thought I could do and he really got me into the game and taught me the basics.”

Growing up in Blythewood, South Carolina, Phillips initially competed in local rec leagues, and eventually moved to the AAU level, playing with the Capital City Vipers through eighth grade. At his middle school in eighth grade, Phillips also helped lead his team to its first undefeated district championship season. It was around this time that the basketball standout realized his immense potential in the sport.

“I would say around eighth or ninth grade, I really knew that if I worked as hard as I can, I can do something special with it,” Phillips mentioned.

As he began playing at Blythewood High School, Phillips continued to display his talent and his strong versatility on the court. When he was a freshman, Phillips competed alongside now Iowa State Cyclone Tre Jackson, learning plenty from the standout guard. He also gained plenty of knowledge from Coach Ezekiel “Zeke” Washington.

“Coach Zeke Washington was great my whole entire time being there, I had a great time learning the game under him,” Phillips said. “When I got there my freshman year, we had Tre Jackson. I learned a lot early on from him. All the coaches there were great and I learned a lot from them all.”

The forward’s role continued to grow through each of his seasons at Blythewood, culminating in a terrific junior season where Phillips averaged over 20 points per game for the Bengals and became an all-state player for the third consecutive year.

However, like many top recruits, Phillips decided he would attend a prep school for his senior season to get him further ready for the college level. That led him to Branson, Missouri to play for Link Year Academy.

“I felt like this was the move for me to be as best prepared for college as I could be,” Phillips said.

Specifically, Phillips was drawn in by the opportunity to play for Coach Rodney Perry, who he believes will have him ready for his time at LSU.

The Lions are still in the early stages of the 2021-22 campaign, but already, the five-star is enjoying his time in Missouri. Of course, he is already displaying some of the incredible athleticism that makes him such a special talent as well.

“It’s been going great so far,” Phillips said. “The personal goals for me are to just keep growing each and every game and keep getting better and better as the days go. Being able to grow and get better day in and day out … ultimately the work is going to pay off in the long run.”

Phillips will play out his senior year as a consensus top-15 player in the Class of 2022, and the top-ranked player in Missouri by 247sports. Seeing his name at the top of those lists is humbling for the forward, but he also realizes there is plenty left to prove.

“It’s definitely a blessing,” Phillips said. “But you don’t think about it too much because ultimately it’s just a number, you still have to work hard day in and day out. You just have to keep level headed with it all, don’t get too high and don’t get too low.”

For Wade, Phillips becomes one of multiple five-star talents he has brought in during his time in Baton Rouge, and is the second player committed in LSU’s 2022 class. With an abundance of talent already suiting up for the Tigers this year, the sky’s the limit once Phillips gets there.

“I think with the guys we’ll have, we’ll be able to compete with anybody,” Phillips noted.

Whether Blythewood High School, Link Year Academy or LSU, each stop for Phillips is a stepping stone to his ultimate goal: playing in the NBA. As he continues to model his game after the likes of similar sized forwards such as Paul George, Kevin Durant and Jayson Tatum, Phillips believes that after his time at LSU, he may just be competing against some of those guys.

“It would mean a lot, it’s been my lifelong dream to be an NBA player,” Phillips said. “It will take a lot of hard work and a lot of dedication. I want to be a long-lasting pro and play a 20-plus year career if I can. That’s what I hope my career looks like if I have the chance to get there.”