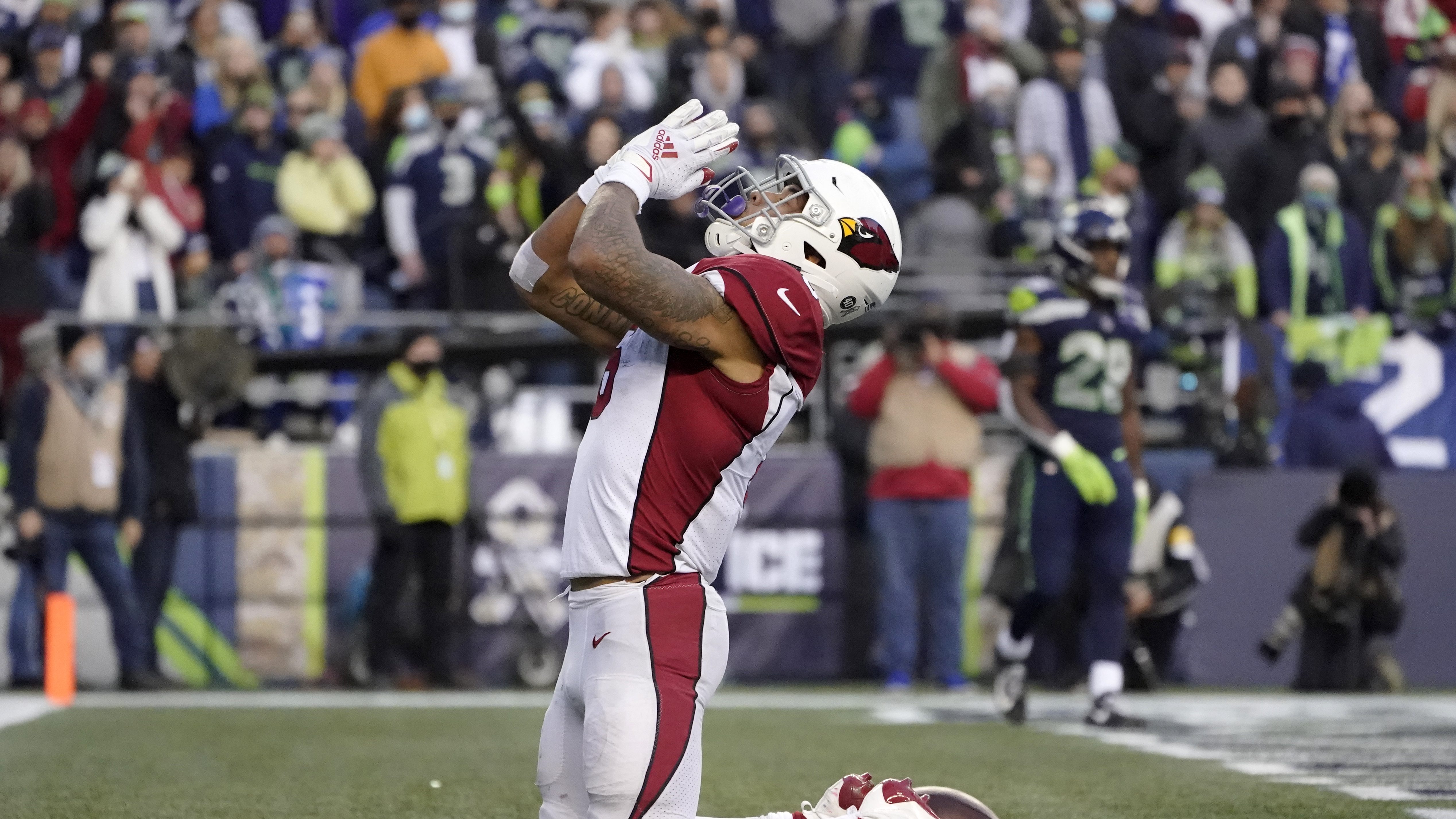 Arizona Cardinals running back James Conner kneels in the end zone after scoring a touchdown against the Seattle Seahawks late in the second half of an NFL football game, Sunday, Nov. 21, 2021, in Seattle. (AP Photo/Ted S. Warren)

SEATTLE (AP) — When called upon three weeks ago, Colt McCoy viewed himself as a caretaker.

The Arizona Cardinals were already off to a terrific start. McCoy’s job when Kyler Murray went to the sideline with an ankle injury was to avoid giving away what the Cardinals already accomplished.

McCoy more than did his part, and his best performance was likely his last start for Arizona. With Murray out one more week, McCoy threw for 328 yards and two touchdowns, and the Cardinals beat the Seattle Seahawks 23-13 on Sunday.

McCoy went 2-1 with Murray sidelined, including divisional road wins at San Francisco and Seattle. The Cardinals will go into their bye with the best record in the NFL and the expectation of Murray and DeAndre Hopkins returning after the break.

“It’s just my responsibility. That’s how I see it,” McCoy said. “I came here to be a part of this team and this group, and when your number’s called, that’s my role, and I’m proud to have won a couple games on the road.”

For the second straight season, McCoy was a backup thrust into a starting role in Seattle and walked away with a victory. Last year, McCoy was with the New York Giants and pulled off a December win in an empty stadium.

This time, McCoy helped silence Lumen Field and sent fans to the exits early. McCoy went 35 of 44 and thoroughly outplayed Seattle’s Russell Wilson in his first home start since undergoing finger surgery. McCoy threw touchdown passes of 1 and 2 yards to Zach Ertz in the first half, got a bit of luck in the third quarter when a potential interception was overturned on replay, and had his first 300-yard passing game since 2014.

“There’s no worse feeling than losing before the bye, so finding a way to win before this was definitely a big goal of ours,” Ertz said.

Arizona (9-2) had scoring drives of 92 and 82 yards in the first half that ate up 16 minutes. The Cardinals ran off another 7½ minutes early in the fourth quarter but Matt Prater missed his second field goal attempt, from 36 yards to give Seattle hope.

After 20 straight offensive drives without a touchdown, DeeJay Dallas scored on a 2-yard run with 7:08 left to pull Seattle within 16-13. The drive was keyed by a 48-yard pass to Tyler Lockett.

But McCoy put the game away with another terrific possession that included a 20-yard pass to Ertz on third-and-7 and two designed runs for first downs. James Conner capped the drive with a 1-yard run with 2:20 left that sent Seattle fans streaming for the exits.

“We had to have it when we made that drive, and just a real great response from that offensive unit,” Arizona coach Kliff Kingsbury said.

Ertz had eight catches for 88 yards and Rondale Moore at 11 receptions as the Cardinals used a variety of options to make up for the absence of injured DeAndre Hopkins.

And they may have helped provide the final blow to Seattle’s lifeless season.

“I’m just disappointed I have to keep coming back and talking about the same stuff,” Seattle coach Pete Carroll said. “I don’t feel like I have good answers for you because our answers so far have not turned it.”

The Seahawks (3-7) lost their second straight and for the fifth time in the past six games. Their offense was abysmal, their defense failed to get third-down stops, and Seattle was regularly booed by the home fans after its fourth home loss of the season.

Wilson looked confused and indecisive, and didn’t get help from his receivers at times. Play calling didn’t help, with strange decisions to target Dallas and Penny Hart on key third downs in the second half.

Seattle went 20 straight drives without a touchdown before Dallas’ TD run midway through the fourth quarter. Wilson was 14 of 26 for 207 yards. Seattle punted on five of its first seven possessions and Wilson was sacked four times, 2½ coming from Chandler Jones.

“To walk off the field with the best record in the NFL, it’s an an amazing feeling,” Jones said. “It goes to show you that none of the work goes in vain that we put in throughout the week.”

Seattle seemed to get a break when Sidney Jones intercepted McCoy and returned the pick to the Arizona 11 in the third quarter. But after a lengthy review, officials ruled the ball hit the ground and the interception was overturned. Arizona punted — a 67-yard difference in field position for Seattle.

Arizona is 6-0 on the road and all have come by 10 or more points. According to the Cardinals, they are the third team in league history to win their first six road games by double figures, joining the 1968 Cowboys and 1936 Bears.

Seattle rookie CB Tre Brown suffered a patellar tendon injury to his knee late in the first half. Brown was down for several minutes and limped directly to the locker room. The Seahawks were already without starting CB D.J. Reed, who was inactive.

Seattle RB Rashaad Penny ran for 18 yards on the first play and immediately went to the injury tent with a hamstring injury. He returned briefly in the second half.

Cardinals: Arizona is on its bye next week.

Seahawks: Seattle is at Washington on Monday, Nov. 30.