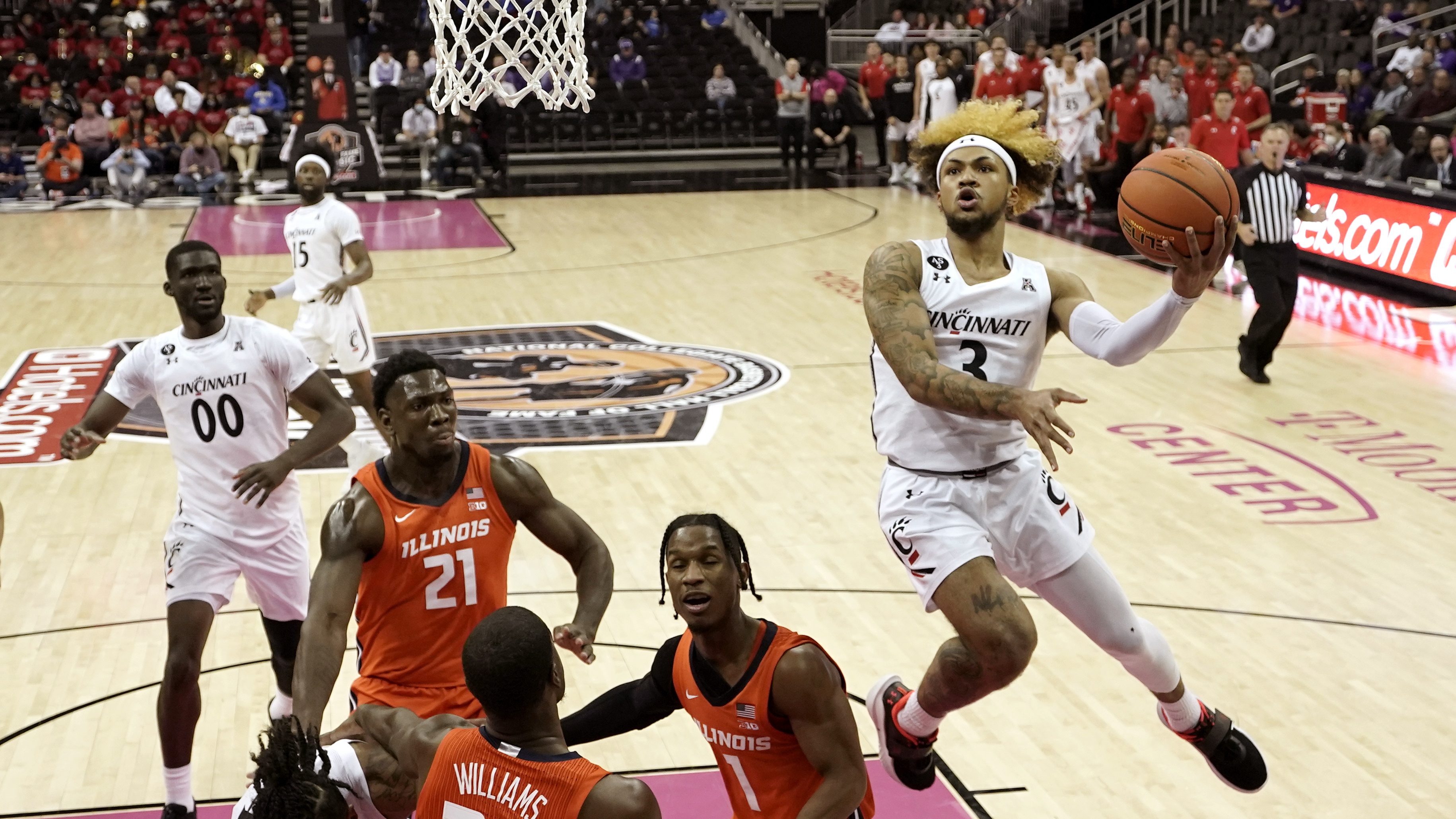 KANSAS CITY, Mo. (AP) — Mike Saunders Jr. scored 20 points, Jeremiah Davenport added 19 and Cincinnati overcame an early 15-point deficit to blow out No. 14 Illinois 71-51 on Monday night in the semifinals of the Hall of Fame Classic.

The Bearcats (5-0) trailed 23-8 in the opening minutes before charging back to take a 34-31 lead at the break. They piled on from there, pushing the advantage past 20 by the midway point of the second half as they coasted into the championship game against the winner of No. 13 Arkansas and Kansas State on Tuesday night.

Kofi Cockburn, who was suspended the first three games of the season for violating NCAA rules, had 18 points and seven rebounds for the Fighting Illini (2-2). Andre Curbelo added 12 points on 4-of-12 shooting with five turnovers.

The Illini looked as if they were going to blow out the Bearcats in the first 10 minutes.

Cockburn had a big part in it.

The 7-foot, 275-pound center from Jamaica bullied his way to six straight points to open the game, and the Illini raced to a 19-4 lead before the Bearcats seemed to realize the game had tipped off. At one point, Cockburn had outscored Cincinnati 12-8 as the Illini built a 23-8 advantage nearing the midpoint of the first half.

That’s when Bearcats coach Wes Miller made a couple of subtle adjustments that got them on track.

They slowed Cockburn with physical double-teams in the post, and they began jumping the passing lanes, and at one point the Bearcats held Illinois without a field goal for nearly seven minutes. They pieced together a 14-1 run of their own during the stretch, and David DeJulius made a couple foul shots just before halftime to give Cincinnati a 34-31 lead.

The Illini’s slump endured well into the second half.

Davenport drilled a 3-pointer right out of the locker room, and Illinois proceeded to miss 10 consecutive field-goal attempts at one point, as the hot-shooting Bearcats’ stunning run eventually reached 22-5 to start the second half.

It was about that point Illini coach Brad Underwood tore the wrapper off a piece of gum.

The nation’s top-ranked defense through the first couple weeks of the season suddenly struggled to guard the Bearcats on the perimeter. And regardless of whether Cockburn wasn’t in the lineup, the Illini had trouble chasing down deep rebounds, which gave Cincinnati second and third chances on several trips down the floor.

That was enough to send the Bearcats to their first win over a ranked team since beating Tennessee on Dec. 18, 2019.

Illinois was two different teams the first 10 minutes and the final 30. Cockburn was aggressive going to the basket, and Curbelo and the rest of the Illini guards took care of the ball. But once the middle bogged down, Illinois lost all semblance of offensive rhythm. It wound up 3 of 22 on 3s and shot 28% from the field overall.

Cincinnati still hasn’t played from behind in the second half this season. But the way the Bearcats handled the Illini was far more impressive than opening wins over Evansville, Georgia, Alabama A&M and Presbyterian.

The Bearcats advanced to Tuesday night’s title game. The Illini will play for third place.