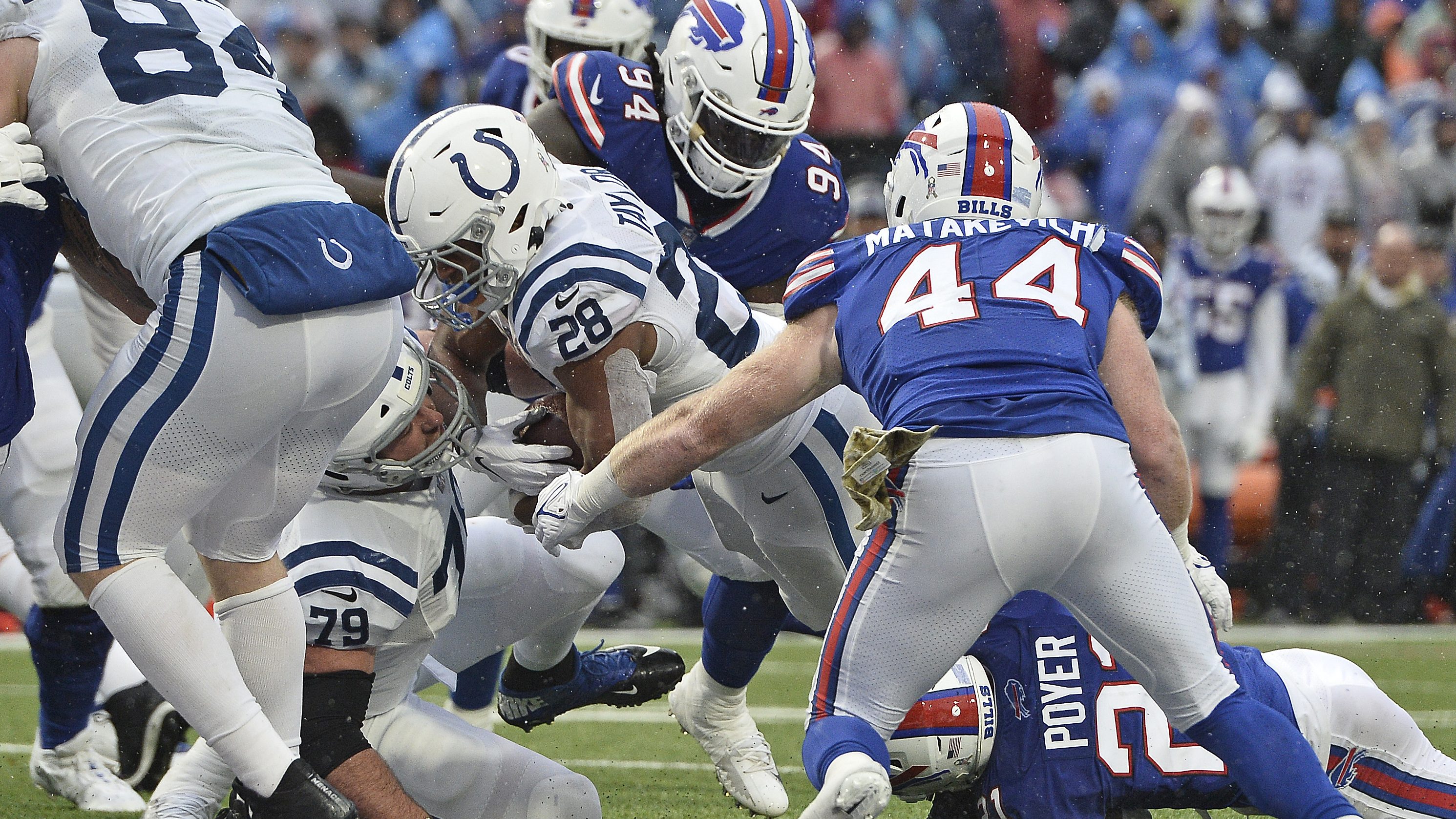 Indianapolis Colts running back Jonathan Taylor (28) scores during the second half of an NFL football game against the Buffalo Bills in Orchard Park, N.Y., Sunday, Nov. 21, 2021. (AP Photo/Adrian Kraus)

INDIANAPOLIS (AP) — The Indianapolis Colts sent a loud, clear message to the NFL on Sunday.

After starting 1-4, the Colts have scrapped their way back into the postseason conversation by winning five of six. And on a windy, rainy day in Buffalo, Indianapolis provided an emphatic answer to critics who questioned its ability to beat a legitimate contender by routing last year’s AFC runner-ups 41-15 — their first win in six games against 2020 playoff teams.

Now the playoff talk is no longer just idle chatter.

The Colts (6-5) have been fighting their way back by successfully doing both.

Taylor has quickly emerged as the top contender to dethrone two-time defending NFL rushing champ Derrick Henry, who remains out following foot surgery. The Colts’ second-year back has topped 100 yards from scrimmage and scored a touchdown in an NFL record-tying eight straight games. Taylor battered the Bills’ top-rated defense for 185 yards on 34 carries before a well-deserved early exit.

By forcing four turnovers and limiting Buffalo’s high-powered offense to 221 yards and one touchdown through three quarters, the Bills’ ground game never got started. It’s a script coach Frank Reich, one of the league’s top comeback artists, believes in whole-heartedly.

He saw it work when Indy rebounded from a 1-5 start to make the playoffs in 2018, and also when he led Buffalo to the greatest comeback in NFL history against Houston in the playoffs in January 1993.

And Reich senses it’s working again with a team suddenly clicking on all cylinders.

Indy’s offensive line. Taylor leads the NFL with 1,122 yards rushing, 13 TD runs and 15 total touchdowns while averaging 5.8 yards per carry. He couldn’t produce those numbers without a strong offensive line, which is playing at its traditionally high standard after a rash of early-season injuries.

Tight end contributions. It may be a picky point after a completely dominant game, but the Colts have leaned so heavily on Taylor and receiver Michael Pittman Jr. recently the tight ends seem like a forgotten component in the passing game. Expect Reich to make that a focal point over the final six games.

Indy’s defense. While the game-changing turnover actually came on a kickoff return, it goes down as a defensive takeaway. The Colts have taken over the league lead in turnover margin (plus-15) and takeaways (25) and at this pace of 2.27 per game, their stated goal of 40 turnovers is within reach.

Rodrigo Blankenship. A hip injury put the kicker on injured reserve following an overtime loss at Baltimore. Indy then signed Michael Badgley, who hasn’t missed a kick in those six games. Reich made it clear last week he won’t rush back Blankenship and intends, for now, to use Badgley.

For the second straight week, the Colts came out of the game relatively healthy. The biggest concern was three-time All-Pro guard Quenton Nelson, who left in the fourth quarter after aggravating an ankle injury. Reich said Nelson is considered day to day.

30 — Indy has scored at least 30 points in five of its last six games, including 41 against the league’s No. 2 scoring defense. Reich also put 41 points on the scoreboard in that historic comeback against the Houston Oilers.

After beating one of last season’s final four teams, the Colts face another with Tom Brady and defending world champion Tampa Bay coming to town. Brady has had much success in Indianapolis during his career, and Indy needs to replicate Sunday’s performance to prove the Buffalo victory was no fluke.