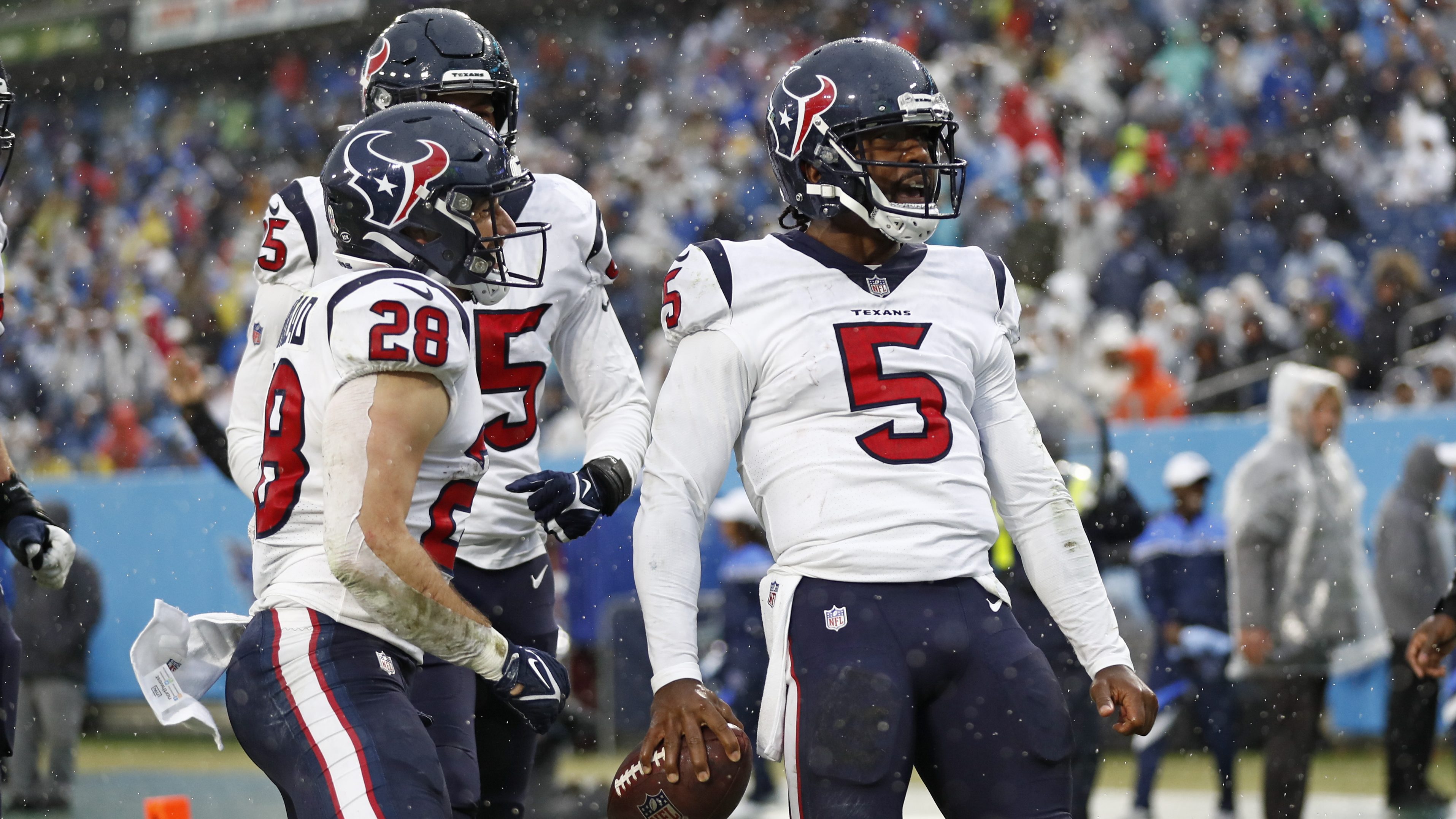 Houston Texans quarterback Tyrod Taylor (5) celebrates after scoring a touchdown against the Tennessee Titans in the first half of an NFL football game Sunday, Nov. 21, 2021, in Nashville, Tenn. (AP Photo/Wade Payne)

HOUSTON (AP) — The Houston Texans used another big defensive performance and a solid game by Tyrod Taylor to end the NFL’s longest skid with an upset of the Tennessee Titans on Sunday.

After turning over the ball four times in their previous game, the Texans didn’t have a turnover against Tennessee and forced five to get the 22-13 win over the AFC South leaders.

“When you do that … there’s a pretty good chance you’ll have a chance to win the ballgame,” coach David Culley said.

The Texans had four interceptions to tie a franchise record. Desmond King had two of the four picks to help Houston end an eight-game losing streak and get its first win since the opener on Sept. 12.

“We played together,” King said. “We did our job creating turnovers. We got five of them (Sunday) and we just helped the team get over the hump.”

Taylor bounced back after struggling in his return from a six-game injury absence in Houston’s previous game. The veteran tied a career high by throwing three interceptions in a loss to Miami before the team’s bye last week.

Against the Titans, he threw for 107 yards and ran for 28 yards and two scores to help the Texans to the win.

“It wasn’t a perfect game … so, there’s still stuff to clean up, but we’ll do that,” Taylor said. “We spoke about in the locker room, it’s a 1-0 mindset. We’ve got to continue to take it one week at a time.”

Culley raved about Taylor’s leadership and said his presence brings a confidence to his team that it missed when he was injured.

“When he goes out and he does what he did yesterday in taking care of the football and doing his job, good things happen and it goes all through the team,” he said. “Not just our offense, but with the entire team.”

Houston has 19 takeaways this season under new defensive coordinator Lovie Smith after ranking last in the NFL last season with just nine. Smith has focused on improving the Texans in this area all season and the 19 takeaways have Houston tied for fourth most in the NFL.

The Texans had 83 yards rushing Sunday and rank last in the NFL by averaging just 76.5 yards rushing a game. Rex Burkhead had his best game of the season against the Titans, running 18 times for 40 yards, but he’ll need to do more than that if Houston hopes to get going on the ground.

Sunday was the first time King had an interception since Nov. 4, 2018, against the Seahawks while with the Chargers.

DE Jonathan Greenard is questionable to play this week after missing Sunday’s game with a foot injury. … LB Jordan Jenkins injured his knee against the Titans and Culley said he expects him to be out at least two weeks and possibly longer.

5 — Houston has forced five turnovers in two straight games for the first time in franchise history, becoming the third team in the past 10 seasons to do so.

After their big win, the Texans will look to improve Sunday against the Jets as they try to win consecutive games for the first time since beating New England on Nov. 22, 2020, before getting a win over the Lions last Thanksgiving. Sunday’s game is the first of three straight at home.