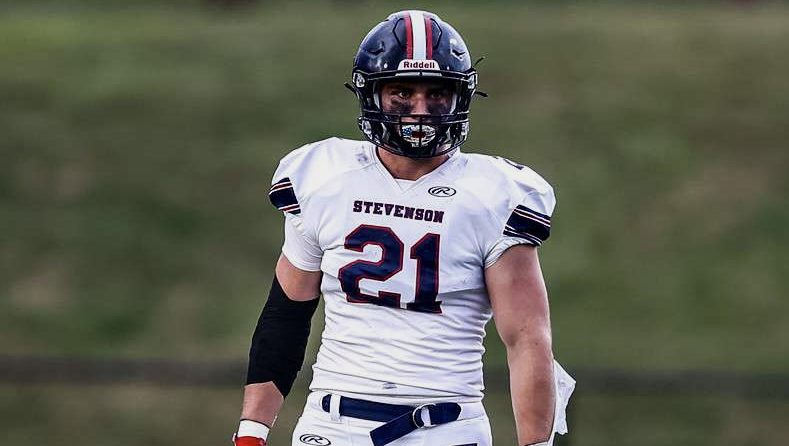 STERLING HEIGHTS, Mich. (BVM) – Sterling Heights Stevenson High School senior linebacker Jordan Kwiatkowski is making quite a name for himself. The Stevenson team captain is certainly one to watch.

During his sophomore year, Kwiatkowski started to show a range of skills. As a result, he was included in the team’s offense. Aside from serving as the Titans’ team captain, he has doubled as a power back.

The 6-foot-1, 220-pound punisher picked up a pile of awards after his junior year.

Most notably, Kwiatkowski was chosen for prestigious All-State honors by The Detroit News.

His final numbers over that shortened schedule make for a compelling case. He posted 92 tackles and blocked a number of kicks for the special teams unit.

Beyond that, he topped 1,000 yards rushing with 13 touchdowns on the ground. Altogether he tallied 1,314 total yards on offense and even became a reliable option as a receiver.

In recognition, he received numerous NCAA Division I scholarship offers. The Stevenson star was recruited by Air Force, Cincinnati, Eastern Michigan and Syracuse, among others.

Kwiatkowski committed to Central Michigan University in early June. He will concentrate on defense to begin with. Yet the CMU commit could still be utilized on offense at some point. But he’s looking to get involved right away and hopes to contribute from the start.

A closer look reveals why this three-star recruit has been so successful.

He’s a high-motor type of player and exhibits extraordinary intensity. Kwiatkowski surely does not shy away from contact, in fact it’s exactly the opposite. He brings a gritty and physical style of play.

The multi-dimensional defender has proven to be a dangerous weapon on the blitz. In essence, he’s a well-rounded talent with the versatility to make a myriad plays in various ways.

Those talents are amplified by his advanced on-field acumen. What’s more, the Michigan native also exudes a natural leadership quality.

Kwiatkowski surpassed the all-time Stevenson school mark for career tackles earlier this month. He finished the year with 136 tackles and nine sacks. On the offensive side, he recorded 172 rushes for 1,335 yards and 16 touchdowns.

The fourth-year Titan added 23 receptions for 454 yards and one receiving touchdown. The Titans closed out their 2021 season with a 10-3 record. He showed a marked increase in just about every statistical category from last year.

Interestingly, football runs in the family. Jordan’s older brother, Brandon, is currently a standout senior and defensive back for Adrian College. Needless to say, the future looks very promising.