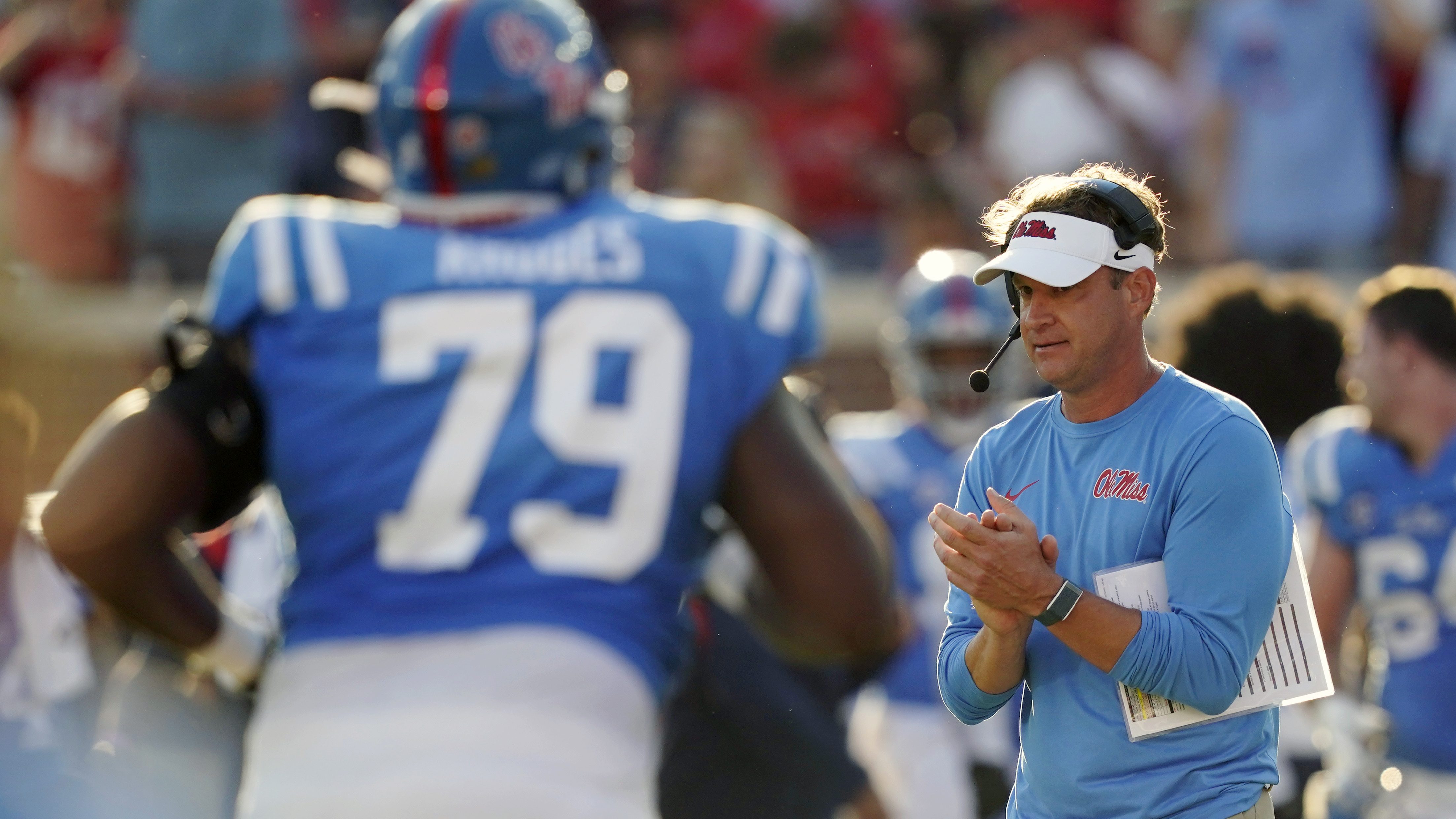 Mississippi head coach Lane Kiffin congratulates his team as they leave the field after scoring a touchdown during the second half of an NCAA college football game against LSU in Oxford, Miss., Saturday, Oct. 23, 2021. Mississippi won 31-17. (AP Photo/Rogelio V. Solis)

Lane Kiffin took over a Mississippi program trying to regain its footing after NCAA sanctions, two coaching changes in 864 days and back to back losing seasons.

On the bright side, Kiffin had a promising young quarterback in Matt Corral.

Corral is now a potential Heisman Trophy finalist playing his final college games before heading to the NFL. It’s been quite the turnaround in Oxford, Mississippi, and Kiffin gives much of the credit to his quarterback’s influence.

“I get a lot of the credit for coming in here and what’s happened and the wins and losses and all that stuff compared to where it was before,” Kiffin said. “I would argue that he deserves more credit than me for that as the head coach versus the quarterback, because the guy is there when I’m not even there in summer workouts and 6 a.m. workouts and all that.

“I think he’s had a lot to do with changing the mindset of people around here. I think we’ve helped him with that. I think he kind of has taken over or us.”

Regardless, it’s hard to argue with the results in Kiffin’s second season.

Hired in December 2019 for $16.2 million over four years, Kiffin proclaimed: “We came here to be great.”

If though the Rebels haven’t attained greatness — or even sustained success yet — they’ve become quite good fast. Especially for a program whose last winning season had come in 2015.

Corral has been a major reason, following up on a season when he led the nation in total offense. He has passed for 3,105 yards with 19 touchdowns and three interceptions despite an injury-riddled receiving corps. Corral has also run for 552 yards and 10 scores.

He also took over the tough love responsibilities in the locker room after a lackluster win over Vanderbilt from Kiffin.

Said Kiffin: “I got there and he was basically doing what I wanted to do and ripping them up and down saying, ‘Don’t you guys dare go out tonight, don’t do anything. That’s embarrassing, how were playing. That can’t happen any more because if we do we’re going to get our ass kicked next week.'”

Ole Miss went unbeaten at Vaught-Hemingway Stadium for the first time since 1992, and its only blemishes have been losses to No. 3 Alabama and Auburn.

“We came a long way since my first year,” said defensive end Sam Williams, who has a school-record 10.5 sacks.

Kiffin went 5-5 in his pandemic-shortened first season, finishing with an Outback Bowl win over Indiana. The offense was prolific and the defense among the nation’s worst, twice losing despite scoring 48 points.

The offense has still been among the SEC’s best despite the injuries. The defense has gotten a boost from the return of super seniors like Williams and transfers like defensive backs Jake Springer (Navy), Otis Reese (Georgia) and linebacker Chance Campbell (Maryland).

Only three FBS defenses have produced a bigger drop in points allowed per game, down 12.9 from last season.

“I’m a defensive guy, and last year was one of those years where I wanted to throw up after every game,” said Harry Harrison, an All-America safety for Ole Miss in the 1970s and the school’s radio color commentator. “This year we’ve gotten better. We’ve turned the corner in spots and looked good. (Texas) A&M was a special night defensively.”

The Rebels’ 29-19 win over No. 14 Texas A&M was one of their biggest under Kiffin. The former Florida Atlantic, USC and Tennessee head coach was hired after Ole Miss fired Matt Luke, who was 15-21 in three seasons.

Luke’s firing was only part of the program’s recent turmoil.

Ole Miss had been forced to vacate 33 wins over six seasons because of NCAA infractions under Houston Nutt and Hugh Freeze, with some self-imposed scholarship reductions.

Freeze resigned a few weeks before preseason camp in July 2017 after personal misconduct, ending a five-year tenure that included a Sugar Bowl win to cap a 10-3 season in 2015.

Enter Kiffin, a straight-talking offensive whiz with a penchant for quips, frequent Tweets and an up and down career.

The results so far have been strong and Williams & Co. are hoping for still more this season.

“It’s been a crazy year,” the Rebels’ top pass rusher said. “We have a chance to win out, 10-2. It’s just an opportunity and I feeel like when you give the guys like we have this year opportunity, we’re going to take it every time. Every time.” ___