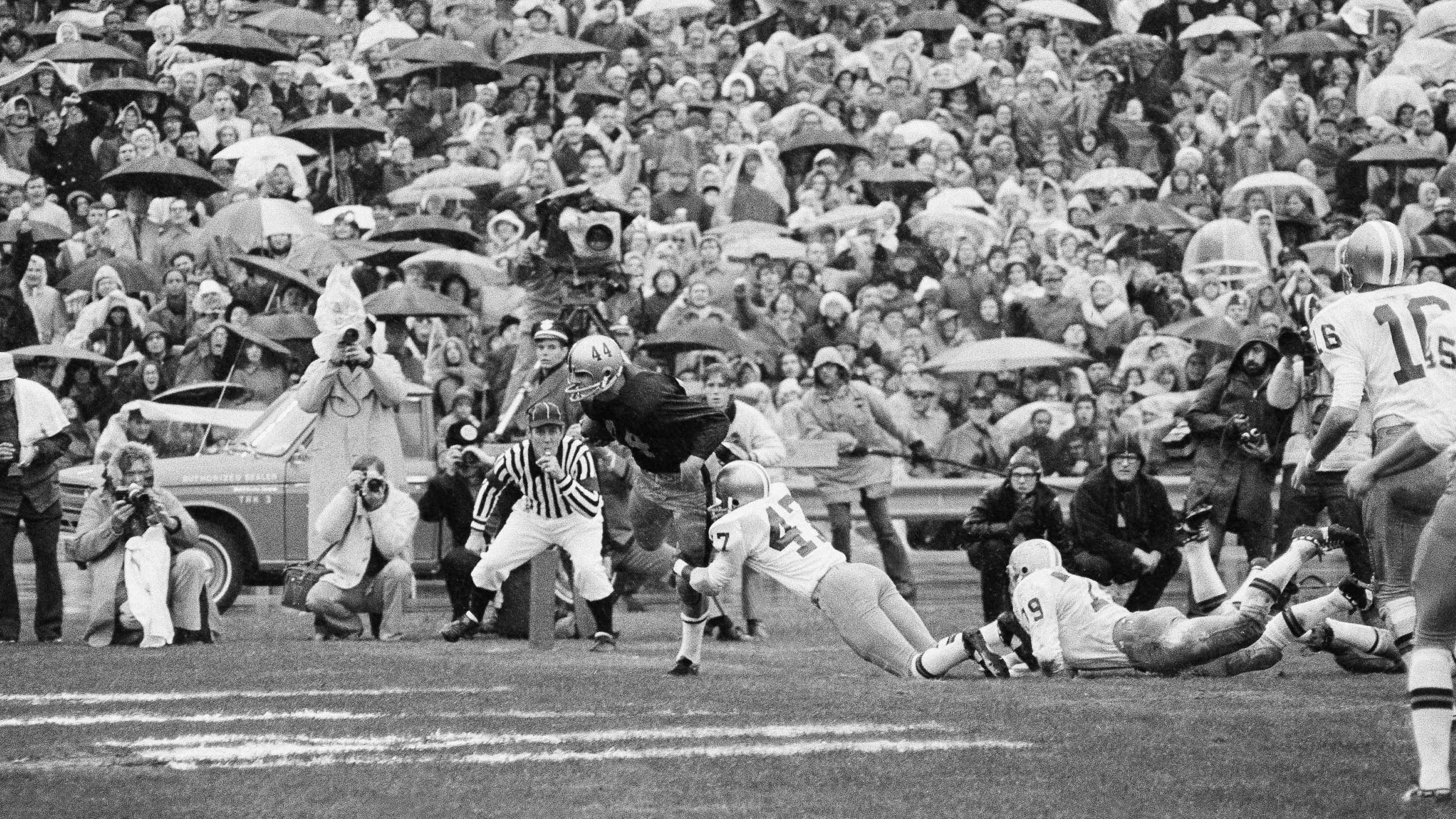 Army back Bob Hines (44) goes over for one of Army's touchdowns as Navy's Charlie Robinson (47) tries to stop him in the first quarter of a rain-soaked game before nearly 100, 000 spectators, Saturday, Nov. 27, 1971, at Philadelphia's John F. Kennedy. The rivalry game is in many ways the purest form of college football. A game with built-in stakes regardless of circumstances. (AP Photo/File)

Being an Army football fan is a little like living in time capsule.

Home games kickoff at noon at Michie Stadium. The Black Knights will be running an offense that was groundbreaking in 1970. They have no conference affiliation, and no matter what happens throughout the season, success or failure will be defined by the result of the rivalry game against Navy.

The evolution of college football has gone into overdrive the past three decades, both on the field and off. What was once a regional sport has gone national. The powerhouse programs have nearly all consolidated in various conferences, often with little regard for geography or tradition.

The rivalry game is in many ways the purest form of college football. A game with built-in stakes regardless of circumstances. But rivalry games that used to be — should be — destinations unto themselves now feel like just another step on the road to a greater goal.

Take the two best college football rivalries, according to a new survey of writers and sportscasters taken by The Associated Press.

On Saturday, No. 3 Alabama faces Auburn in the Iron Bowl and No. 2 Ohio State visits No. 6 Michigan in the 117th edition of The Game.

Even with a loss, the Crimson Tide will play the following Saturday against No. 1 Georgia for the Southeastern Conference title and a chance to go to the College Football Playoff.

The winner of Buckeyes-Wolverines moves on to the Big Ten title game. Win that, too, and it’s on to the playoff.

Sure, there are plenty of rivalry games that will be played over the Thanksgiving weekend that have only modest stakes attached beyond bragging rights. Still, the fact that this has now been branded Rivalry Week makes the whole thing feel less organic.

Has modern college football diminished the importance of rivalry games?

“USC-UCLA is a great example,” he said. “You have to be maybe a little bit older because that game’s been off the radar, but those teams get on the field together, there’s still people that think back to when that game decided everything.”

Herbstreit’s son, Zak, is a walk-on at Ohio State and is plenty familiar with the Ohio State-Michigan rivalry. Still, Kirk Herbstreit said his son only now is getting a true taste of the intensity.

“He texted me last night, this was a Sunday night, and his text was: ‘Man, do I have a whole new appreciation for this rivalry,’” he said.

There is a lot going on, too, from conference realignment and playoff expansion to the red-hot transfer portal and the newfound OK for college athlets to earn money based on their fame.

“All this stuff that’s out there, I think it’s up to the coaches to still make these rivalries special,” Herbstreit said.

Ohio State has dominated Michigan for the last decade and a half, winning 15 of 16 and the last eight. The Buckeyes are among a handful of programs, along with Alabama, Clemson, Georgia, Oklahoma and a few others, that annually operate under national-championship-or-bust expectations.

“I just think you’re one loss away from taking a rival for granted and getting a quick reminder about why this is what it is,” Herbstreit said.

Which bring us back to Army-Navy, No. 3 in the AP ranking of best college football rivalries.

There was a time, back in the days of grainy newsreels, Army-Navy games could determine national championships, Those days are never coming back.

While the importance of other rivalry games rises and falls with the fortunes of the programs that play in them —- remember when Miami-Florida State was a bigger deal than the Iron Bowl? —- Army-Navy is a constant.

The one rivalry game left in college football that still truly defines the season for each team.