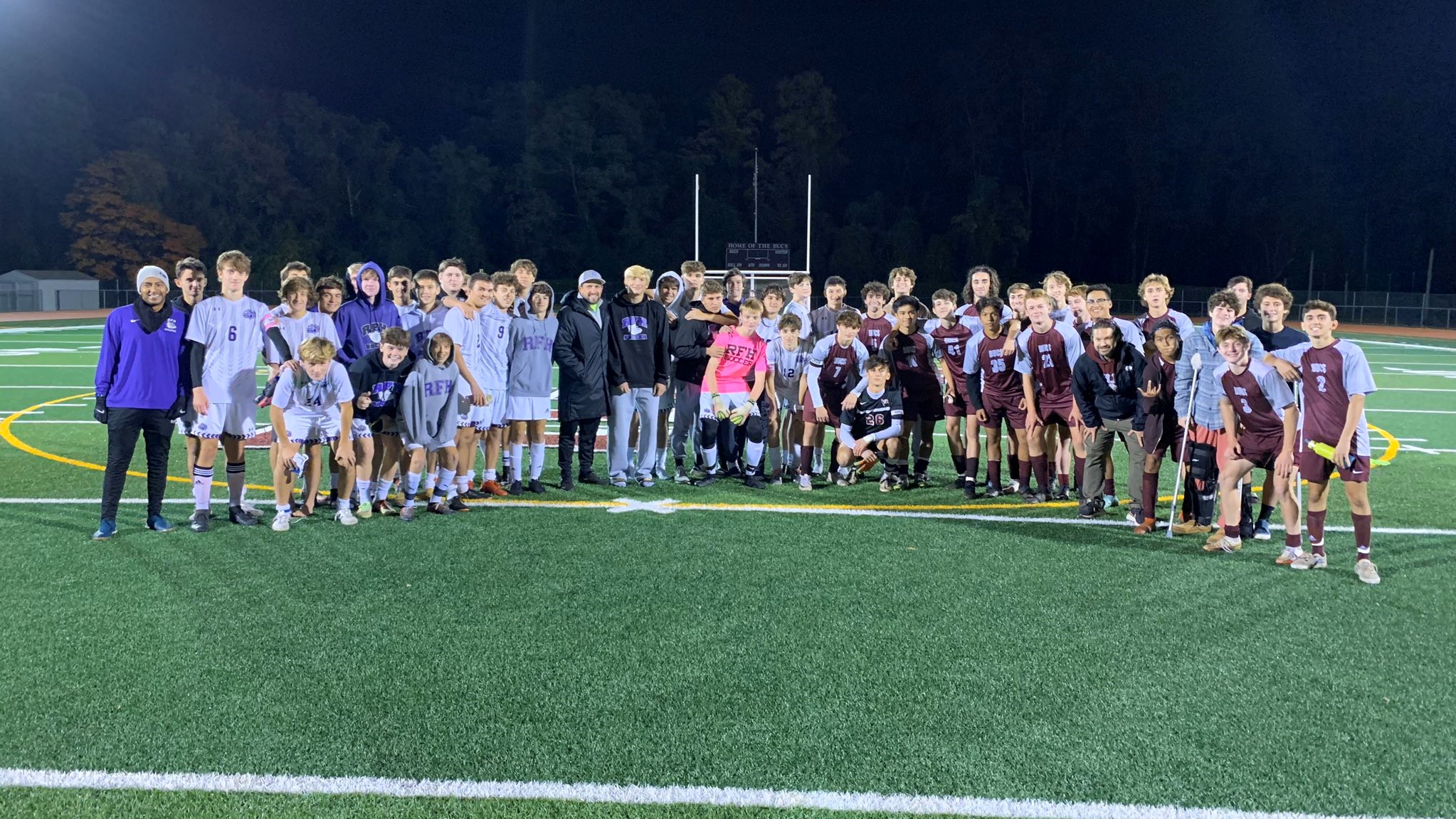 RUMSON, N.J — The Rumson-Fair Haven boys soccer team had an incredible season. The third-seeded team beat rival Holmdel 2-1 in the Central Jersey Group 2 Finals. The win lifted them to their first sectional title in school history and set them up to play in the Group 2 state semifinals against Delran High School.

In just three seasons, Coach Jeff Soares has led the Bulldogs to new heights. Soares took over after the 2018 season when the Bulldogs were a dismal 1-14-1. He made an immediate impact his first year, coaching the team to 9-6-3 and finishing third in the division. In his second season, they finished second in the conference at 7-5-2.

Soares spent 10 years as an assistant coach at Ocean Township High School, training under mentor Tom Reilly, who was also his coach. He credits that experience as the reason for being able to turn the Rumson-Fair Haven program around so quickly.

“I had good tutelage from Coach Reilly,” Soares said. “I learned everything I do from Reilly. I contact him with questions. He’s always been there for me.”

At the start of this season, the team dealt with injuries, putting them on shaky ground.  Senior center midfielder Antonio Santos had to have hernia surgery. Just as he was coming back, the other senior center midfielder, Luke Pentikis, went down against Middletown North, sidelining him for nearly the entire season.

“Antonio stepped right in and filled the void, but I was itching to get them on the field together,” Soares said.

Pentikis and Santos didn’t play a full game together until the Shore Conference Tournament opener versus Ranney. Pentikis was ready though, recording a hat trick and an assist in his return to the pitch. Santos also added a goal. According to Soares, Pentikis did everything he could.

“He expedited his physical therapy, leaving school early every day to try to get healthy,” he said. “This was his senior year and he wanted to give his all to his teammates.”

Soares highlighted how all his players are fierce competitors.

“My big thing is developing a culture,” he said. “They’re going to be dogs. They’ll fight for each other and for that family atmosphere. It’s something a lot of teams are missing.” Out of his 28 players, 21 are receiving their first varsity letter.

Fast forward to the semifinals of the NJSIAA Central Jersey Group 2 Tournament in South River. Third-seeded Rumson-Fair Haven played five games at home, but headed into battle on the road. After competing on turf fields all year, the Bulldogs faced playing on dirt. Soares knew it would be tough.

“I was worried about the opponent, but I was more worried about how my boys would react to the field,” he said. “I rented out a baseball field to get them mentally ready.”

Soares remembered Reilly making his team practice on the worst patch of grass if he knew his team was playing on a bad field.

“It’s something that I learned from him that I’m bringing over to this program,” he added. The strategy worked as the Bulldogs defeated second-seeded South River 3-0.

That victory brought the Bulldogs to the finals of the Central Jersey Group 2 Tournament.  Facing archrival Holmdel, the nail-biter went into double overtime. In the second overtime, junior forward, Alec Pentikis, got the ball on the right wing to score the golden goal, clearing the arms of 6-foot-4 Holmdel goalkeeper, Tommy Chyzowych. The team avoided a penalty kick-shootout and Rumson-Fair Haven secured their first NJSIAA Sectional Championship.

“When we played Holmdel early in the year and we beat them for the first time since 2016, I knew we had something special,” Soares said. “They had won the division outright, I’m not sure how many years in a row. I knew we could win this division and that was awesome to see.”

The victory over Holmdel carried Rumson-Fair Haven to the NJSIAA Group Tournament semifinal round for Group 2 where they faced powerhouse Delran. Their storybook season ended there with a 6-2 loss.

The Pentikis brothers played their final game together, but Luke is passing the baton on to his younger brother.  Each has been awarded first team All- Monmouth County, and 1st and 2nd team All-Central Jersey.

“A lot of teams had a game plan against Luke this year and left Alec able to do what he wanted, but next year he’s going to be the guy everyone is going to scout so it will be a little more difficult for him,” Soares said. “But I think he has a good enough team around him that he’ll still be successful.”

Although Delran ended the Bulldogs’ spectacular run, the program hopes to build on its success.

“This run in the state tournament was nuts,” Soares said. “Almost every game was at home, it was electric. Close to 1,000 people were at our games and the kids fully embraced the environment which was awesome. I want to make a name for ourselves in the Shore Conference. Of course, I want to win the sectional again too.”