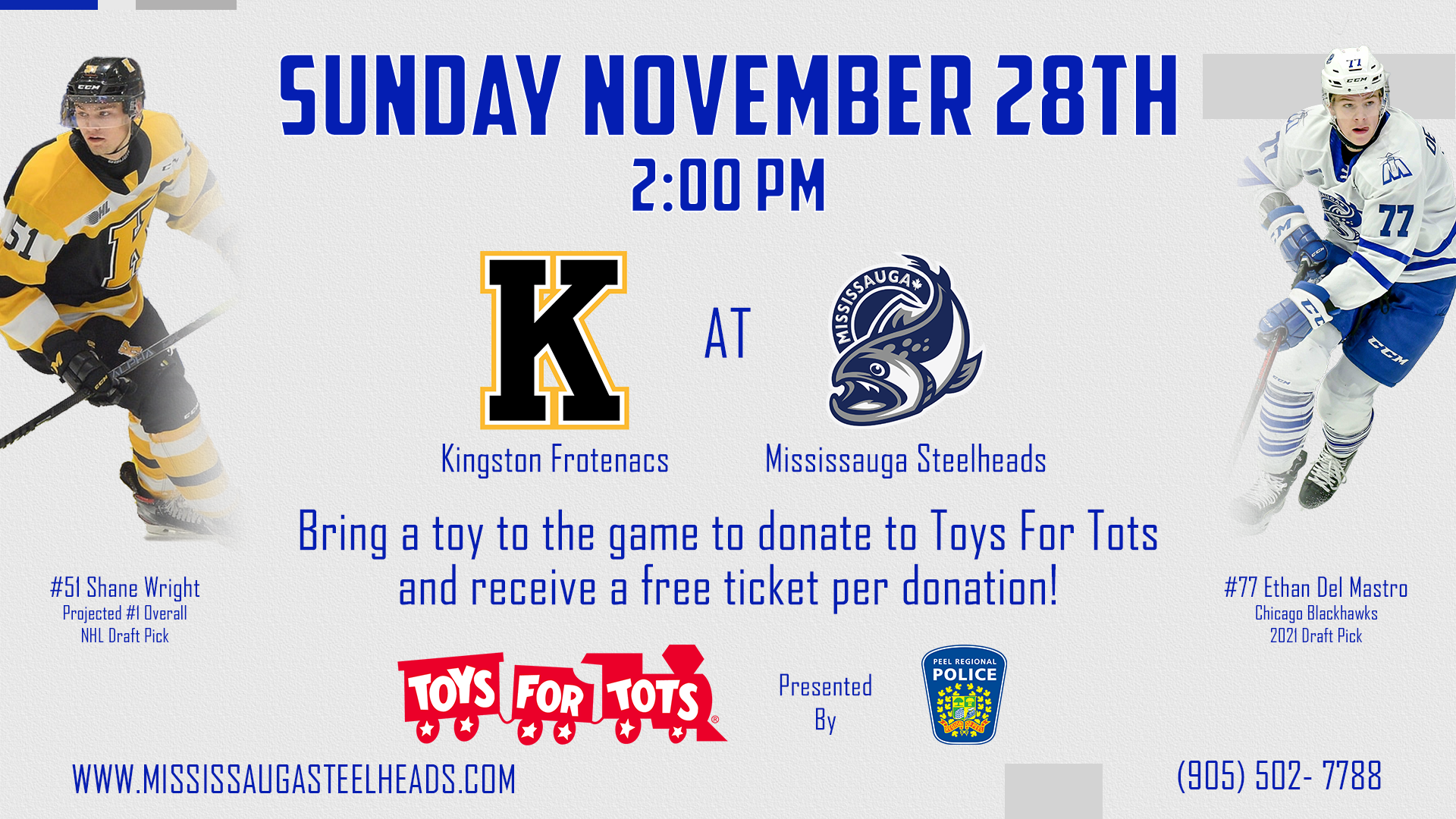 MISSISSAUGA, ON – With the holiday season just around the corner, the Mississauga Steelheads will be hosting their annual Toys For Tots game on Sunday, November 28 at 2 PM when they take on Shane Wright and the Kingston Frontenacs. The hockey club is once again proud to work alongside the Peel Regional Police and the Salvation Army to help make a difference for families in need over the holidays. Last season, fans showed their generosity when over 375 toys were donated to the cause.

Constable Jana Marchese, Toys for Tots Chair, commented on behalf of the campaign. “It’s kindness and generosity that makes the Toys for Tots program alive. It gives it the fuel that is needed to help us put smiles on children’s faces during Christmas who may not otherwise be so fortunate. Every donation is equally important and counts towards the success of this campaign. The Mississauga Steelheads have supported Toys for Tots and hosted games in our honour for many years. We are very thankful for their continuous support and partnership each year. Your dedication to Toys for Tots is something we cherish.”

The Steelheads, Peel Regional Police and the Salvation Army encourage all fans attending the game to support the toy drive by bringing an unwrapped gift or giving a cash donation to the kiosk located at the main gates.Fans will receive a complimentary ticket to a future Steelheads game and 10% of the merchandise shop with a donation.

Mississauga will also get their first look this season at the projected number one overall pick in the 2022 NHL Draft, Shane Wright. Wright was granted “Exceptional Player Status” by Hockey Canada to be eligible for the 2019 OHL Priority Selection, which features 2003-born talents. The Burlington, Ontario native was just the fifth OHL player to receive the distinction following John Tavares (Toronto Marlboros/Oshawa Generals in 2005), defenceman Aaron Ekblad (Sun County Panthers/Barrie Colts in 2011), forward Connor McDavid (Toronto Marlboros/Erie Otters in 2012), and defenceman Sean Day (Detroit Compuware/Mississauga Steelheads in 2013). Tavares, Ekblad, and McDavid were all selected first overall in their respective seasons and were later first overall picks in the NHL Draft.

The Steelheads hold a 2-0-1 record against the Frontenacs this season. The last meeting between the teams was on November 13, when the game was nationally televised on CBC. Luca DelBelBelluz leads the Steelheads in the season series with 7 points (3G,4A). Sunday’s game will be the first of four visits from the Frontenacs in the 2021-22 campaign, including a return to Paramount Fine Foods Centre on Sunday, December 12, for the 9th annual Teddy Bear Toss game.

Tickets for this Sunday’s game can be purchased online via Ticketmaster or during regular Box Office hours at the Paramount Fine Foods Centre.