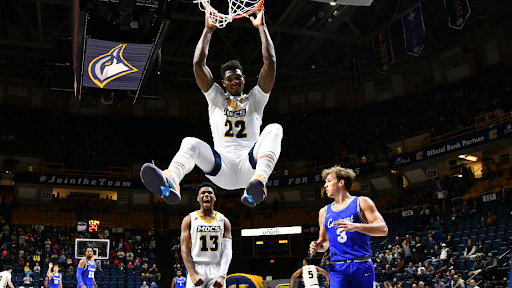 Silvio De Sousa smiles after a monster dunk, much to the delight of Malachi Smith. (Courtesy @GoMocsMBB)

CHATTANOOGA, Tenn. (BVM) – The University of Tennessee-Chattanooga men’s basketball team is off to a blazing 5-0 start, including two really impressive road wins against Loyola Marymount and VCU during that stretch.

Some might say this success is expected after building on last year’s potential and returning the stellar backcourt of Malachi Smith and David Jean-Baptiste. A statement like that wouldn’t be totally incorrect. Smith and Jean-Baptiste are still leading the way for the Mocs, scoring 16 and 15 points per game respectively, while still locking down on the defensive end.

On its face, it’s just more of the same for UTC. But what that doesn’t tell is the improvements and tweaks the Mocs have made on the margins that have earned them their unblemished resumé in the early goings.

Obviously, the addition of former five-star recruit and Kansas transfer, Silvio De Sousa, has been a boost. He’s averaging a solid 10 points and six rebounds per game. However, individual stats are not where he’s made his mark. De Sousa’s energy has been his biggest positive since arriving in Chattanooga. Against VCU, his intensity completely changed the game. He was fighting for loose balls and saving possessions by tipping out long rebounds — all the work that makes you sweat, but doesn’t show up in the box score.

And while De Sousa may not be getting the individual accolades he deserves, his effort is borne out in the team’s overall numbers. Last season, the Mocs averaged 33 rebounds per game and were actually outrebounded by their opponents on a per-game basis. This season, they are averaging 40 rebounds per game and are snagging 10 more boards per game than the opposing team. That’s a massive swing that UTC can point to as a reason for their hot start.

Another place where the UTC has improved is on the defensive side of the ball. They’re giving up a stout 52 points per game through five games, compared to 69 points per game last year. Sure, a 100-39 win against Covenant College may have bolstered that number, still the point remains, if one took out that lopsided victory UTC is still only allowing 56 points a game. If the Mocs are still hovering around this number in a month it will be an encouraging sign for their aspirations come March.

Even with these improvements, the Mocs can still get a lot better. Sharpshooter AJ Caldwell is yet to catch fire, De Sousa is easing into his new team, and head coach Lamont Paris is still toying with new lineup combinations.

UTC currently has nine guys in its rotation. Sophomore guard Jamaal Walker has yet to play due to injury. Once he returns that will make 10 players all vying for minutes. As the season progresses, rotations will get shorter and playing time will become a premium. How Paris satisfies all the mouths that want to be fed will be a dynamic to keep an eye on going forward.

There’s no denying it, the Mocs look legit. They pass the eye test and seem to be getting better with each game. It’s just five games, though. Early season success is many times a mirage. Luckily, the team will be put to the test real soon. December is shaping up to be a brutal one for UTC. In the final calendar month, they’ll face off against Lipscomb, Belmont, Murray State, and MTSU, all before starting conference play on Dec. 30.

If the Mocs are still standing when the snow and wrapping paper from Christmas settles it will be time to start talking about them as a real threat — a team no one will want to see, regardless of the name on the jersey.