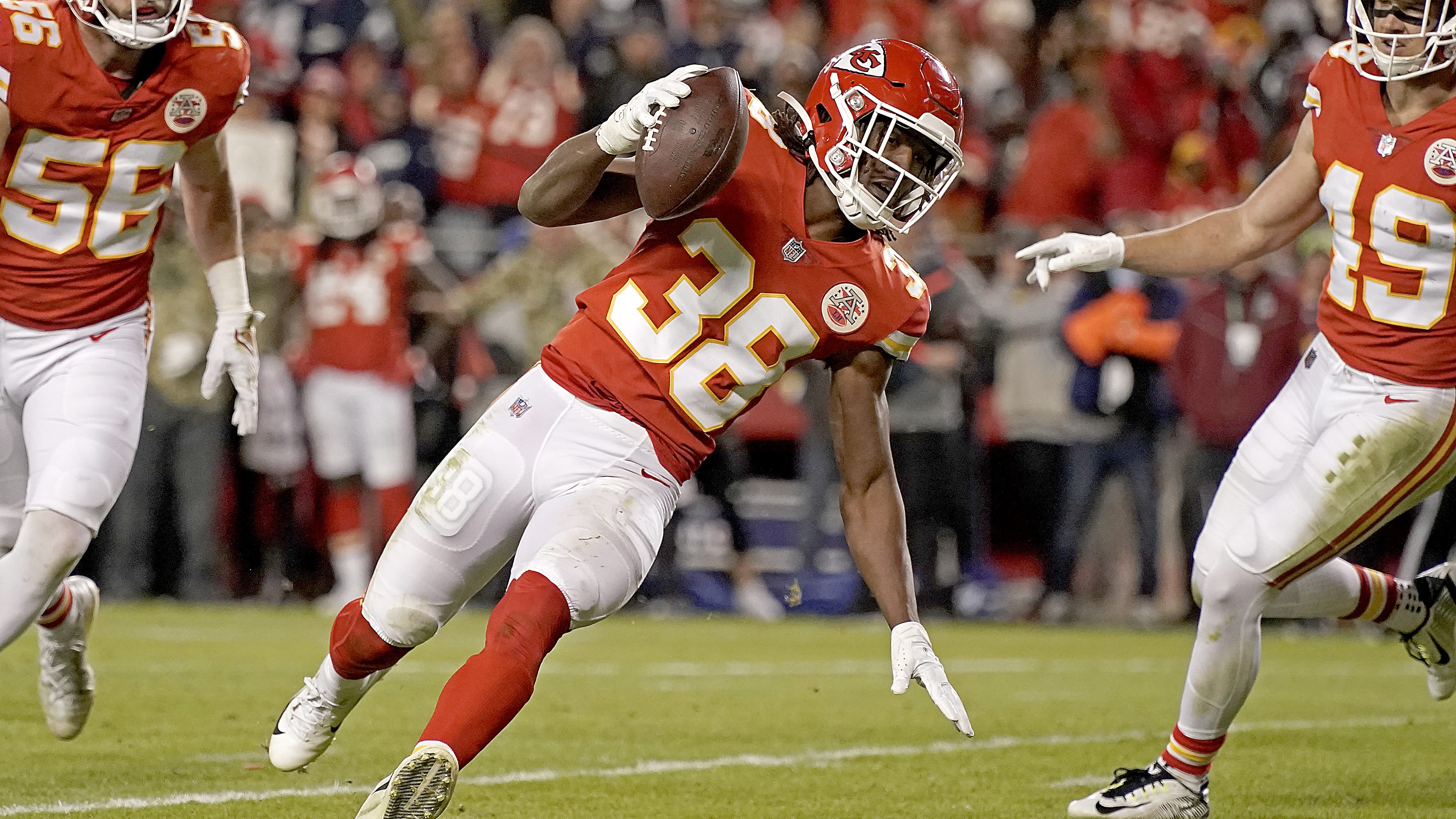 Kansas City Chiefs cornerback L'Jarius Sneed (38) runs the ball after catching an interception late in the second half of an NFL football game against the Dallas Cowboys, Sunday, Nov. 21, 2021, in Kansas City, Mo. The Chiefs won 19-9. (AP Photo/Charlie Riedel)

KANSAS CITY, Mo. (AP) — Even the mind of Kansas City Chiefs coach Andy Reid, whose ability to put on blinders and focus only on the future is downright legendary, can find its way back to a season that looked remarkably like this one.

It was only two years ago.

You know, when the Chiefs won the Super Bowl?

That year began with then-new defensive coordinator Steve Spagnuolo trying to implement a wholesale change in scheme, resulting in a bunch that was bad the previous year under Bob Sutton and just may have been worse. Throw in a whole bunch of injuries, including one to Patrick Mahomes, and the result was a decidedly un-championship-like 6-4 start to the year.

That was the same record the Chiefs had through the first 10 weeks this season.

It also was produced by a defense that was historically inept for the first eight weeks of the season, and injuries to such big names as Chris Jones, Frank Clark and Clyde Edwards-Helaire that hampered the Chiefs on both sides of the ball.

“I wouldn’t say specifically that I’ve brought it up,” Reid said. “I understand that, but you spend so much time focusing on getting yourself ready to play that those things don’t necessarily have an impact. It does in the big picture, but when you’re getting ready to play a good football team, you spend every minute trying to get the scheme down and get their scheme down and then understand their players. It’s endless hours on that, trying to get that done.”

Reid should have some time to ponder such comparisons during the Chiefs bye this week.

It probably would give him a whole lot of confidence in what lies ahead.

Back in 2019, the Chiefs ran the table after their mediocre start, relying on a defense that adapted to Spagnuolo’s system and an offense that had a healthy Mahomes. They won their last game before their bye, which also came in Week 12, and began their torrid run to the playoffs by beating up the AFC West-rival Raiders after the break.

This year’s version of the Chiefs also turned things around on defense. They have held four straight opponents to 301 yards or fewer, coinciding with a season-changing four-game win streak. And they played easily their best game of the season against the NFL’s top-ranked offense in a 19-9 win over the Cowboys last week.

Dallas turned the ball over three times and managed just 276 yards in a game that was always in Kansas City’s control.

“It got lost because the offense wasn’t playing very well, that we were winning games because of the defense,” Mahomes said. “People were so used to our offense kind of going out there and putting up these numbers, but I would say it every week when I was right here at the podium, don’t lose how good our defense is playing.”

Now the trick is to keep playing that way.

The defense in 2019 managed to do it, holding three of its five opponents after the bye to fewer than 300 yards. It held the Titans to 295 yards in the AFC title game to usher the Chiefs to their first Super Bowl since 1971, then was strong enough to allow Kansas City to mount a comeback against the 49ers.

There’s every reason to believe this year’s bunch can do it, too. They have more talent top to bottom than the 2019 defense did, particularly since the arrival of pass rusher Melvin Ingram. His work opposite Frank Clark on the defensive line has allowed Chris Jones to move back to his more natural position at defensive tackle, and he’s made life miserable for opposing quarters; he had 3 1/2 sacks, forced a fumble and recovered one against the Cowboys last weekend.

In the linebacker group, second-round pick Nick Bolton has given the Chiefs the kind of athleticism that they’ve lacked since Derrick Johnson retired. And in the secondary, L’Jarius Sneed is playing at a Pro Bowl level at cornerback, which has freed up three-time All-Pro safety Tyrann Mathieu to freelance a bit more and cause defensive havoc.

“I’m not trying to blame it on injuries,” Spagnuolo said, “but it always feels better or seems to come together when you can have some consecutive weeks of the same guys. When you can get a volume of reps underneath your belt with the same guys, talking to the same guy — you know what I’m saying? To me, that would be the biggest thing.”

Perhaps the most encouraging part of the Chiefs’ midseason turnaround? Their high-powered offense still isn’t in sync.

Imagine what the Chiefs could do the rest of the way if Mahomes and Co. start lighting up the scoreboard again.

“We lost some games close early that we probably should have won if we found ways to finish. We took some big lumps and had some big losses that we don’t usually have here,” Mahomes said. “We kind of went back to the drawing board, went back to the fundamentals and decided to take it week by week, go through the process, trust in the coaching staff. We’re sitting here now with everything in front of us. We just have to keep that same mindset.”