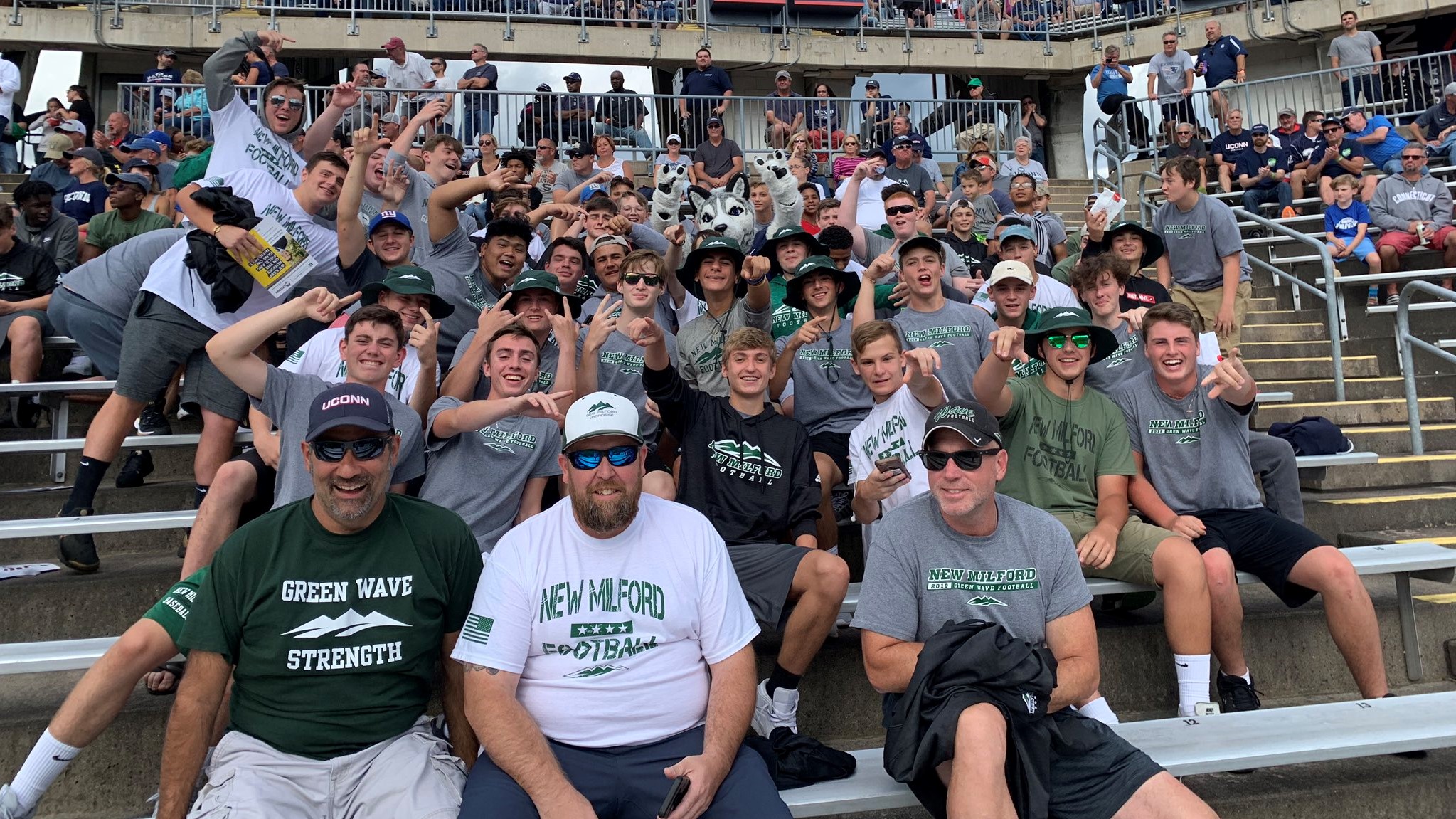 NEW MILFORD, Conn. — In his second full season as head coach of the Green Wave varsity football team, Sean Murray is guiding his squad to one of the most successful seasons in school history.

The Green Wave currently sit at 6-3 with one game remaining on their regular-season schedule, which will come against familiar foe New Fairfield.

Coach Murray’s team is peaking at the right time, having won three out of their last four games, including a dominant 27-7 victory over Brookfield last Friday. A stout defense combined with a commanding rushing attack has New Milford looking like one of the strongest teams in their league.

Murray recently spoke with BVM Sports about his team’s perseverance, if he expected to turn the program around so rapidly, playing in front of an electric home crowd and what he hopes to see in his team’s final game.

Where have you seen the most growth in your team from the beginning of the season until now?

“I would say I’ve seen the most growth in their attitude and their focus on never quitting. We’ve been down in ball games, we’ve faced adversity and they’ve never quit. They always play till the last minute and it’s really helped us take the next step here as a program.”

Does that “never quit” mindset come from player’s leadership, coach’s leadership or a combination of both?

“I’d say it’s a combination of both. I think we have a great group of kids and we have a nice group of coaches and we all work really well together. The kids know we care for them and want them to be successful and they’ve bought into that and excelled.”

There’s been a heavy emphasis on the rushing attack the last few games along with great defensive play. Is that how you envision your teams operating, or is that more adapting to your players’ skillsets?

“Like with every team, we’ve had injuries, we’ve had setbacks and had to kind of adjust on the fly like most teams do. Our defense has really stepped up this year in a lot of games. Then, the running attack the last few games has even surprised me. Noah Anderson missed the first seven/eight games with a broken collarbone, and he’s really been running hard the last few games.”

Have there been any players who’ve surprised you with their performances this season?

“I would say the defense overall as a whole. They’ve played really, really well together. We’ve never really done that here. We tend to give up some points and this year our defense has made some big plays in big situations and I think that’s a testament to how hard they worked in the offseason and how they continue to work during the season.”

After taking over the team following an 0-10 season just a few years ago and now putting together a very successful season this year, did you expect to be able to turn around the program so rapidly?

“No, I didn’t. I didn’t expect to be where we are right now so quick, especially after last year not playing. I didn’t know who was going to be back, but my players have worked really hard. It could’ve gone one of two ways, they could’ve said nah we’re not going to work too hard because who knows if we’ll have a season or let’s make the most of it, and that’s exactly what they chose to do. It’s really paid off well.”

What are you expecting from your last regular season game against New Fairfield?

“I expect the kids to play hard and give it all they’ve got. It’s going to be a tough game. Fairfield’s very good and we’re going to get their best effort. They’ve had our number here the last several years and we’re hoping to turn that around this year and get to seven wins, which would be the second-best win number here ever.”

What’s it been like playing in front of an ecstatic home crowd?

“Oh, it’s been awesome. Kind of a weird schedule for us too. We started out with four straight home games and we had great crowds at each of them. I think the kids really thrived off of it. We’ve had good crowds at our closer away games and it’s been cool to see the whole school rally around these kids and support them the way they have.”