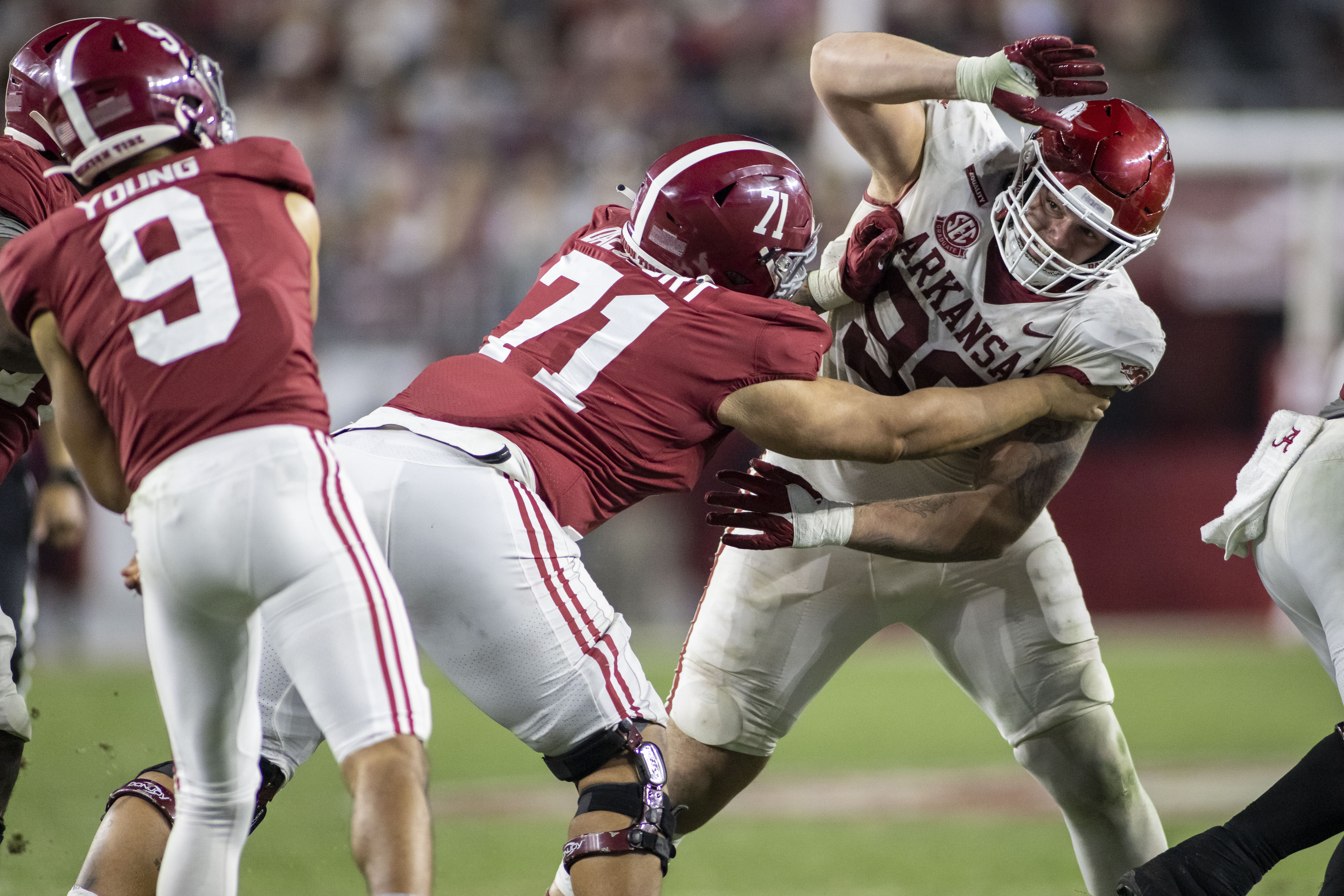 Maybe it was that heavyweight wrestling title he won in high school in Bloomington, Illinois, that caught the eye of Arkansas coach Sam Pittman, who gave defensive tackle John Ridgeway the chance of a lifetime.

An afterthought coming out of high school because of academics, Illinois State took a chance on Ridgeway and he delivered. In 30 games with the Redbirds, the imposing defensive tackle notched 102 tackles, including eight behind the line, and forced a fumble and recovered one. He also had an interception and four pass breakups, got his degree, and entered the transfer portal to test his ability at the highest level.

Ridgeway accepted an offer from the Razorbacks of the Southeastern Conference after making an eight-hour drive during the height of the pandemic to take a look at the campus.

“He’s a great kid. Once I got to know him — he likes to fish, country — I felt like maybe we’d be a fit for him,” Pittman said. “Sometimes you go in the portal and you go, man, I hope he fits in the program. Well, this kid can fit in anybody’s program. Man, has he helped us. And I loved the fact that he was a state champion heavyweight wrestler.”

Ridgeway’s dedication to excel in the classroom and on the field has made him one of the best pro defensive line prospects in college this season. He is the latest top prospect The Associated Press is spotlighting each week during the season with help from Reese’s Senior Bowl executive director and former NFL scout Jim Nagy.

“John’s made as big a jump as anyone at the defensive line position for us, one of our biggest risers overall,” Nagy said.

Ridgeway has two more games left this year — the season finale Saturday against Missouri and a bowl game.

At 6-foot-6, 320-pounds, Ridgeway has helped transform the Arkansas defensive line into a formidable force. He has 34 tackles, including two sacks among his four tackles for loss.

Ridgeway wanted to play in the season opener against Rice but wasn’t allowed to because he was coming off an appendectomy. He made his debut a week later against Texas before nearly 75,000 fans and led the defensive line with six tackles, including a sack, in a 40-21 victory that saw the Razorbacks notch 10 tackles for losses.

“The atmosphere got me really hyped,” Ridgeway said. “I wanted to show everybody on my team that I was able to play at this level and prove to myself as well that I can hang with this type of competition.”

Nagy is impressed by Ridgeway’s size, strength and agility.

“He’s really one of the only defensive linemen in this draft that has true knock-back ability at the point of attack,” Nagy said. “You see this guy come off the ball and he can lock people out, throw ’em and get to the football.

“And I always like guys with a wrestling background. He’s a really accomplished high school wrestler and you can see that in his play — natural leverage. He just knows how to position himself. He’s one of the best defensive tackles in this draft in terms of holding up double teams and recreating the line of scrimmage. He’s a big-bodied man that’s hard to move. Those guys are hard to find.”