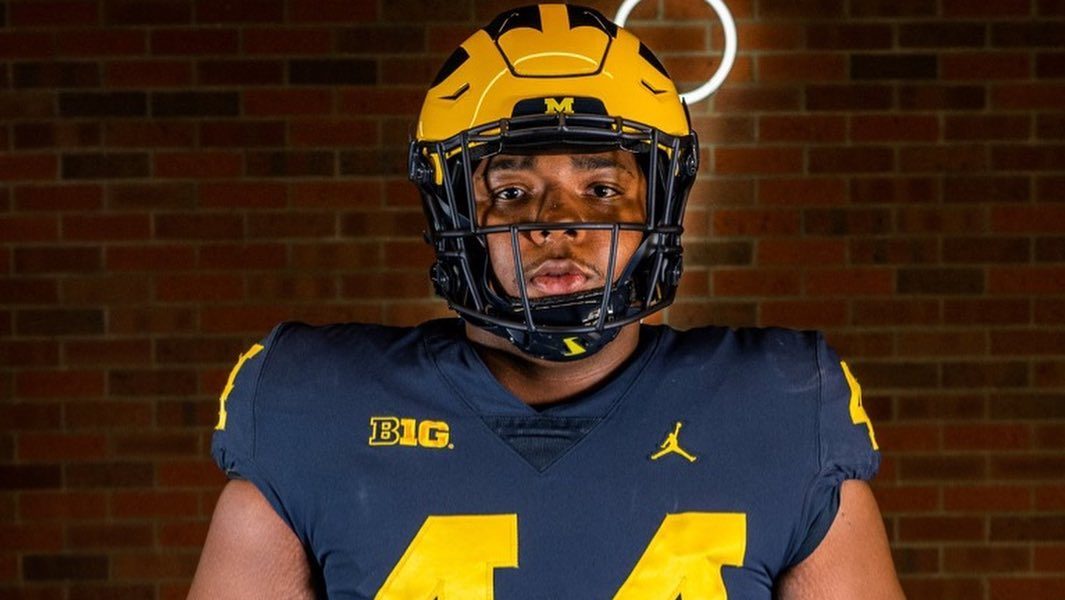 RICHMOND, Va. (BVM) — Visiting a school during its rivalry week gives prospective recruits a feel of what could be waiting for them when they come to the campus. Add a team win and that recruit could get even more enamored with the possibility of joining the program. Now, make it the first win in nearly a decade over the rival in one of the biggest contents of the entire season and the sensation to join may be overwhelming. That was the situation Benedictine College Preparatory junior defensive lineman Joel Starlings found himself in as he visited the University of Michigan during “The Game” against Ohio State University on Nov. 27 and shortly thereafter, the Class of 2023 stud committed to the program.

“It was everything I expected and then some seeing it in person,” Starlings said. “I was excited. I was pumped. It was the best experience football game wise I have been to. The campus was amazing. The students there were nice. It was great to watch.”

Starlings is one of the top players in the entire Class of 2023. According to 247Sports Composite rankings, Starlings is a four-star prospect and the No. 34 defensive lineman in the country and the No. 3 overall recruit in Virginia. In addition to his high ranking in 247Sports, Starlings is also listed in ESPN’s Jr. 300 as the No. 181 player in the class.

“I feel great, I feel relieved honestly,” Starlings said. “It’s like a big weight has been lifted. I feel more relaxed than I was before.”

As one of the top prospects in the class, Starlings unsurprisingly had a number of suitors to choose from in addition to the Wolverines. Starlings reportedly held 14 Division I offers and visited the likes of Georgia, North Carolina, South Carolina and West Virginia in addition to holding offers from Michigan State, Penn State, Ole Miss, Oregon and others.

“I felt like Michigan was the place for me when I first got the offer honestly,” Starlings said. “It’s always been a dream school of mine so just having the offer really solidified that was the spot I wanted to go to.”

Of course, being a defender at heart, Starlings had a priority on watching and evaluating each of the interested program’s defenses. When it came down to it, Starlings felt the best unit he had seen all year was the Wolverines defense in Ann Arbor. Starlings quickly seized the opportunity as he realized the role he could one day play in such a strong group.

The 6-foot-5, 310-pound defensive lineman was one of the best players for the Benedictine Cadets this season. With a five tackle, one sack performance in the semifinal round of the Virginia Independent Schools Athletic Association, Starlings helped lead Benedictine to the VISAA Division I state championship game. Though the team would fall in a 22-21 overtime thriller, Starlings was able to prove that he was one of the best in all of Virginia.

“This year I kind of honed in that role of being a leader,” Starlings said. “Just being more of a leader this year opened my eyes so I can be a good leader for next year.  … [Winning state as a senior] would mean everything. Just going there for those four years, playing with those guys and the coaches there, that last year winning state would mean everything to me because it would be the last time playing with those guys so it would be a big monument for us.”

At Michigan, Starlings will join a unit that has had a lot of success in recent years including two first round NFL draft picks since 2018 in defensive ends Rashan Gary in 2018 and Kwity Paye in this year’s draft. In addition to highly drafted defensive lineman under Jim Harbaugh, the Wolverines currently have one of the top defensive players in the country in Aidan Hutchinson who recently set the program record for sacks in a season and is getting some Heisman consideration. That potential drew in Starlings even more.

With a strong track record of recruiting and developing players, especially at the defensive line position, Michigan is a great landing spot for Starlings. Having a strong base to build on and one year left to further develop, expect big things from Starlings in the near future. While he has a couple of years before he puts on the Maize & Blue, Michigan fans can expect big things from Starlings when he officially joins the team in 2023.

“I’m not really big on individual goals,” Starlings said. “Team goals for me would be to go undefeated, win all our games, winning the Big Ten and stuff like that. … On the field, [the Wolverines] are getting a physical player that can pretty much do everything, rush the passer, stop the run and play with a lot of energy. Off the field, I’m a fun guy, like to make people laugh so hanging around me they should have a lot of fun.”