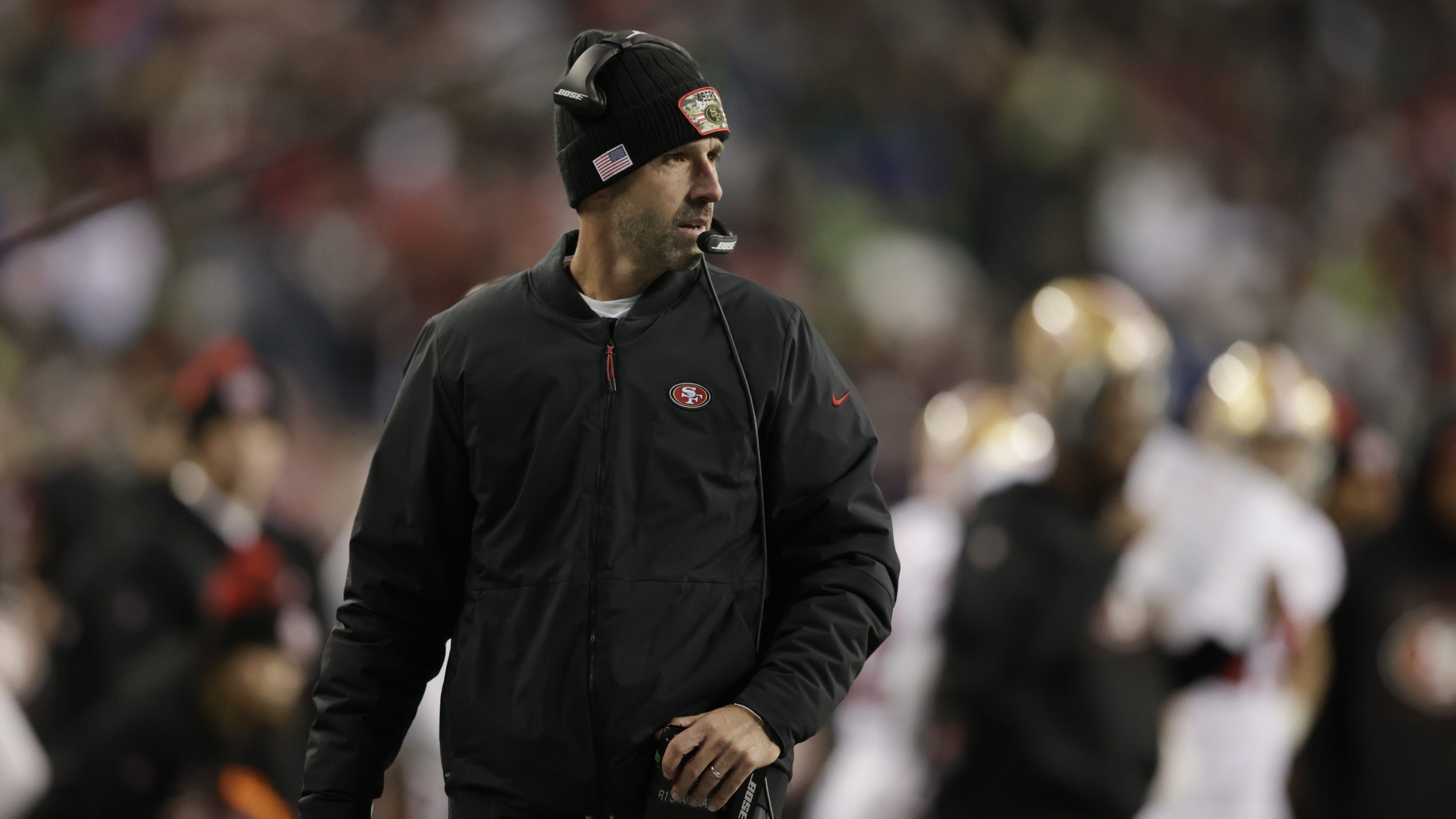 San Francisco 49ers head coach Kyle Shanahan looks from the sideline late in the second half of an NFL football game against the Seattle Seahawks, Sunday, Dec. 5, 2021, in Seattle. The Seahawks won 30-23. (AP Photo/John Froschauer)

SANTA CLARA, Calif. (AP) — The margin for error for the San Francisco 49ers is extremely thin — especially when they play the Seattle Seahawks.

So after a mistake-filled 30-23 loss on Sunday ended with Jimmy Garoppolo throwing back-to-back incomplete passes to Trent Sherfield following a 95-yard drive, the Niners can’t afford many more slipups down the stretch.

“We shouldn’t have let it get to that point, but that’s stuff you have to live with,” coach Kyle Shanahan said Monday about the final two passes.

Sidney Jones broke up the first pass to Sherfield to prevent the TD and then Carlos Dunlap deflected the final pass.

San Francisco (6-6) had gotten back into playoff position by winning three straight games, but weren’t able to extend that streak against Seattle thanks to a series of special teams blunders, two interceptions from Garoppolo and then the inability to finish off the last drive.

Despite all that, the Niners currently have the final wild-card spot as the seventh-place team in the NFC. But they could have created some space between themselves and the five teams within one game of them in the standings.

“We definitely blew it,” defensive end Nick Bosa said. “We knew it was going to be this type of game whenever we play them. But, we have to do a much better job of not giving the game away. We’re still in the ranks and we’re going to keep working really hard. We still have a lot of confidence in our team.”

Passes to George Kittle. With Deebo Samuel injured, Kittle was the focal point of the offense. He had nine catches for 181 yards and a career-high two touchdowns. Kittle had the third-biggest receiving day of his career and has five TD catches in five games since coming off IR, matching his career high for a season set in 2018 and 2019.

Special teams. It was a rough day for coordinator Richard Hightower’s unit starting when the Niners allowed Travis Homer to run untouched for a 73-yard TD run on a fake punt on the opening drive. Travis Benjamin also lost a fumble on the opening kick of the second half, Robbie Gould missed an extra point and San Francisco allowed a 33-yard kick return to DeeJay Dallas that helped set up a TD drive in the second quarter.

Azeez Al-Shaair. With Fred Warner and Dre Greenlaw out, Al-Shaair made the most of his opportunity as the middle linebacker and defensive signal caller. He had 16 tackles, forced a fumble near the goal line and had a half-sack.

RT Tom Compton. The fill-in for the injured Mike McGlinchey struggled in pass protection much of the game and was beaten by Carlos Dunlap for two big plays. Dunlap got past him for a sack in the end zone for a safety in the third quarter and deflected the final fourth down pass from the 3.

RB Trenton Cannon was released from the hospital and flew home Monday after a concussion in the game. … CB Emmanuel Moseley will miss several weeks with a high ankle sprain. … RB Elijah Mitchell is in concussion protocol after being cleared to return to the game on Sunday. It’s the second straight week a 49ers player was cleared to return to play by the independent neurologist only to report symptoms the following day to go into the protocol. LB Marcell Harris missed the game Sunday with the concussion. … Warner (hamstring) should return to practice Wednesday and is on target to play this week. … Samuel (groin) remains day to day and has a chance to return this week.

4. The Niners forced four fumbles in the game, their most in a game since they had five in a loss to the Seahawks on Nov. 11, 2019. The forced fumbles came from Al-Shaair, Bosa, K’Waun Williams, and D.J. Jones.

The 49ers visit Cincinnati on Sunday.