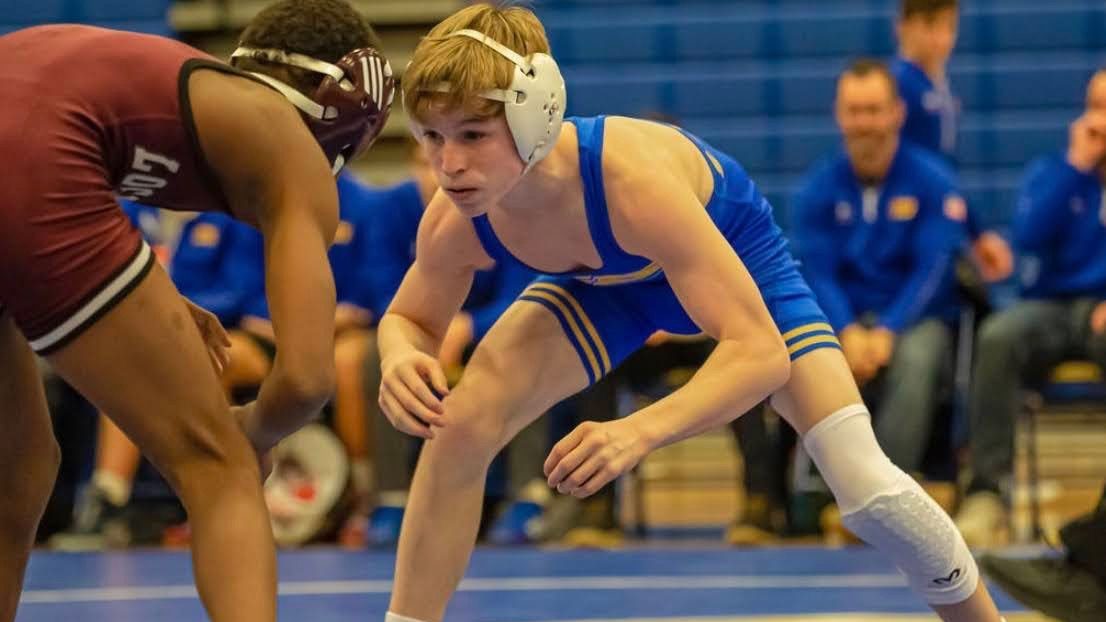 ORLAND PARK, Ill. (BVM) – Anyone who watches Carl Sandburg High School senior Sammie Hayes wrestle immediately sees his special talent on the mat. He has had a terrific prep career, and soon will become a Division I college wrestler. However, he is not the first, and likely not the last in his family to do so.

Hayes’ father wrestled in high school, and his sons have certainly followed in his footsteps. At just 4 years old, Hayes was on the mat competing with the Orland Park Pioneers. Despite being a small kid, Hayes knew wrestling was the sport for him, and that was thanks in large part to the inspiration provided by his older brother, Louie.

“Me and my brother were both really small as kids,” Sammie said. “I wasn’t going out there to play football, hockey, basketball or anything like that. When I saw my brother win a national title when he was probably about 10 years old, I figured I might as well get a jump start.”

Just a couple years into wrestling, Sammie won an Illinois state title. As he continued through his junior career, Sammie continued to do all he could to emulate his brother.

“My older brother Louie is my role model for sure,” Sammie said. “I’ve seen him go through ups and downs, but he’s always been very good at keeping his head up. Louie is, in my opinion, what every single boy my age needs in their life. Everybody needs somebody that can put a little cement in the footsteps so you have something to follow through. That’s what I was super lucky to have with Louie. He does everything right for the right reasons … he’s one of my best friends.”

However, as years go by, roles often change. Now, Sammie is having the chance to be the same kind of role model Louie is to him for his younger brother Rocco, who is also currently wrestling on the Carl Sandburg squad.

“Rocco is the best,” Sammie said. “Me and Rocco have always had a really, really close bond and I don’t think our relationship is ever going anywhere. I think I do a pretty good job stepping up as his older brother. I call him ‘the Bulldog,’ for a reason, he’s short, stocky and always ready to put up a fight and lay his heart on the line. I’m really proud of Rocco and whenever he needs something, he knows that I’m here for him.”

The tight-knit family bond in the sport produced success throughout Sammie’s youth, as he began wrestling year-round, competing in both freestyle and Greco, and winning state and national titles in both.

During his high school years, Sammie has also competed at Fargo Nationals, becoming an All-American in freestyle. At the same time, he has also shined tremendously at Carl Sandburg.

Although he was only around 93 pounds, Sammie earned a varsity spot right away as a freshman wrestling at the 106-pound weight class. Emerging through the season, the standout wrestler was able to go all the way to sectionals.

After a strong summer, Sammie came back even better as a sophomore, as did his Carl Sandburg team. This time, he would make it all the way to state, finishing as runner-up in the 106-pound weight class.

“Come state time, all of our confidence levels were through the roof, and we were really excited to just compete and try to win a state title,” Sammie mentioned. “I go into the state finals, and I’m feeling pretty confident and feeling pretty good. I’m a little nervous and a little scared being a sophomore, but I hadn’t given up one takedown the whole year.”

Unfortunately, Sammie would suffer his first takedown of the season in the third period of the championship match, resulting in the loss. However, the future for him and his teammates remained bright.

But, as the athletics world changed due to the global pandemic, the bright lights of the future dimmed a bit. Sammie and his Eagles’ teammates did eventually end up having a shortened wrestling season last spring, yet as he notes, “it just didn’t really seem legit.”

With that, more and more anticipation had built for this winter’s senior season, which has started out strong for Sammie. By the time his final go around at the high school level is finished, he could break through for his first individual state title. He also hopes his team can also get to that level.

“We’re just trying to make the most of it before we get sent away and hopefully chase that state title.” Sammie noted.

While Sammie’s high school wrestling tenure may be nearing its end, his wrestling career as a whole is far from over, as he hopes to compete in the sport as long as he can.

“One of my coaches, Mike Polz, said, ‘winning is fun,’” Sammie mentioned. “That kind of takes me a long way for my wrestling career as far as possibly going after college. If I’m winning and I’m kicking butt, winning is fun and I don’t think I’m going to want to stop the fun. I’ll be happy to wrestle as far as I can as long as everything is going smoothly.”

The next step in Sammie’s journey will begin close to home, as he will wrestle for the Northwestern Wildcats next year.

The decision to choose Northwestern came as a surprise to many, and perhaps even to Sammie himself at first. He had plenty of quality offers on the table, but with how much he idolizes his older brother, he seemed destined to land at Virginia.

“When he went to Virginia, within the next month, I probably had a whole wardrobe just full of Virginia wrestling. I guess you could say I was part of his bandwagon and just jumped on it right away. Virginia was a huge school for me, I really, really liked it. They were legit contenders for me to go there.”

Once college coaches were officially allowed to contact Sammie, one of the first calls he received came from Virginia. However, self described as a “homebody,” the 18-year-old was unsure about going that far away for college.

Deciding to continue his recruiting process, Sammie soon got a call from somewhere much closer to home: the University of Wisconsin. The wrestler seriously considered the Badgers, and continued to receive interest from additional Big Ten schools. However, he still was looking to see what his home state would have to offer.

The University of Illinois showed interest, but only offered Sammie a walk-on opportunity. As he continued another strong summer on the mat, the senior went down to Florida to train and vacation. There, he got a call from Evanston, Illinois. It was indeed Northwestern, the perfect opportunity for Sammie.

“I was excited,” Sammie said. “Northwestern is the dream, they have the academics that Virginia has, they’re close to home, they have a good team, it’s the Big Ten and great coaches, phenomenal coaches. Right then and there, I was star-struck. I couldn’t believe the situation that I was in. I was super, super happy and just praying to God that I could get an offer from them. Fast forward a couple of months, they hit me with the offer, and there was no doubt in mind. I couldn’t be more grateful for the opportunity that I have in my hands right now.”

It may not be Virginia, but Northwestern seems like the perfect fit for Sammie. Although he will not follow Louie’s footsteps this time, Sammie is already trying to get Rocco to follow in his.

“I’m hoping that he’ll be a Wildcat here in the next couple of years as well because I love having that kid by my side,” Sammie said. “It’s been awesome being teammates with him.”

Perhaps in a couple of years there will be two members of the Hayes family wrestling for the Wildcats. While Rocco and Louie often get a lot of the attention, Sammie knows the support his entire family has given him has led to his success, and he’s appreciative of them day in and day out.

“I want to shout out my mom, my dad, my brothers and sisters as well,” Sammie added.

With the support he has, Sammie is poised for big things at Northwestern. He is already locked in to what he wants to accomplish in Evanston, and is focused on doing whatever it takes to bring the Wildcats to the top.

“Seeing schools like Iowa and Penn State, they really drive me to want to be as good as I can possibly be,” Sammie said. “I want Northwestern to be right there with those schools, be even better and be that school in the Big Ten. Any way that I can contribute for that school to be as high up as they can be, I’m going to do it.”