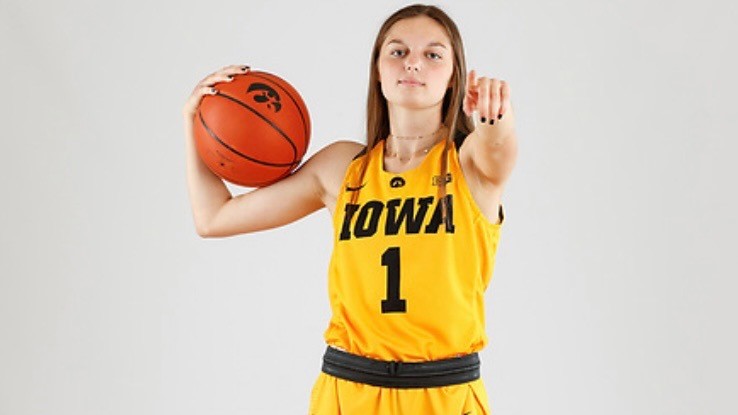 FREMONT, Neb. (BVM) — Kelly Flynn became the Fremont Tigers’ head coach in 2018. It probably couldn’t have been better timing because that was also the year that Taylor McCabe arrived at the high school.

Suffice it to say, the girls basketball program hasn’t been the same since.

“She’s been a dream,” Flynn said of McCabe. “From freshman year, she’s made a big, big impact not only on Fremont basketball but the state of Nebraska. … She’s pretty much rewritten our record books.”

The 5-foot-9 star senior guard who’s been committed to the University of Iowa since August of 2020 is approaching 2,000 points for her career. She not only holds multiple school records for steals and 3-pointers, but she’s also on her way to breaking the state record for career 3-pointers made. Brooke Kissinger set the mark in 2014 when she finished her Minden career with 363 treys. McCabe has 325 with nearly two full months of her senior season remaining.

A quick, difficult-to-guard scorer who consistently finds multiple ways to get her shot up before defenders can challenge her, McCabe will likely leave Fremont for Iowa City as the most accomplished long-range shooter in the history of Nebraska high school girls basketball.

“There are shots that she’ll practice that you’ll see somebody else shoot in a game and you’ll think they’re maybe forcing it because they maybe haven’t worked on it, but she works on those things so much,” Flynn said. “With her between-the-legs stepback, it makes her really difficult to defend because she’s got a quick first step, she can blow by, but she can also stop on a dime and pull up and shoot a jumper. I’ve had quite a few people over the years tell me that she has one of the quickest releases they’ve ever seen.”

With such talent, McCabe had no shortage of college suitors prior to committing to the Hawkeyes, as would be expected for a four-star recruit who ESPN ranks No. 89 overall among the top 100 players in the country for the Class of 2022. McCabe also considered offers from Wisconsin, Creighton, Nebraska, and several other Division I programs before deciding that Iowa was the right fit for her future.

“Iowa jumped on me pretty early on in my recruiting process so I’ve known the coaching staff for a very long time,” McCabe said. “The stability and culture within the program was an obvious plus. I like the way that they play and they really thought I would fit into their style and I wanted to go to a place where they wanted me and that was the case. I like the school and I really like the team and the coaches. Everything was so right about it.”

Flynn believes McCabe’s game will transfer quite well to the Big Ten, and not just because of her exceptional long-range shooting ability.

“She’s a great defensive player,” Flynn said. “We always put her on the (other team’s) best offensive player. She’s also a very fast runner and an extremely hard worker. She can handle the ball, so I think they can use her as a shooting guard but I think they can also have her handle the ball. She’s very good in a lot of different categories for us. I think that knowing that she’s going to be going to that next level, she’s really tried to improve her game as opposed to just being a 3-point threat.”

Even though she already holds multiple school records for steals, McCabe said she’s using her final high school season to establish herself as an even better defensive player while also trying to become a better rebounder. But individual goals aside, she also has high hopes for her team in 2022.

“We really want to win state this year,” McCabe said. “We’ve gotten further and further every single year and we came up short (in the state championship) last year by four points to a really good (Lincoln) Pius (X) team, but this year we really think it’s our chance and it’s our last chance we wanna throw everything we have at it.”

Regardless of whether or not McCabe finishes her Tigers career with a state title, she’ll undoubtedly leave Fremont with plenty to be proud of, including a bunch of records that will be hard to break.

“She’s really been special for Fremont High School,” Flynn said. “I think she’ll be a special player for Iowa as well.”