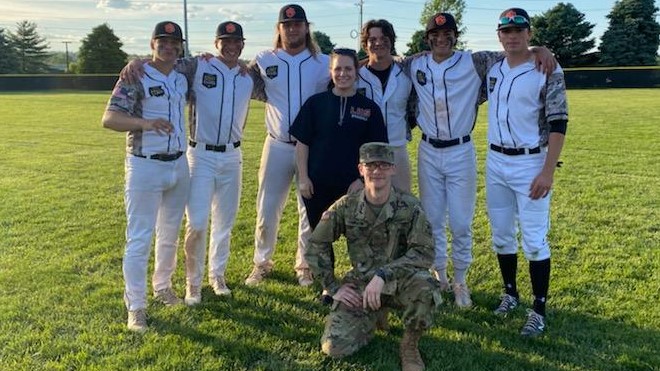 LAWRENCEBURG, Ind. — Lawrenceburg High School will begin preparing for their season soon and hope to be more competitive than they were last year.

Last season, the Lawrenceburg Tigers went 14-16 and lost to Connersville High School in the sectional semifinals of the playoffs. When I asked Lawrenceburg head baseball coach Nick Tremain about his team’s results last season, he responded with insight.

“We were competitive, but we had our first losing season in a couple of years,” he said.

A big reason for Lawrenceburg’s mediocre play last season was injuries. Only two players missed time because of COVID-19 related issues, but many players missed significant time with injuries suffered on the field. Those injuries forced Coach Tremain to call up some players from the junior varsity team and play some of his bench players.

Even though the Lawrenceburg Tigers struggled a lot last season, they still had a few impactful players. One of those players is pitcher and first baseman Drew Lanning. Lanning is a senior now and primarily pitches. Last year, he was the innings leader for the Tigers and pitched in 13 games (nine starts). He was a workhorse on the mound and pitched 47 innings. At the beginning of the season, he was very shaky, giving up 13 runs in his first three games. However, he started to gain control after that game and finished the season with a 4.32 ERA. Lanning is now committed to play college baseball at Hanover College.

Lawrenceburg’s roster has not been finalized for this season, but the team’s core of seniors, Lanning and Devin Fluhmann, and junior Nolan Verks is still intact. Fluhmann has received offers from Division III and NAIA colleges, and Verks is starting to speak with college baseball programs.

When he talks about his current roster, Coach Tremain does not mince his words.

“A lot is still to be determined,” he said. “We have some guys that are unproven at the varsity level.

Like many high school baseball programs in the basketball-crazed state of Indiana, Lawrenceburg is in a unique position. They have to figure out how to field a competitive team when more kids are drawn to the hardwood. Luckily, many students at Lawrenceburg High School play two or three different sports.

Lawrenceburg will begin practicing hopefully next week and will have their first game of the season on March 31. They are playing in a challenging conference that has produced multiple Division I baseball players. Still, Coach Tremain remains optimistic even though he is not sure who all his players will be this year.

“Our goal is to be competitive in every game we play,” he said. He plans on taking the season day by day.