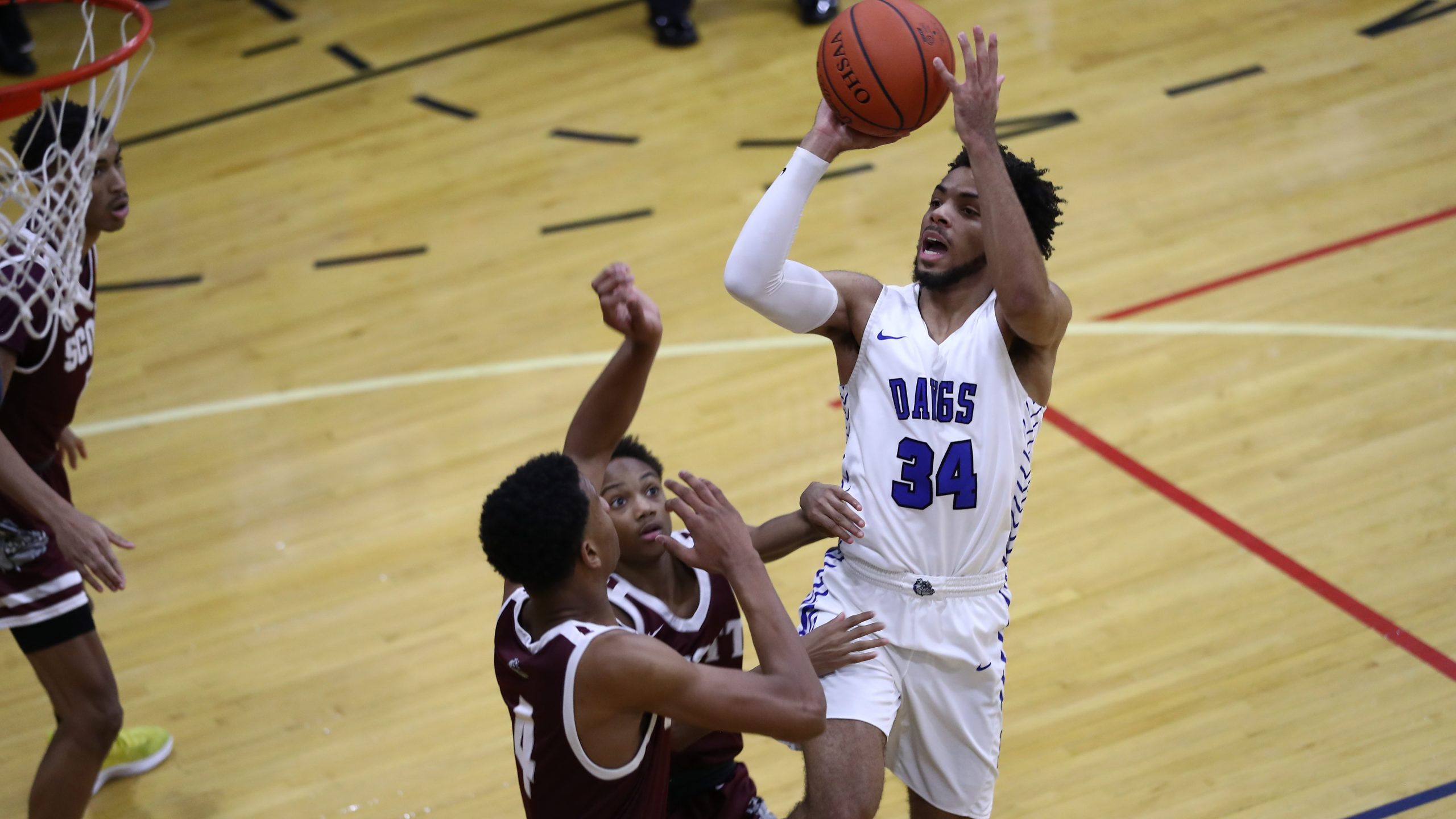 CINCINNATI (BVM) – Paul McMillan IV’s talent has never been in question. As he plays at Woodward Career Technical High School in his senior year, he is continuing to prove his dominance every time he is on the court.

Although he is concluding his final year of high school basketball, McMillan IV knows he will have a Division I college future ahead, being labeled as a top-20 point guard in the Class of 2022.

He will not be the first in his family to do so, however, as McMillan IV comes from a strong family background in the sport. It begins with his dad, a former collegiate player at Loyola Chicago and professional player who competed internationally.

“My dad actually played basketball at Loyola,” McMillan IV said. “It all started with my dad. Just to have a dad that I have who has already been through this process, the high school, college, professional process, it’s great because he knows every little thing, every little detail that I need to do and what I need to get better at to improve my game.”

Meanwhile, McMillan IV has two older sisters who were standout players in high school, with one going on to play college basketball at Bucknell. He also had an older brother who was a 1,000-point scorer in high school and was a collegiate player as well.

“Just growing up and watching them do what they do, I just fell in love with the sport, really,” McMillan IV said. “It was a family thing … Since I’ve started playing basketball, there’s never a tournament or even a high school game where my family doesn’t come. I don’t know about other people, but when you look out and you’re about to play and you see your whole family there, it gives you an extra boost of confidence to go out there and do your thing. My family has always been there.”

In part due to his family, McMillan IV has gained some of his best attributes, including his leadership abilities. But he also has gained a natural feel for the game, and a lethal shooting stroke. Growing up idolizing LeBron James, McMillan IV now also looks to incorporate parts of the games of some of the top point guards in the NBA – such as Chris Paul, Kyrie Irving, Damian Lillard and Steph Curry – into his.

However, McMillan IV has his own style, and it has led to success throughout his basketball career. Growing up, the point guard played with a couple of local teams coached by his father, and then moved on to play with All-Ohio Red, competing alongside some of the best the state has to offer.

“We had a real good team,” McMillan IV said. “We were top five in the country.”

McMillan IV continued to play with the same core during the club season, but was also prepared to star on the hardwood during his high school career.

In his freshman season, McMillan IV played at Hughes High School in Cincinnati. Although not everyone bought the hype initially, the basketball standout proved his talent right away, averaging around 25 points per game and earning player of the year honors in the Cincinnati Metro Athletic Conference – the first freshman to ever do so.

As he went into the summer, McMillan IV started considering his future. Getting to the NBA is the top goal, but after his playing career, he still wants to be set up for success, and has been interested in the real estate industry. As a result, he decided attending Woodward would be the right choice for him, academically and athletically.

“I just wanted to build the program back up to at least win 50% of our games,” McMillan IV said.

With his dazzling play, McMillan IV began garnering plenty of attention, beginning in his state, as he was named a first team All-Ohio player. However, he also began drawing the interest of several big-time college basketball programs, as well as the eye of some major high school sports media outlets such as MaxPreps.

“At a young age, I always knew I had a skill or talent for the game of basketball, but it was my sophomore year when I got MaxPreps All-American,” McMillan IV said. “I was on that list, and there are only about 30 to 40 guys in the country on that list. That’s when I really knew that my gift of playing the game of basketball is bigger than me … I knew that I could take this to the next level.”

McMillan IV’s play continued to go up a notch into his junior season, as he delivered on the high expectations he and his team had prior to the season.

“Coming into junior year, there was a lot of uncertainty with this Covid stuff,” the point guard said. “We had a lot of returning players. I already knew the chemistry was better on the court … We already had a year of experience with each other. Coming into the year, it was the same big-time expectations for myself and my team.”

Woodward went on to win its conference – doing so for the first time in 23 years – going an impressive 20-5. McMillan IV averaged 28 points, 5.1 assists and 3.9 rebounds, shooting 55% from the floor along with a remarkable 52.4% clip from beyond the arc. He was again named conference player of the year, first team all-state at the DII level and was a MaxPreps Junior All-American honorable mention player.

After the season, McMillan IV played with a couple of different clubs. But in June, a new opportunity came about: playing at prestigious Hillcrest Prep in Arizona. By the end of the month, he and his family decided that it was the right opportunity for his senior year.

McMillan IV competed at Peach Jam in July and then headed to Phoenix soon after. While he enjoyed playing there and the competitive nature of his new team, some complications on the academic side of things led to a short stay in Arizona.

“I’m not going to lie, the one-on-ones, two-on-twos, three-on-threes were competitive,” McMillan IV said. “It was a lot of smack talking and a lot of people getting angry. After we’d get done, we’re not talking to each other for a while. It was very competitive and the basketball went really well. But there were some things on the academic side that weren’t going as planned. I loved it down there … they treated me like family and still treat me like family to this day.”

By later in the fall, McMillan IV returned home to Ohio, and re-enrolled at Woodward. He and his family decided it was the best option for him not just on the basketball court, but also academically, as McMillan IV holds a 4.0 GPA and hopes to finish as valedictorian of his 2022 class.

“I ended up coming back home to Woodward and I’m glad I did it,” the senior added.

McMillan IV’s final year at Woodward has gone well both in the classroom and on the court thus far. The Bulldogs continue to look strong, and McMillan IV has continued his dominant play. While he is certainly a favorite to win Ohio Mr. Basketball or the state’s Gatorade Player of the Year award, McMillan IV has already accomplished some truly impressive feats during the campaign.

In a win over Warren Central of Indiana on Dec. 4, McMillan IV surpassed the 2,000-point scoring mark, and is believed to be the first player in Cincinnati Public School (CPS) history to do so. He has also made it onto the OHSAA’s record book for most career points, already in the top 30 with an opportunity to move up.

“Coming into high school I set these goals and the things I wanted to do, but once you achieve them, it’s like so surreal,” McMillan IV explained. “It’s still so surreal to me that I’m the first ever 2,000-point scorer in CPS history or I’m one of 30. It’s been years and years of great players playing high school basketball in Ohio and I’m one of 30 to be on the scoring list. It’s pretty crazy for me, I’m still not sure how to feel about it, honestly.”

In addition to the state awards, McMillan IV also hopes to become the first three-time Cincinnati Metro Athletic Conference Player of the Year, and wants to lead the Bulldogs to conference and state championships.

Although there is a lot of unfinished business to take care of, the senior knows his final year will go by fast. Then it will be off to college, where McMillan IV still has to make a decision.

He currently holds scholarship offers from several big time programs, including the likes of Purdue, Louisville, Ole Miss, Kansas State, Georgetown, Xavier, Dayton and Arizona State among others. While he is intrigued by many, McMillan IV has no timetable set for making a commitment, and will keep his options open until he knows it’s time.

“It’s kind of all over right now,” McMillan IV said. “I’m never going to put out a top five, top 10, top anything. Once I figure it out, I’m just going to tell people a week in advance and then commit to a school. There’s no timetable right now, I’m just trying to figure everything out.”

Wherever he ends up going, the standout guard wants to make an immediate impact and continue to build the program further. But once his time in college is done, McMillan IV has always had visions of joining the NBA. While he has excelled at every stop of his career on the hardwood so far, doing so at the highest level would be the icing on the cake.

“The ultimate goal for me is to get to the NBA,” McMillan IV said. “It’s going to take a lot of hard work and long hours, pretty much the things that I’ve been doing up until this point. It’s going to take a lot of faith and trust in God that he’s going to lead me to the right path. Trust in my dad and believing in what he says and the things that he’s teaching me. And just leaning on my family, because my family is everything for me. Once I get there, I expect to do great things. Not just go to the NBA and be in the NBA, once I get there, I want to be a franchise player, a star.”