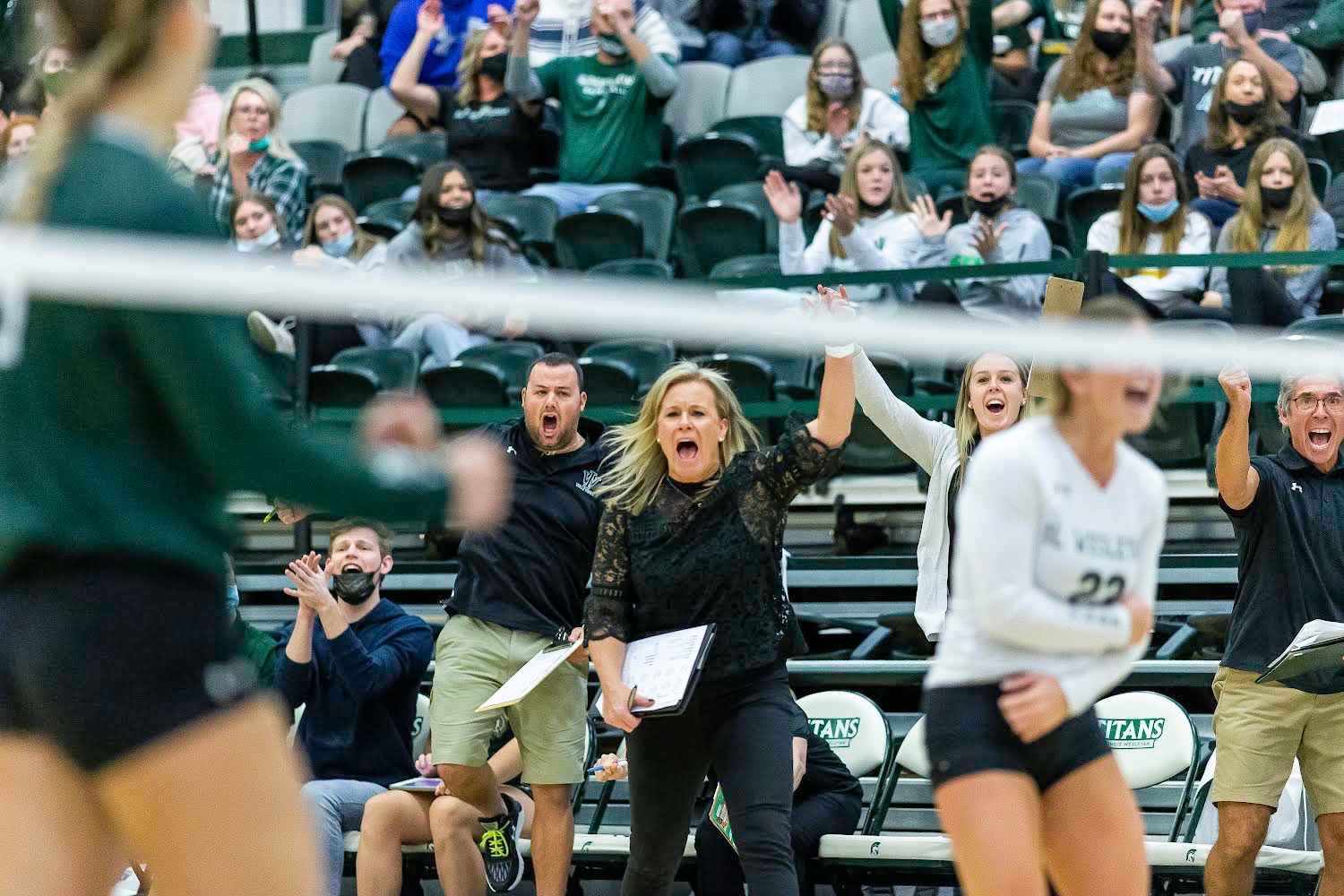 BLOOMINGTON, Ill. — Kim Nelson-Brown, Illinois Wesleyan University Head Volleyball Coach and Associate Athletic Director, celebrated her 500th win earlier this season. Get to know her and the journey behind this huge career milestone in this interview.

How long have you been coaching and what is your background in this sport?

Kim Nelson-Brown: My first team was 7th grade at Palos South Junior High. From there, I was able to play four years at Carl Sandburg High School in Orland Park, three of which were spent on the varsity team. In 1990, I signed my letter of intent to play volleyball at Illinois State University. I played collegiately from 1990 to 1993 and graduated from ISU in May of 1994. Throughout college and just after, I coached a local club team in Normal and another up in the Chicagoland area when I moved back home.

In 1994, I was the head varsity coach at Oak Forest High School. Shortly after the season, I was married and moved to Decatur. In the fall of 1995, I was the head varsity coach at Maroa-Forsyth High School. In 1996, I interviewed for the IWU position at the end of July and was officially hired in early August. I’m currently in my 26th year at Illinois Wesleyan University.

What’s your coaching style or philosophy?

Nelson-Brown: My coaching philosophy has and will always be Faith and Family, Academics and Volleyball. I encourage all of my players to get involved both on campus and in the community. One of the components of our team is service, so many of our players give back close to 24 hours in a school year to our community. I’d say my coaching style is rather intense. I’m a competitor and want to win, so I try to instill discipline and commitment in each of the players.

What one or two things does the team do in training that are key to their success?

Nelson-Brown: We have summer workouts and a baseline test that is required to pass when they come in every fall. I think this holds them accountable, plus takes some pressure off worrying whether or not they’re in shape. I believe our program does a good job of staying disciplined and holding each other accountable.

Nelson-Brown: I’ve been fortunate enough to have several. I think anytime a player who’s struggled with a drill or a skill fixes it or has that “ah-ha” moment, I get excited for them! As for a team, it would be the 2018 team that finished the season ranked #10 in the country, won the CCIW, and advanced to the Sweet 16 of the NCAA Tournament.

Tell us about a person who inspired you to play/coach volleyball.

Nelson-Brown: First and foremost, my parents. From a very young age, they instilled in me hard work, discipline, and commitment. If you made a commitment to play a sport or do an activity, you finished it. If you chose to play a sport, you worked hard for your position; it was never handed to you. My brother was only 14 months older than me, so we grew up playing sports together with the neighborhood boys. I believe having to play against boys and us always competing made me stronger and more determined in anything I chose to do.

In regards to volleyball, my parents played in a church volleyball league, so I was introduced to the sport when I was in 3rd grade. I can remember my dad promising to buy me a volleyball if I made my 7th grade team. I walked away with a volleyball and of course, new volleyball shoes too!

Besides my family, I’d say my club volleyball coach Claire Donahue. Claire was the type of coach that taught us accountability, but also to challenge and push ourselves at a level that no other coach did. She didn’t coach us on our position, but expected us to know all positions. She believed in me before I believed in myself and what I could accomplish. For that, I will forever be grateful.

Describe the most memorable games/tournaments/championships your team has won.

Nelson-Brown: The 2018 team was pretty special. We had a 16-match winning streak; made it the furthest in the NCAA Tournament than any other team from IWU; and I had the privilege of sharing that experience with my daughter Tyler. Sharing four years on the court with her and never missing a game is beyond special and an experience I will cherish forever.

The other fun championship was the 1997 team. The year started with me going into labor with Tyler the first day of pre-season and it ended by playing for the championship in the CCIW tournament. We were down and fought back to win the match. We had several players who were hit with the flu that day, but it didn’t stop them from playing. They’d run off the court, get sick, and hop back in to play. They didn’t want to sit out and miss this opportunity to play.

What legacy do you hope to leave as a coach?

Nelson-Brown: I hope that every player who leaves our program knows that I care about them, whether they played all four years or not. I hope they learned that they can accomplish anything they set their minds to and that they’re so much stronger than they think. Lastly, I hope that we’ve set a standard here at IWU that continues well into the future. #PTRNLG

After an achievement like 500 wins, what’s the path forward for you as a coach and the Titan program?

Nelson-Brown: One day at a time and one match at a time! I love my job, this school, and our team. God willing, I will be able to keep doing what I love for a while longer. I don’t know if there’s another 500 in me, but while I’m here, I will continue to strive to take this program to another level. I feel blessed to have the opportunity to work alongside my daughter. Tyler is now a full-time assistant coach. She shares the same passion for the game that I do. Not only do I feel lucky to have the job I do, I now get to share it with someone who means the world to me and who’s grown up basically at the Shirk Center and in the game.