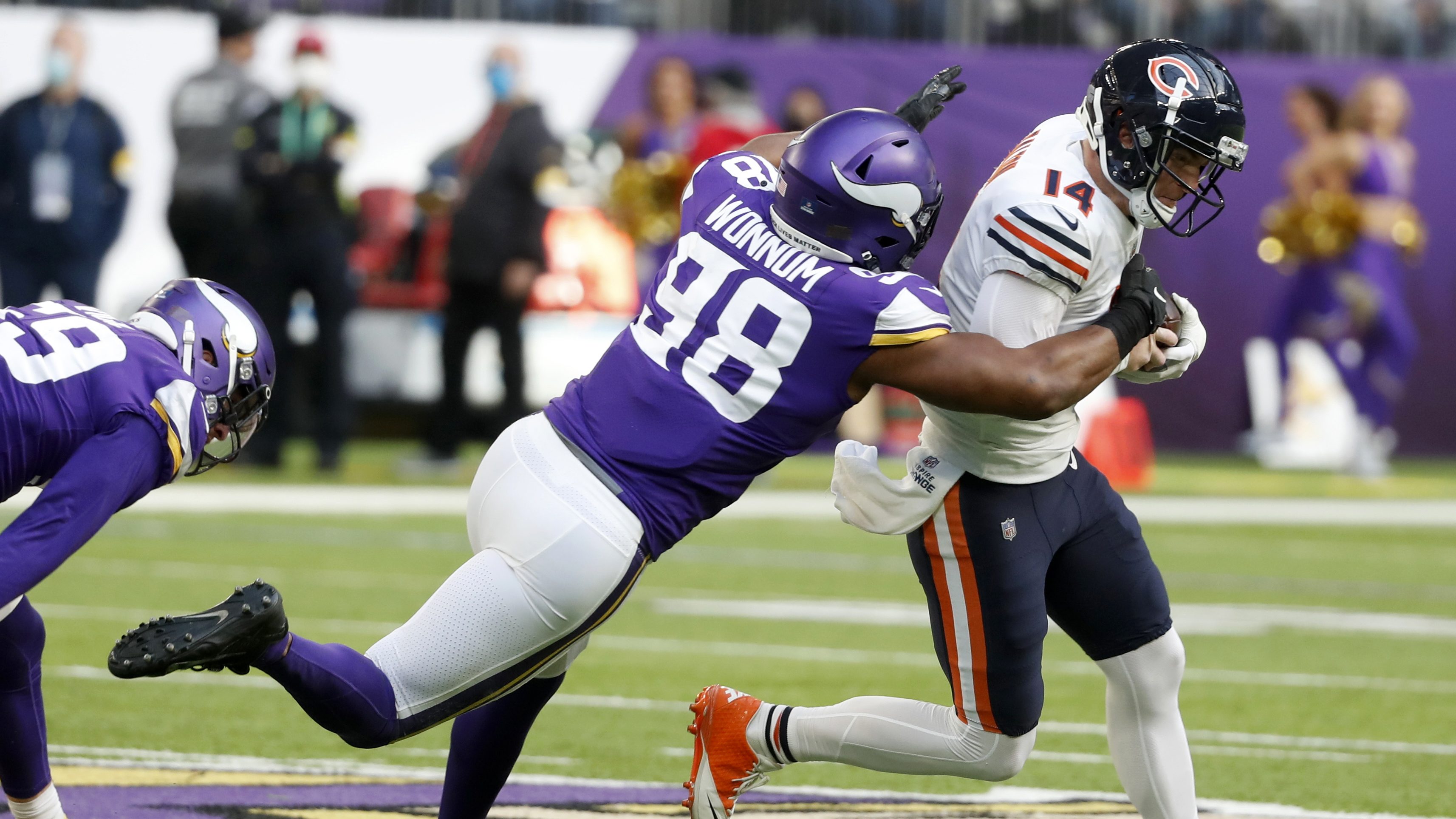 MINNEAPOLIS (AP) — Kirk Cousins passed for 172 yards and three touchdowns in the second half to lead a Minnesota Vikings comeback to beat the Chicago Bears 31-17 on Sunday in a matchup of two eliminated teams with a head coach in danger of being fired.

Justin Jefferson had the tying score and K.J. Osborn caught the go-ahead touchdown for the Vikings (8-9), who gave coach Mike Zimmer plenty to cheer in this pad-the-stats game while outscoring the Bears 28-3 after halftime.

Bears coach Matt Nagy elected to go for it on fourth down six times, failing on all but one of them. Andy Dalton took three sacks and threw an interception, and Patrick Peterson picked him off late in the fourth quarter and turned it into a 66-yard touchdown return.

D.J. Wonnum and Anthony Barr each had two of Minnesota’s seven sacks of Dalton, who went 33 for 48 for 325 yards and a touchdown pass to Damien Williams that gave the Bears a 14-0 lead just before halftime. The victory gave Zimmer a 72-56-1 record in eight years, including 2-3 in the playoffs. The Vikings have missed the postseason in three of the past four years.

Rookie Ihmir Smith-Marsette had 103 yards and a touchdown, Dalvin Cook rushed 14 times for 79 yards and Jefferson finished with 107 yards — leaving him 17 yards short of the single-season franchise record. Randy Moss set the 16-game mark with 1,632 yards in 2003. The crowd chanted “Let’s go, Justin!” when the Vikings took the ball for the last time, booing when they decided to kneel down to end the game rather than giving Jefferson another chance at the record.

The Bears had seven possessions over the first three quarters and reached at least the Minnesota 35 on each one. They had one touchdown and three field goals by Cairo Santos to show for it.

That’s because Dalton, the 11-year veteran making his sixth start of the season after rookie Justin Fields landed on the COVID-19 reserve list this week, took three fourth-down sacks for a whopping 35 lost yards. Two of those came on fourth-and-1.

The most costly one came early in the third quarter when Dalton scrambled on third-and-8 for what was initially ruled a touchdown, before a replay review reversed the call with his knee down just short of the goal line. Then Barr chased Dalton down for a 15-yard loss after he looped around behind the line of scrimmage looking for an open receiver.

Bears: DT Akiem Hicks (ankle), who created the usual havoc for Minnesota’s offense in the previous matchup on Dec. 20, was out for a seventh game this season.

Bears: Already locked into third place, Chicago will play the following third-place finishers in 2022: Houston and San Francisco at home and at New Orleans or Atlanta. The entire AFC East and NFC East divisions are also on the schedule for all NFC North teams. The Bears sent their first-round draft pick to the New York Giants for last year’s trade up to get Fields.

Vikings: By finishing second, Minnesota will face Indianapolis and the Los Angeles Rams or Arizona at home and play at New Orleans or Atlanta.