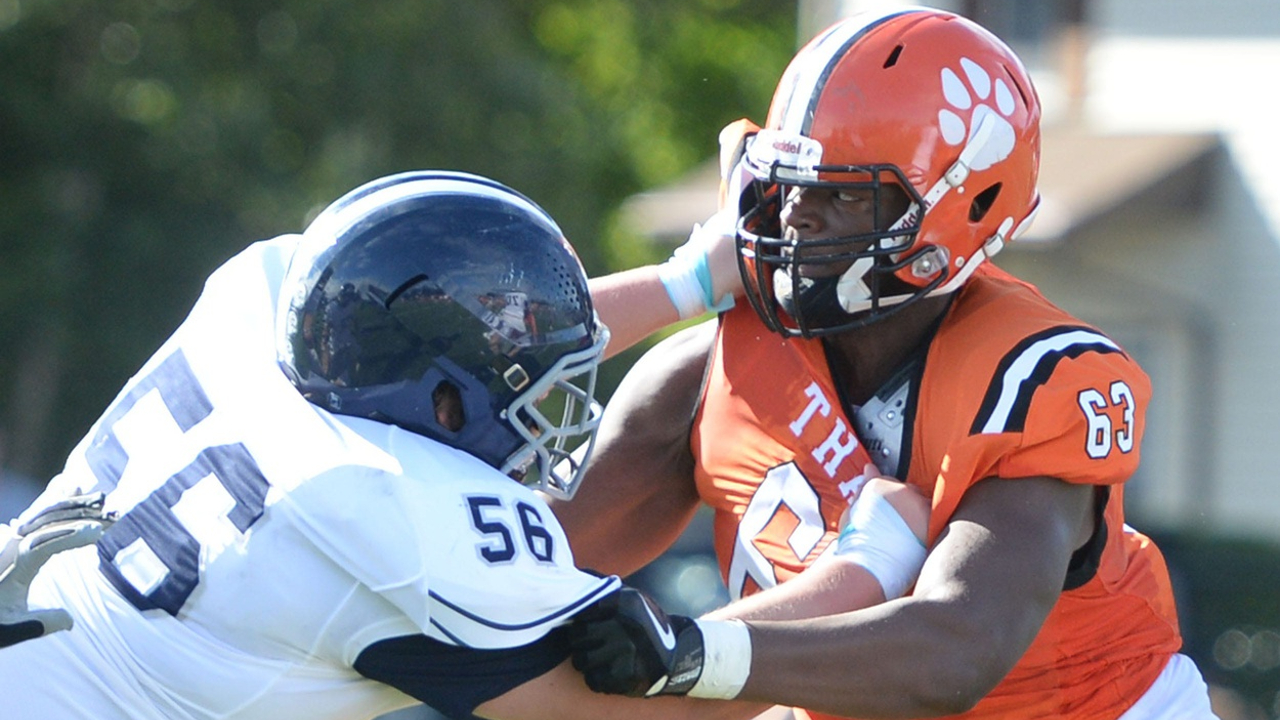 BRAINTREE, Mass. (BVM) — It’s not tough to spot the linchpin of Thayer Academy’s offensive line when the Tigers take the field on game days. Led by 6-foot-6, 295-pound junior Samson Okunlola, the team has found an irreplaceable component to not only its play on the field, but off of it as well.

“His athleticism is remarkable for a kid that size,” Thayer head coach Jeff Toussaint said. “He can run [and] he has great hand-eye coordination. Sometimes when we rep our scout team and need a scout punt return or kick return team he’ll sneak down and be the returner and I’ll have to get him off the field. He loves it… He just loves to play and has a real passion for being out there and competing. It’s contagious.”

The junior lineman has been a stalwart in the starting lineup since his freshman year with the program and has noticeably risen up recruiting boards throughout his three seasons with the program. Following his junior year, Okunlola currently slots in as the No. 36 player in the Class of 2023 according to 247Sports.

It wouldn’t take long for Toussaint to find out what he had in the star offensive/defensive lineman, noticing more than just his size in Okunlola’s freshman year.

“When he was… here two years ago, he was pretty technically sound for a freshman,” Toussaint said. “He’s only grown more because of his older brother. I think he was a big influence on Samson.”

For Okunlola, the opportunity to play with his older brother has been extremely beneficial. His brother, Sammy, a 6-foot-4 defensive end in his senior season at Thayer, has always been a help to his not-so-little brother. The two had played in different age groups growing up but have enjoyed the opportunity to group up at the high school level.

With Samson always being the tallest kid his age, it’s been no surprise he found early success with the Thayer program. In the seventh grade, Samson says he was around “6-foot-2 to 6-foot-3.” Even with his size, he’s made it a priority to work on the more technical aspects of his craft as he continues to play on both sides of the ball. The Tigers junior has been able to better himself by getting inside knowledge from playing on both sides of the line.

With his play over the last few years, Samson’s recruiting process has started to accelerate. The No. 1–ranked player in Massachusetts currently holds offers from nearly 40 Division I programs and says he feels “blessed” to be in the position that he’s in. As he awaits the summer to take his visits, Samson has gotten a first-hand look at the entire process with Sammy recently committing to the University of Pitt.

“It’s [been] good because I got to go on the visits that he went on and experience the recruiting before I even had to narrow down my own decision,” Samson said. “So, it was good to learn from how he made his decision and see how I can make my decision.”

With his future schedule planned, Samson is continuing his usual football offseason as he competes on the wrestling team. For the Tigers junior, wrestling offers a multitude of benefits for him, not only with conditioning, but with his play on the football field.

“If I didn’t wrestle, I would probably say I wouldn’t be as good as I am right now,” Samson said. “Wrestling’s really helped me lose weight quickly, and helped me get quicker on my feet. [It’s also taught me] how to use leverage better, how the body works, and just being able to get low quickly.”

His football head coach echoes the sentiment and has seen a real difference on the football field since he’s taken to the winter sport.

“Wrestling has helped him in a couple of ways,” Toussaint said. “It helps both physically and athletically. It’s a competitive thing because in wrestling, when you’re out on the mat… there’s no hiding, you’ve got to go. You can’t wave over to the bench and ask your coaches to take you out because you’re tired or you’re struggling. I think it makes kids better competitors and they derive a lot from it physically.”

Samson aims to release a top-10 “pretty soon” and has plans for college visits in June.