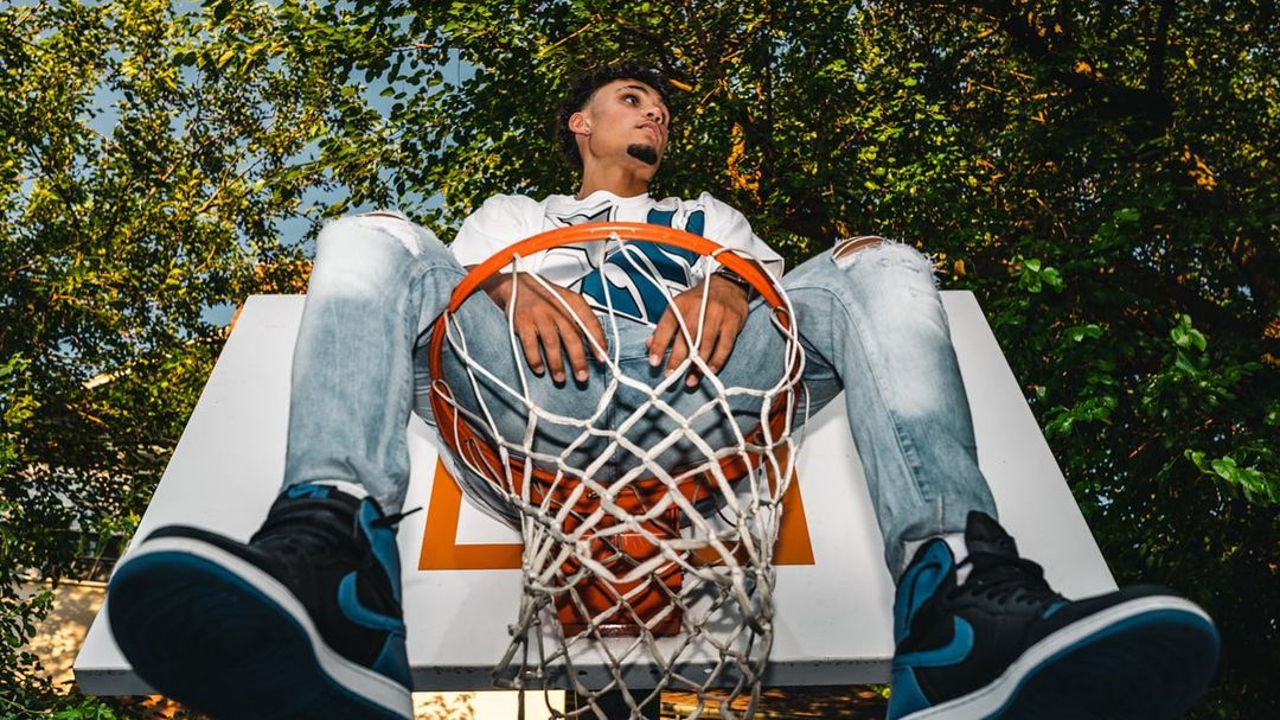 BROOKLYN, N.Y. (BVM) – Michigan guard Adrien Nuñez is embracing a diverse role in his senior season. With that comes the opportunity to share his experience with his younger teammates.

“I’m just accepting any role that I have, anything that I can help the team with,” Nuñez said. “As a senior, helping a lot of the younger guys with new drills that Juwan [Howard] will put in place and certain plays that have been put in since I was a sophomore. So just doing anything I can to help the team.”

The Michigan senior has seen it all throughout his time with the program, from deep tournament runs in 2019 and 2021 to post-season cancellations in 2020. Along with those experiences has come a new passion for Nuñez, who has found success off the court by bringing his personality to the forefront.

When Nuñez entered the Michigan program, the then-freshman guard hadn’t quite acquired the social media following that some of his fellow teammates had accrued. In fact, he had the lowest following count of his teammates on their shared platforms.

As rumors swirled of a new image and likeness policy, Nuñez decided he needed to get to the forefront of the movement. As the pandemic halted basketball activities, the Brooklyn native would take advantage of the extra time he had received.

“I had heard that NIL was a possibility, so I was like, I need to get some Instagram followers,” Nuñez said. “We had so much time that I was like, this would be a good way to gain some followers. So, I just started recording TikTok’s everyday after my workouts. Then it just morphed into what it is today which is pretty funny.”

With the goal of gaining followers on Instagram, Nuñez would stumble into the up-and-coming social media juggernaut, TikTok, where he would start by making videos displaying his basketball workouts and life as a student-athlete. The daily posts have since transformed into a hybrid of day-to-day content and videos with his girlfriend, former Shawnee State basketball forward, Carson Roney.

The rise in popularity for Nuñez is based on one critical aspect: consistency. That’s why the transition to social media has been the perfect fit for the Michigan guard who’s had to find a routine on and off the court.

“I feel like it’s more [about] consistency, just like with anything,” Nuñez said of his strategy for social media. “I approach everything I do pretty much the same way, whether that’s basketball, school, or the social media world. Just showing up everyday is 80% of the battle so with basketball, I’ve been doing the same routine everyday, either before or after practice since I got here. With school, I always have my allotted times for me to do things and I just added another slot with social media.”

Nuñez’s success on the platform has resulted in over 3 million followers on TikTok and nearly 200,000 on Instagram. The rising recognition has allowed Nuñez to cash in, with the Michigan guard cracking the top 10 of ESPN’s list of most marketable college basketball players. Nuñez has gone on to sign with talent management group Outshine Talent, who have recently added a host of social media stars.

“Going in these huge mansions in Los Angeles with these huge social media people is pretty weird because I’m so used to the basketball world and it’s like two completely different worlds,” Nuñez said of the exciting parts of his newest endeavor. “It opened my eyes a lot to a different way of living and just being able to meld those two worlds together because I’m like coexisting in each of them right now.”

Recently, Nuñez has been able to market his social media presence by partnering with Hulu and Coca-Cola for sponsored Instagram posts and has become a Cash App partner on TikTok. With expected changes to NIL in the future, Nuñez has become part of the first generation of student-athletes benefiting from the policy.

“It’s been huge,” Nuñez said of the NIL policy. “It’s made it sustainable for me. You can only do something for free for so long where it becomes monotonous… So, I feel like NIL is everything right now. It’s why I’m still doing it, why I started. Seeing the way that world operates and seeing how the whole business side of it and the behind the scenes of that has been really eye-opening as well.”

His Michigan head coach discussed the NIL changes this October and the former player sees the benefit it can provide college athletes and programs around the country.

“I’m happy that all the student-athletes on the collegiate level get an opportunity to really maximize their brand and take what they have grown, as far as, working extremely hard as student-athletes on college campuses and allowing themselves to become their own CEO’s,” Wolverines coach Juwan Howard said on the Big Ten Network. “I’m excited to see what it’s all going to look like in the future. Right now it’s still early.”

As Nuñez navigates through uncharted territory, his main focus is still on this year. He says he has general goals for the future but is trying to do the best he can right now with everything he is involved with. As Michigan hits the halfway point of the season, Nuñez will look to close things out on a high note before moving on to his next chapter.

“I’m not really sure right now,” Nuñez said of his future plans. “I’m focusing on the season, really. Putting 100% into basketball, 100% into academics, 100% into social media, so I’m not looking too far ahead.”