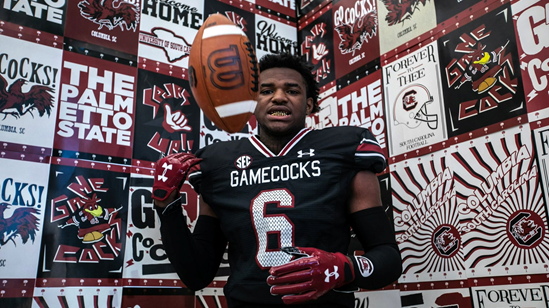 LAKE CITY, Fla. — The state of Florida is known for pumping out top-tier Division I athletes. But not many are faster than Tray Tolliver.

The 5-foot-9, 170-pound junior wide receiver is a three-star on 247Sports. The deep threat is dangerous any time he touches the ball with his 4.39 40 time for Columbia High School.

This has caught the attention of schools across the country as he has received offers from Cincinnati, South Carolina, Louisville and others.

Tolliver more than likely would have received more offers throughout his junior season if it was not for a devastating injury in the third to last game of the season on his birthday.

In an emergency quarterback role, Tolliver was stopped on a quarterback draw by the defensive line. The play resulted in a torn ACL, LCL and meniscus.

“My leg snapped,” Tolliver said. “I planted the wrong way and it just snapped.”

For most, this is the type of injury that could derail a career. For Tolliver, it is just a small bump in the road.

“I’m ahead in my physical therapy,” Tolliver said. “I’ve been working really hard to get my legs back. I started walking in four weeks and I wasn’t supposed to start walking until two months.”

Thankfully, Tolliver is on track to have a full senior season and make a full recovery.

With Tolliver missing a couple of games in his junior campaign, his stats stand out even more.

He finished the season (nine games) with 25 receptions, 532 yards and 11 touchdowns. Four of the 11 touchdowns came in the return game.

Being a special teams contributor is the quickest way to a coach’s heart and the key to more playing time at the next level. When Tolliver returns a kick, the physical ability that he possesses pops in a similar way to the guy he emulates his game after: Tyreek Hill.

“He’s got the same speed as me,” Tolliver said.

When you have that type of game changing ability, there will always be room for you on a college roster and possibly beyond that.

If all goes to plan for Tolliver, he will be a dynamic playmaker for a collegiate offense that can showcase his abilities. This would help him accomplish his biggest goal of going to New York City and accepting the Heisman trophy.

“I’m always working to be the best,” Tolliver said.