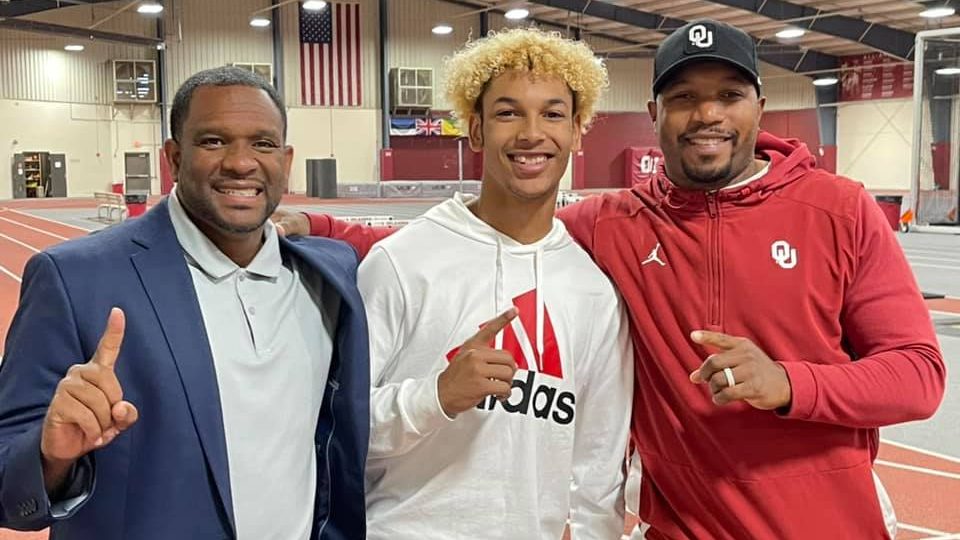 JOPLIN, Mo. (BVM) – While Donovyn Fowler may have once thought his future may reside in football or basketball, his quick emergence in track and field – specifically in the long jump and triple jump – has many taking notice.

Throughout his middle school years, Fowler competed on a travel basketball team. As he got into high school, the 17-year-old continued to compete on the Joplin High School football team. However, it was in eighth grade when Fowler got some advice from his mom that led him to his true calling.

“My mom was like, ‘Hey, you should try track instead, it will get you in shape a little bit more,’” Fowler said. “So that’s how I kind of found out about track. What really attracted me to it was just how many of my friends were actually doing it. I’ve found a lot of friends that I never would have met before if I didn’t do track.”

One of those friends was Fowler’s cousin, Trayshawn Thomas, who he grew up with in both football and track and field. Thomas now plays football collegiately at Missouri Southern State University, but Fowler has taken away a lot from their tight bond.

“Getting to actually train with my cousin over the high school seasons, it really meant a lot,” Fowler said. “He’s always pushed me … I’ve always looked up to him.”

Not only did track allow Fowler to make further relationships, but he also proved early on he had an immense talent, particularly once he began competing in his main events of long jump and triple jump later into his first season.

Great speed and jumping ability led Fowler to an opportunity to compete at the AAU Junior Olympics after his eighth grade year. It was at that meet that Fowler realized his true potential.

“I competed in Junior Olympics for long and triple jump,” Fowler noted. “I ended up going to finals and placing at both. That’s when me and my parents really found out that I could do something special for track.”

As he entered high school, Fowler began competing at Joplin as well as with the CJ Freedom Track Club, helping him further develop his skill. Coming off a strong freshman season, Fowler continued to compete locally and nationally up until the spring of 2020, when he lost his sophomore season to the COVID-19 pandemic.

“We were in the middle of a practice when our coach got the call that our season was going to be canceled and we were all heartbroken,” Fowler explained. “I really feel like if I had my sophomore season back, I could definitely have improved past where I am now. But thinking back on it, I really just think of it more as a training season.”

Although he didn’t get to compete in any high school meets, the time was still beneficial for Fowler, as he continued to train and workout with his father, who has been a huge part of his physical progress.

“He’s been a major part of my development,” Fowler said. “He’s definitely been learning with me as I go because he was never a track athlete like I am. But he’s been trying to pick up some new things, some new drills and lift types that we can use to better myself.”

Fowler also took frequent bike rides with his mom throughout the early stages of the pandemic, helping him stay in shape. The extra work put in had Fowler in position for a breakout junior season, and he took full advantage.

He would go on to finish in the top five at both events at state – a good cap to the season, but also a motivator for his senior year.

“It was kind of hit and miss,” Fowler said. “It was a little bit of a bummer.

“As far as this outdoor season goes, my main goal is to win state in both long and triple jump, and this year, I think I have a really good chance at that.”

Even more motivated than before, Fowler continued to put in work throughout the remainder of 2021. He now has three meets left in his indoor season, with a couple of big ones coming up in Arkansas and Chicago. It continues a stretch of numerous prominent events that Fowler has been in, becoming more comfortable each time he competes.

“Those bigger meets have actually kind of trained me to not be as scared as I should be,” Fowler noted.

Then, it will be off to the outdoor season where Fowler hopes to accomplish his state championship goals. Going into the year, Fowler will remain ranked in the top five nationally in both events in his class, an honor but also another motivating factor for the senior to get to the top.

“I think it’s really cool because people in the surrounding area also see how good I am and they see how much work I’ve put in over the years,” Fowler said. “I’m really happy that I did the things that I did to get me to the point where I am. Thinking about how I could improve in my numbers, that really motivates me.”

No matter his rank, there is no doubt any collegiate program would have been lucky to have Fowler. That school will be the University of Oklahoma, as Fowler officially signed his national letter of intent to become a Sooner last month.

At Oklahoma, Fowler will join forces with the nation’s top triple jumper, Brandon Green of Louisiana. Recently, the Joplin senior has been able to form a relationship with Green, and believes the sky’s the limit when it comes to what both could achieve during their time with the Sooners.

“For me individually, I definitely want to be an All-American, for hopefully both events,” Fowler said. “When I was on my visit there, he [Green] was on his visit, so we kind of got to know each other a little bit better. Being now how we’re actually kind of close, I’m really excited about what the future is going to look like at Oklahoma because we’re both really good athletes that are going to push each other as far as we can.”

While the future in Norman is bright for both athletes, Fowler has no intention of stopping his career there. Whether it be competing in the Diamond League or the Olympics someday, Fowler is prepared to put in the work to accomplish his dreams while at Oklahoma.