CLIFTON, N.J. (AP) — Minjee Lee had an eagle-birdie run on the back nine and took a one-shot lead over Madelene Sagstrom on Saturday, heading into the final round of the Cognizant Founders Cup.

Lee, the LPGA Tour’s leading scoring this year, shot a 3-under 69 on a day Upper Montclair Country Club showed some teeth with the wind picking up early and rain falling on the leaders for the final 11 holes.

The 25-year-old Australian who had a three-shot lead at the halfway point, was at 17-under 199 after 54 holes. She’s looking for her first win of the year and seventh on tour.

Sagstrom, the Swede who had the first-round lead after a 63, had the best third-round with a 67. The 29-year-old is seeking her second win.

Lexi Thomson started the round tied with Sagstrom at 11 under, and was alone in third, three shots back after a 69. She might have been closer to her first win since 2019 but she just missed at least five or six putts.

“The weather was a big factor, it got quite wet on the greens,” said Sagstrom, who briefly moved into a tie for the lead with a birdie at the par-5 12th as Lee bogeyed No. 11 after an errant tee shot.

Lee followed with the eagle and birdie on putts ranging from 15-to-18 feet and never lost the lead.

Angel Yin shot a 68 and moved into fourth place at 11 under.

Ally Ewing, who was tied for second after two rounds, never got anything going in posting a 74. She was tied for fifth at 9 under with Paula Reto of South Africa and Megan Khang.

Nasa Hataoka of Japan, who won in Los Angeles last month, was in a group nine shots off the lead. Jennifer Kupcho, the winner at Mission Hills in the first major of the season, also was 8 under.

Two-time defending champion and No. 1 ranked Jin Young Ko of South Korea was far back at 5 under.

Anna Davis, the 16-year-old lefty who won the recent Augusta National Women’s Amateur, remained at 4 under after shooting par. 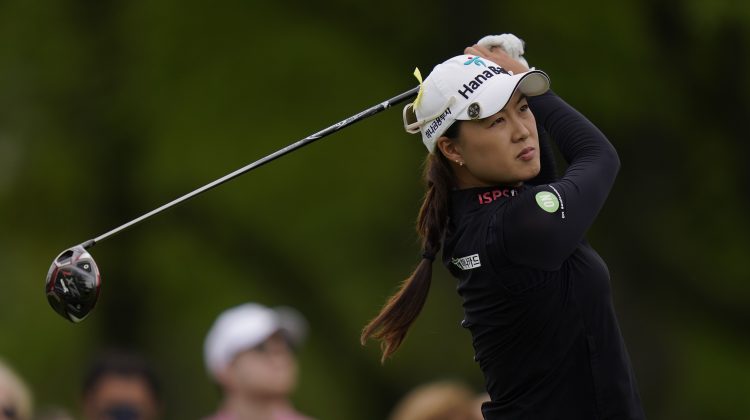