SPRINGFIELD, Mo. (BVM) – Growing up, Zaide Lowery always thought football would be his future. Until eighth grade, that was his main sport, and he continued playing it as he reached Kickapoo High School.

After a year with the freshman team, Lowery made the leap to varsity in his sophomore season. In his first game at that level, the wide receiver caught multiple touchdowns, proving his promise on the gridiron.

At one point, it seemed his high potential might lead him to a college football career as Lowery had interest from schools and dreamed of playing someday at Ole Miss.

“I was a football player and my dream school was Ole Miss to go to college for football,” Lowery said. “But then, basketball kind of became my thing.”

Lowery began playing basketball seriously in eighth grade. While that’s a later start in the sport than many of his peers, it has not had much of an impact on the junior’s elite skill level. Coming into Kickapoo, Lowery watched some of the high school players before him compete, and from then on he was sold on giving basketball a try.

“Me watching some of the high school players before I got to high school, watching them play,” Lowery said about how he became intrigued by basketball. “And just playing a different sport other than football.”

Since that point, a star has been born. After playing on the freshman team in his first year, Lowery moved up to JV as a sophomore, and was eventually called up to varsity.

“I was playing on JV and then I went up to varsity towards the end of the season,” Lowery said. “When I moved up, it was a good experience for me just to be out there with some of the players we had and some of the teams that were a little bit better than I had seen in the past couple of years.”

“It was a really good feeling,” Lowery said. “That was my first time in an arena like that. I feel like we had a very good team with four Division I players that were pretty good.”

However, with several of those players graduating from Kickapoo last year, it was Lowery’s turn to take over as a true leader in his junior season, and he did just that. Averaging 15.5 points and 7.1 rebounds while shooting 55% from the field and 38% from three, Lowery became a true star for the Chiefs.

“I knew once they left that I’d have to step up,” Lowery said. “The goal I had was to make it to state.”

Although Kickapoo would fall short of that goal after losing in its final game in districts, it was still a productive season for Lowery, nonetheless. Now, he hopes to build on that by the time he takes the floor again for the Chiefs next fall.

“My goals are kind of the same,” Lowery said. “I’m hoping to get close to 1,000 points and just get better each year. I think right now it’s just about me getting better, getting in the gym and working hard.”

While Lowery continues to impress during his high school career, what has really gotten him noticed is his time playing AAU basketball with Missouri Flight. The 6-foot-4 guard joined the program back in eighth grade after trainers introduced him to the coach. Since, he has developed into a tremendous scorer, finisher and all-around player, particularly displaying his immense talent last summer, and continuing to do so this year.

@LoweryZaide is a special dude. Where he commits will be getting a player. https://t.co/e0Mw9HAbai

“I’m very thankful for it,” Lowery said about the Missouri Flight program. “When I met the coach, that’s when I started playing up and ever since I’ve played one grade up so it’s kind of normal to me now. But I think my best AAU season was probably last year. We had a couple of games that we lost but I scored a lot of points and that’s where I got most of my offers off of.”

Over the last three years, the guard has become a four-star recruit who is ranked near the top 100 nationally in the Class of 2023 and in the top five in the state of Missouri. While proud of his rapid rise, Lowery also continues to be motivated to move up in the rankings.

However, the Kickapoo standout shouldn’t have to worry about his standing much in his senior season as he recently found his college home. The recruiting process started for Lowery as he dazzled on the court last summer. From there, a couple of the main schools that were interested in him took notice.

“It was last summer when we went to Atlanta,” Lowery said. “I had a 36-point game and we lost the game in overtime. After that game, the Marquette coach was there and I think maybe the Kansas State coach. The first offer that I had when I came back from the weekend was Missouri State. And then, after that, that’s when I got Kansas State and then Marquette.”

Marquette would go on to offer the guard in July, and he took an official visit to campus in February. In the end, the Golden Eagles won out, as Lowery saw the program as a terrific fit.

I’d like to thank everyone that has supported me this far. I’ve made the decision to commit to Marquette University!! #mubb 🦅@flightbball417 @PooBasketball @tammarag pic.twitter.com/tIRa6adwrl

“They talked to me everyday, still up until this point,” Lowery said. “I liked the coaches and when I visited there the players were cool. It just seemed like a good environment to be at. They made me feel like they wanted me there.”

Throughout his recruiting process, Lowery was able to form a strong bond with Marquette assistant coach Neill Berry, and of course, head coach Shaka Smart. Getting to play for one of the top coaches in college basketball and with an up-and-coming program has created plenty of excitement for Lowery.

“Watching some of their games, I know they’re a high, energetic team,” Lowery said. “They’re big on a whole bunch of defense so that’s what I’ll try to focus on. Our relationship has been pretty good. They talk to me everyday, I call them sometimes and they just make sure I’m doing alright. I’m really excited to be there with them.”

Not only is Lowery excited, but he is also set on making an immediate impact for the Golden Eagles. While he knows it will be different than the level he’s at right now, Lowery thinks he will be able to prove himself early on.

“It’s going to be a different experience than high school,” Lowery said. “It’s going to be faster paced and a bigger-level game … I feel like I can bring defense like they tell me all the time, and if you play defense the offense will come. I just want to get there and as a freshman just work hard. That way, I can show them that I can play at that level.”

While he has only played basketball seriously for a few years, Lowery has already become an upper-echelon talent, leading many to wonder just how far his career can take him. Although he doesn’t watch much NBA basketball, Lowery is hoping that by the time his Marquette career is done, he may become the next Golden Eagle to shine at the pro level.

“Something I’ve thought about after playing there is making it pro to the NBA,” Lowery said. “I know it’s going to be way harder than people think and people know. It will be a challenge, but it won’t be as hard as you think if you just keep working and keep your head on straight.” 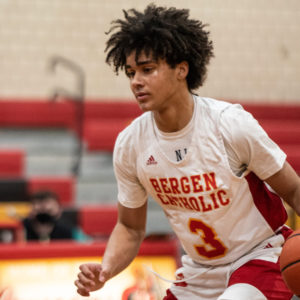