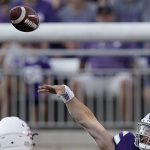 MANHATTAN, Kan. (AP) — Kansas State quarterback Skylar Thompson is unlikely to play against sixth-ranked Oklahoma on Saturday, even though he is making progress from a knee injury that he sustained in an early victory over Southern Illinois. Wildcats coach Chris Klieman said Tuesday that Thompson, the sixth-year senior who took some warm-up snaps before […]