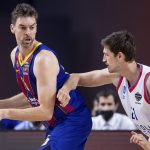 MADRID (AP) — Pau Gasol announced his retirement from basketball on Tuesday, ending a career that lasted more than two decades and earned him two NBA titles and a world championship gold with Spain’s national team. The 41-year-old Gasol had already announced his farewell from international basketball in August after Spain lost to the United […]