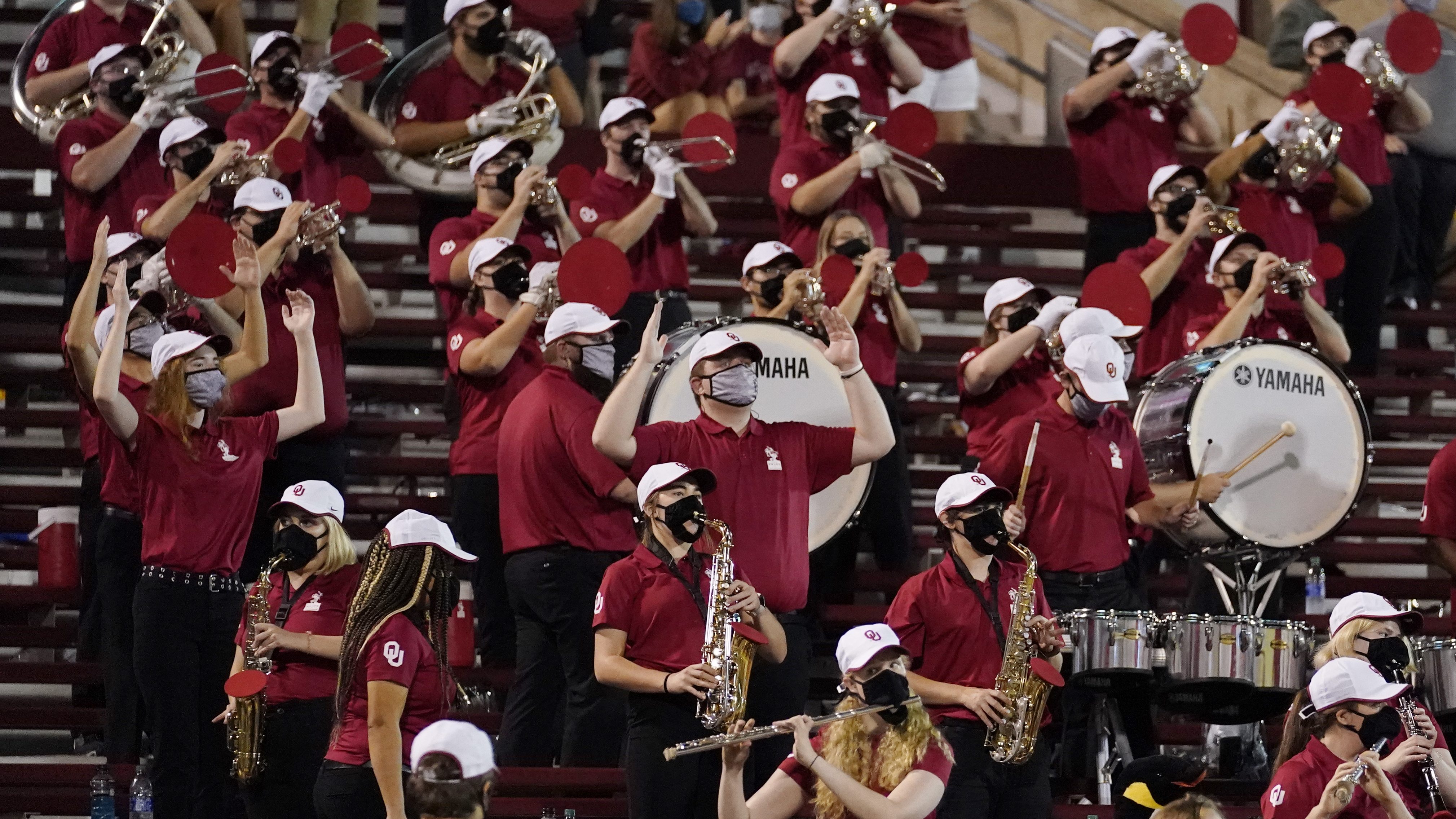 NORMAN, Okla. (AP) — As the Oklahoma marching band’s rendition of “Sweet Victory” filled Memorial Stadium, everything was in place on the field.

More than 300 Pride of Oklahoma members formed a perfect pattern from one goal line to the other during an elaborate performance for the game against Kansas State. The sharp tweet of a whistle kicked off songs from familiar TV shows. Crimson and cream flags waved in unison under the stadium’s bright lights.

One critical element was absent — a crowd, unless you count a few carboard cutouts. Instead of entertaining tens of thousands of Sooners fans live on a Saturday afternoon, the band put its show together in an empty stadium on a Thursday night — the trumpets’ bells covered amid concerns about spittle, not far behind the baton twirler moving effortlessly in the middle of it all.

The band isn’t allowed on the field at games due to the pandemic, so Brian Britt, Oklahoma’s director of bands, has decided to record performances in advance and have them played on the big screen during games. It’s a way to keep some semblance of the pageantry that has largely been lost in this unusual season.

Marching bands, part of the game since its beginning more than a century ago, are idled or toned down across the country. They won’t be able to perform in front of the usual crowds. Some are performing in reduced numbers and others are doing virtual performances.

Many can’t get together to create the family-like atmosphere they are known for because of class size limitations and social distancing rules on campus.

“Much of what makes our band experience special has been altered, and you can really feel it,” Oklahoma drum major Paxton Leaf said.

At Ohio State home games, marching band members stream onto the field to form a cursive Ohio known as “Script Ohio.” After the word is fully formed, a tuba player struts over to “Dot the i,” and the crowd roars.

That won’t happen this year. Although football recently has been given the go-ahead in the Big Ten, the conference isn’t allowing bands to perform on the field.

“My heart especially goes out to those who were slated to dot the i this year in the script Ohio,” Ohio State director of bands Chris Hoch said. “Those seniors — some of them who have been working for this since they started playing tuba in fourth or fifth grade — aren’t going to have that opportunity this year.”

In the past, Oklahoma’s band has come together for weekly meals. That is gone. The crowds at games are a fourth of their usual size, eliminating of the energy they usually generate.

It’s not the same, but at least it’s something.

“For all of our seniors, it was really important to get this done,” Leaf said. “It felt like the rug got yanked from underneath us in March. We were getting ready for everything to start and of course, everything started to happen all at once.”

Oklahoma has divided its group into four 80-member pep bands, each of which will perform from the stands — socially distanced, of course — at different home games. With the smaller numbers, the six hours the band normally spends preparing on game days has been reduced to two.

“We can’t look back at last year and compare what we’re doing this year to that,” Britt said. “What we have to compare this year to is a blank slate of doing nothing, because there are a lot of places where that’s what’s happening. There’s no band at all.”

Oklahoma twirler Emily Perkins performed at the season opener against Missouri State, but she was in a confined area in the stands. She said she’s making the best of it.

“It was a little different,” she said. “I couldn’t do that much of what I normally do because what I do requires a lot of space, and if I was to toss (the baton) really high, it could go anywhere, so I had to be a little more careful.”

At Texas, the Showband of the Southwest and its iconic “Big Bertha” bass drum were sidelined for Texas’ first home game against UTEP on Sept. 12. The school has so far limited stadium capacity. School officials have said the band will have no more than 60 musicians if and when it does return.

Michigan band director John Pasquale said his students have not met in person. He said he is putting together two halftime shows virtually.

“Each band member individually records a piece and we edit it into a video,” Pasquale said. “We’re not exactly sure what that is going to look like yet. We’re trying to find creative ways to feature our students other than in the stale, “Brady Bunch” style on video.”

The limitations at Ohio State, Michigan and Texas are exactly why Leaf is so thankful for what the band can do. He said that though the full band doesn’t get together as much, greater effort has been made to build connections within smaller groups.

“In the fire and flames of the world around us, we have been able to use our love for band to create a tight-knit family working even harder for each other to perform at a high level,” Leaf said.