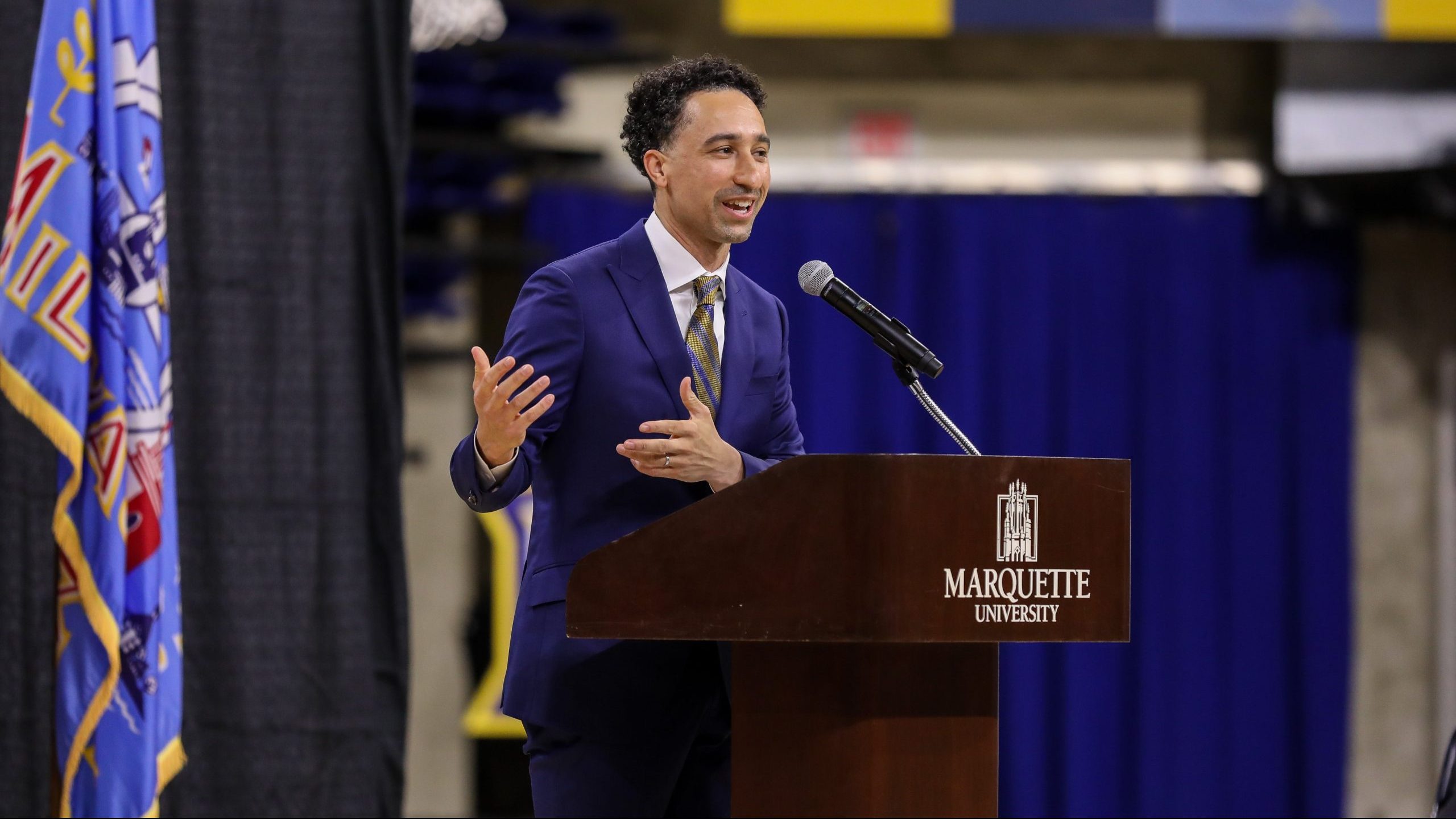 MILWAUKEE (BVM) – Born in the state’s capital of Madison and educated at nearby Oregon High School, Shaka Smart is back home in Wisconsin ready to lead the Marquette Golden Eagles.

“I’m so excited to be a part of the Marquette nation,” Smart said.

“I take a lot of responsibility and pride in being the first Black head coach here,” Smart said. “Especially because this is Doc’s (Rivers) school and because of what he’s done and I’m going to be leaning heavily on him.”

This is a significant moment for Marquette basketball which rose to prominence in the late 1960s behind Al McGuire, the coach of the then-Warriors’ 1977 NCAA national champions (coincidentally the same year Smart was born). McGuire was one of the leading forces of equality in the college game, largely recruiting Black student-athletes to play for him and help put Marquette on the map.

Smart, 43, is no stranger to having strong recruiting classes and has coached a nice collection of NBA talent during his time with the Rams and Longhorns over the past 12 years. Most recently at Texas, Smart coached one-and-done standouts Jaxson Hayes, Mo Bamba and Jarrett Allen and inherited Isaiah Taylor in his first season in Austin. At VCU, Smart coached the final year of Larry Sanders’ Rams career as well as the likes of Troy Daniels, Treveon Graham and Briante Weber.

“We want to recruit guys that value relationships, growth and victory,” Smart said. “One of the best ways to build the culture that you want to have is to bring people into your program that have a similar view of how to play basketball, how to train and how to conduct themselves off the court.”

Spending six seasons each at his previous head coaching destinations, Smart has coached in the Colonial Athletic Association, Atlantic-10 and Big 12, winning conference tournament championships in each league. This is a trend Marquette certainly hopes continues considering it’s never won the Big East tournament since entering the conference in 2005.

“Long-term, you want to have seasons where you’re able to put something up in the rafters,” Smart said. “Whether it’s a Big East regular season championship, a Big East tournament championship. You know the ultimate goal is to advance to the Final Four and beyond.”

Smart’s VCU Rams (2009-2015) had the most postseason success of his teams reaching the NCAA Tournament five straight seasons, going 7-5 in the Big Dance, including a trip to the 2011 Final Four. At Texas (2015-2021), Smart’s Longhorns appeared in three NCAA Tournaments, but failed to get out of the first round.

This past season, Smart’s team was ranked as high as No. 4 in the AP Top 25 and entered the NCAA Tournament as a 3-seed in the East Region of the bracket before ultimately falling to 14-seed Abilene Christian, 53-52.

Despite the lack of recent success in the NCAA Tournament — three of Smart’s last five early exits have come in overtime — it’s the defensive consistency of his squads that has the Golden Eagles flying high with their coaching hire. According to KenPom, his last 10 teams have all ranked inside the top 40 in the nation in defensive efficiency. Marquette has had one such team in that time, ranking 14th for the 2011-12 season under Buzz Williams.

“I’ve always loved playing an aggressive brand of defense,” Smart said. “Being disruptive to the other team, taking them out of what they do. At VCU, we called it ‘Havoc.’ But really that was more a mentality than any particular full court press or way of defending you. It was a mindset that, ‘Hey, we’re going to take you out of what you’re trying to do.’ And that’s exactly how we want to play here…

“We always want to force 32 or more deflections — that’s a big stat for us.”

Excitement is in the air in Milwaukee and Shaka Smart is determined to deliver for the Golden Eagles. His first business to tend to will be meeting with the returning players on the roster and incoming recruits that already signed their NLI to get everyone on the same page and ready for this new era of Marquette basketball.

“I think they’re really excited about the possibilities moving forward of what we can do together. … When you go through a change it’s challenging,” Smart said. “It’s our job as coaches to build relationships such that there can be a level of trust, but that doesn’t necessarily happen overnight — it takes time. And just excited about spending time with those guys to do that.”